A Personal Touch: Sir Robert Southwell and the Duke of Ormond 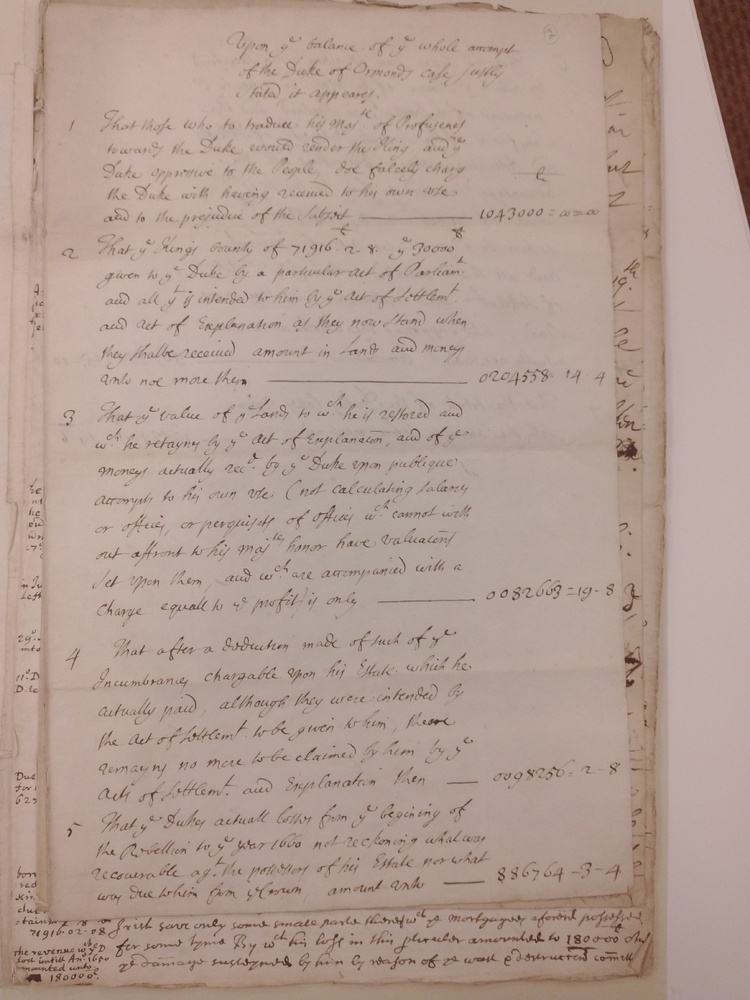 After having had the preliminary research taken care of, I next moved on to the document itself, and right away I found what I thought showed signs of a possible personal connection between Southwell and Ormond, which would in turn would lead me to air on the side of caution when taking Southwell at his word as an author. We can see this right from the beginning, on the second page of the notes, when Southwell laid what could only be described as a clear rebuttal of charges of corruption against Ormond Indeed, he directly attacks the claims of corruption as follows: “That those who traduce his Maj[este] of Profusenes toward the Duke would render the King and [the] Duke oppressive to the People, doe falcely charg the Duke with having received to his own use and to the prejudice of the Subject 1043000.”[3] Ormond, throughout his career, was seemingly a lightning rod for charges of excess and of nepotism, and accordingly what it appeared the defense sought to do was to head off the claims before the reader got too far into the document. As his defense demonstrates his reliance on the monarchy, his audience was expected to be at least sympathetic to the Stuarts if not outright royalist in politics, as this was an appeal to a sense of loyalty to the King as opposed to simply claiming that the charges were maliciously intended.

By attempting to turn the defense of Ormond’s accounts into a defense of His Majesty’s wishes,[4] it seemed in my eyes that Southwell was attempting to, at the very least, plant seeds of distrust and hostility in the reader’s eyes to the charges so as to make the audience more open to the notion of the Duke’s innocence. This defense was noteworthy to me due to the fact that the Duke was also a man who sponsored and supported Southwell early on in his career, being something of a patron.[5] As such, it made sense to me that Southwell might have felt obligated to provide a spirited defense for his patron out of personal loyalty; the purpose of Southwell, shown through his early defense of his friend’s accounts and claim that prosecution amounted to subverting His Majesty’s will, was to exonerate a friend of his as opposed to simply telling events as he saw them.[6] This is only further supported by the fact that Ormond had relied on Southwell in the past to pen defenses of his conduct and to help push his narrative to the public.[7]

As such, this document could have been seen as an example of Ormondist propaganda, due to the close relationship between Ormond and Southwell and his past work in defending the Duke’s reputation;[8] his early defense and equating of Ormond’s conduct to being a reflection of the King’s will only supported this notion while I was reading the document. Accordingly, I really would have to be wary of offering too much weight behind what Southwell said of the Duke. Because he was quite clearly personally invested in the manner in which Ormond was perceived, I know that if I were to use this in any sort of writing, be it on the English Civil War or on the Restoration, I would have to be particularly cautious around this. Normally in my work, I try to crosscheck my sources even after I’ve already accomplished the preliminary research and treat everything with a grain of salt, so to speak, but this process would therefore be a lot more important for me here with Southwell. I believe that it always pays to be skeptical when dealing with sources, regardless of whether or not the author is open about their own motivations, but especially so when the author isn’t shy about it. Indeed, I would argue that there is no such thing as an unbiased source here for the reason being that the author then is as human as the reader is today; accordingly, the author will be naturally shaped by their past experiences and their own attitudes, reflected then in the writing. The issue itself has nothing really to do with whether or not the author has an agenda, in my eyes that comes with the territory of history; the issue only arises if I fail to do the work required to spot the agenda and guard myself accordingly.

[2]This excerpt is transcribed by Keegan Matthews and Anna Siebach-Larsen. Southwell, ““Sir Robert Southwell Notes for a Biography on the Duke of Ormond,” p.2

[3] Southwell, ““Sir Robert Southwell Notes for a Biography on the Duke of Ormond,” p.2

[4] Southwell, ““Sir Robert Southwell Notes for a Biography on the Duke of Ormond,” p.2

[6] Southwell, ““Sir Robert Southwell Notes for a Biography on the Duke of Ormond,” p.2

← On the Research: How I Approached the Document
Why it Matters: On the Value of Caution with Sources →
A Personal Touch: Sir Robert Southwell and the Duke of Ormond