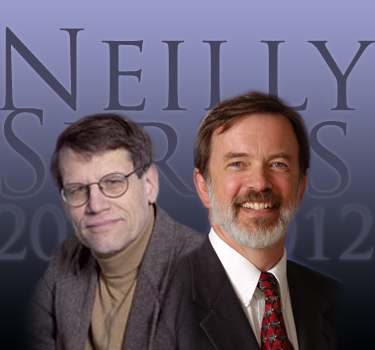 Roger Easton, Professor at RIT's Chester F. Carlson Center for Imaging Science, and Keith Knox, UR alumnus and retiree from Xerox Corporation, will present "Ten Years of Imaging between (and through) Lines of the Archimedes Palimpsest" on Thursday, February 23rd.

Dr. Easton and Dr. Knox will discuss the Archimedes Palimpsest, a circa 10th-century parchment manuscript that includes the oldest known copies of seven treatises by Archimedes. This talk will consider the entire restoration project, with emphasis on the imaging and processing techniques used to clarify and enhance the texts.

The pages of the text were erased and overwritten early in the 13th century to make a Christian prayer book. The manuscript was sold at action in 1998 and lent by its new owner to the Walters Art Museum in Baltimore, which has led the collaboration of conservators, imaging scientists, and scholars to preserve, image, transcribe, and translate the original writings.