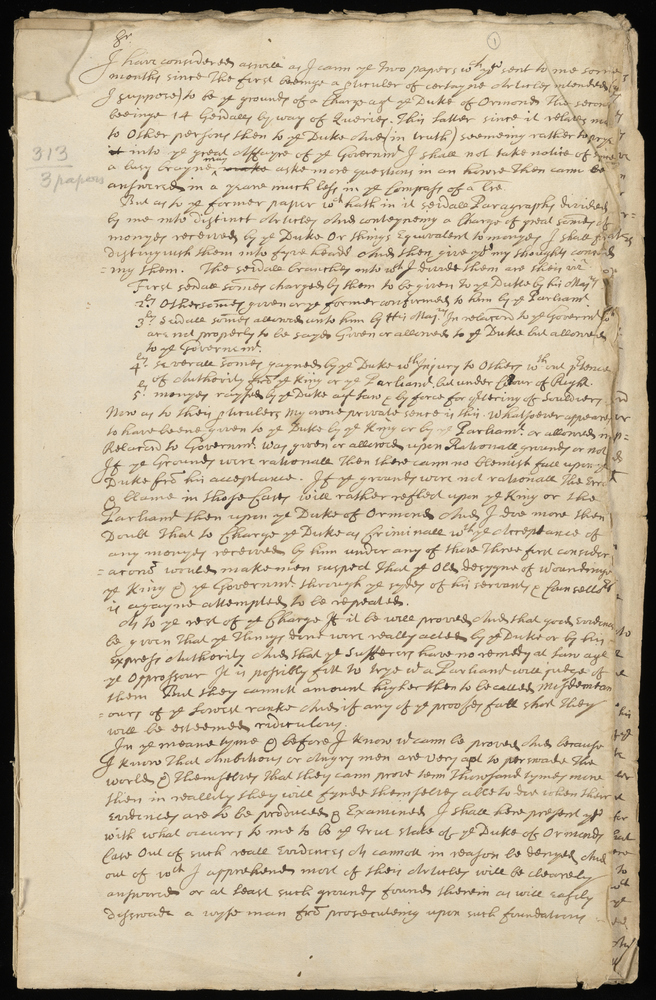 How much so can a historian rely on a source that is outright attempting to paint itself in the best possible light, even if it comes at the cost of the integrity of the author? The answer, in my eyes, is rather complicated. When dealing with a source like this, I really must cover my bases as much as humanly possible, argument; it helps to establish where the author is coming from in relation to their peers. This can, admittedly, be a rather tedious process I’ve found, but in ensures that I can have confidence that when I’m using a source, the information that I can get from it is valid and, well, usable!

The following set of excerpts are from a set of notes on a biography of James Butler, the Duke of Ormond, written in the late 1680s in England by Sir Robert Southwell. They serve as a prime example of the sort of seemingly intentionally biased source that I’ve come across in my studies before. Now, to understand why this source would be one that I consider to likely be intentionally biased, it’s important to understand a bit about the time period that Southwell was writing in: The Restoration. The Restoration of the Stuart Monarchy in 1660 marked the end of roughly twenty years of civil war and Cromwellian dictatorship in England. It saw a king executed, a dynasty deposed, and two islands devastated by a conflict marked with religious fanaticism, a hallmark of the Thirty Years War on the continent.[1] In the war’s aftermath, and of the subsequent military dictatorship under Oliver Cromwell, the Stuarts were restored to a  throne which had been battered to the core by the execution of Charles I. With the return of the Stuarts came also the return of many royalists who had fled with Charles II into exile. The return of said exiles brought with it the debate over what exactly happened to cause a royalist defeat, particularly as it pertained to the revolt in Ireland.[2]  were not really about determining what happened as an honest practice,[3] but rather it was a way for royalists to slander each other and gain influence at court;[4] the general consensus was that the Irish were savages, that wasn’t what was being debated, but instead it was about assigning fault and shaping how future generations would perceive the conflict.[5] The notes left by Sir Robert Southwell, one of the biographers of James Butler, the Duke of Ormond showcase the lengths to which royalist supporters would go in order to vindicate their own actions during fighting, which amounted to essentially a mass-scale PR campaign.  As historians, we must be very careful with how much we trust the authors of their sources, as those doing the writing then, as well as now, have their own biases and societal pressures which tint the lenses through which they see the world around them.

← Introduction
On the Research: How I Approached the Document →
Overview