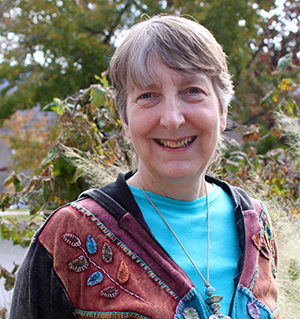 Carol J. Adams is the author of The Sexual Politics of Meat: A Feminist-Vegetarian Critical Theory. First published in 1990, the book has been translated into many languages, and will soon have editions in Spanish, Italian, Croatian, and French. Bloomsbury Publishing recognized the 25th anniversary of its publication by selecting it for the Bloomsbury Revelations "Series of Books that Change Consciousness."

The Sexual Politics of Meat explores a relationship between patriarchal values and meat-eating by interweaving the insights of feminism, vegetarianism, animal defense, and literary theory. The book describes how a process of objectification, fragmentation, and consumption enables the oppression of animals so they are rendered being-less through technology, language, and cultural representation. This cycle links butchering with both the representation and reality of sexual violence in Western cultures that have a tendency to normalize sexual consumption.

Adams is the author and editor of more than 20 other books, including The Bedside, Bathtub, and Armchair Guide to Jane Austen. She has written a pastoral care guide on woman-battering, books of prayers for animals, and most recently co-authored Never Too Late to Go Vegan: The Over-50 Guide to Adopting and Thriving on a Plant-Based Diet. She also co-edited the anthology, Ecofeminism: Feminist Intersections with Other Animals and the Earth.

Adams graduated from the University of Rochester in 1972 with degrees in English and history. While an undergraduate, she advocated for the first women's studies classes that were taught at the University, and was one of the organizers of the 1971 feminist protest of the all-male Boars Head dinner that restricted women to the role of playing barmaid. She received a Master of Divinity degree from Yale University in 1976.

For a decade after graduation, Adams served as the director of the Chautauqua County (NY) Rural Ministry, a not-for-profit organization that works with resettled migrant workers and other dislocated and at-risk individuals. Since 1987, she has lived in Dallas, Texas with her spouse, the Rev. Bruce A. Buchanan.