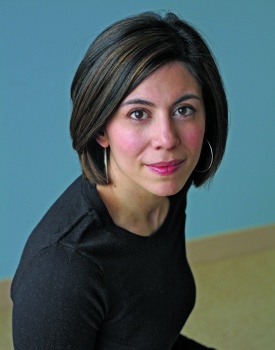 Cristina Henríquez is the author of Come Together, Fall Apart: A Novella and Stories, The World in Half, and most recently, The Book of Unknown Americans—a dazzling page-turner about a family’s hopes for its new life in America.

The hardships and legal battles of immigration are in the headlines every day, yet the nitty-gritty, humor, and heart behind them have rarely been brought to the page. In writing The Book of Unknown Americans, Henríquez was inspired by her father’s Panamà-to-U.S. immigration story and other experiences of real people in Delaware, where she grew up. The novel has been called “a flawlessly written book about immigration.” It is one of the New York Times’ Notable Books of 2014 and made it onto many other Best of 2014 book lists, including those of the Washington Post and NPR.

Henríquez grew up half-American, half-Panamanian. In her lectures, she speaks about identity and addresses common narratives about immigration. A gifted writer with a great talent for creating intimate and authentic character portraits, Henríquez also speaks to aspiring writers about the writer’s creative and technical process. Her work has appeared in the New Yorker and the Wall Street Journal, and she has been a guest on National Public Radio. She earned her M.F.A. from the Iowa Writers’ Workshop and currently teaches at Northwestern University.

Henríquez will be a guest on WXXI's Connections with Evan Dawson on November 17 at 12 p.m.