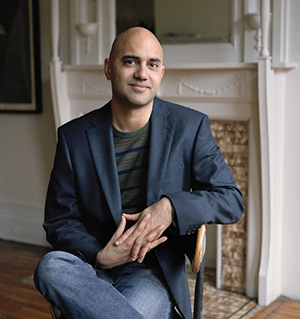 Ayad Akhtar is the author of the critically acclaimed, poignant, coming-of-age novel, American Dervish. Since its debut, the book has been embraced around the world for the richness of its characters and illuminating the everyday lives of Muslim Americans, earning Akhtar a rightful place alongside today's most compelling storytellers.

In all of his writing, Akhtar attempts to open a window on the vibrant and complex reality of the Muslim American experience. In American Dervish, he has blown the door open on this world, demonstrating a deft understanding of faith and our complex relationship with it and of pubescent love and caprice.

The novel centers on one family's struggle to identify both as Muslim and American, one boy's devotion to his faith, and the sometimes tragic implications of extremism. As an American-born, first-generation Pakistani-American, Akhtar wanted to recount the rarely told coming-of-age story of a Muslim-American boy. The Shah family copes with faith and belonging in pre-9/11 suburbia, and through them the reader understands the struggles, challenges, value, and cost of being Muslim in America.

Published in 25 languages worldwide, American Dervish was voted a 2012 Best Book of the Year at Kirkus Reviews, Toronto's Globe and Mail, Shelf-Awareness, and O (Oprah) Magazine.

Akhtar is also a Pulitzer Prize-winning playwright and screenwriter. His stage play Disgraced won the 2013 Pulitzer Prize for Drama as well as the Jeff Equity Award for Best New Play in 2012. Disgraced is the story of a successful Pakistani-American lawyer whose dinner party spins out of control amid a heated discussion of identity and religion.

As a screenwriter, he was nominated for an Independent Spirit Award for Best Screenplay for The War Within. He has received commissions from Lincoln Center and the Oregon Shakespeare Festival.

Akhtar was born in New York City and raised in Milwaukee, Wisconsin. He is a graduate of Brown and Columbia Universities with degrees in Theater and Film Directing. He was briefly enrolled at the University of Rochester, where his talent for creative writing was recognized in a fiction class. Since the 1990s he has been a resident of New York City, where he has taught acting on his own and alongside Andre Gregory (My Dinner with Andre, Vanya on 42nd Street).

Akhtar was introduced by one of his former Rochester instructors, Dr. Th. Emil Homerin, professor of religion and chair of the Department of Religion and Classics.