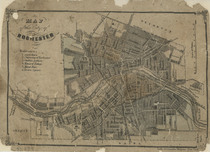 Azariah Boody offered a portion of his farmland for the campus of the Barleywood Female University if that school could raise the funds needed to construct a building valued at $16,000 on the site by June 1853. Barleywood failed in the effort and, sadly, closed entirely soon after it was established.

Boody then gave the University those 8 acres, and the Board of Trustees voted to purchase 17 more at $1000 per acre. Anderson Hall would open in 1861.

Believed to date from 1855, this map’s legend puts the University of Rochester on Boody Avenue, later to become Prince Street. 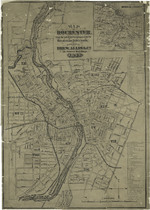 By 1872, the University was well established on Prince Street. Planning had begun for Sibley Hall, and this map shows the outline of the new building, which would be dedicated in 1876. 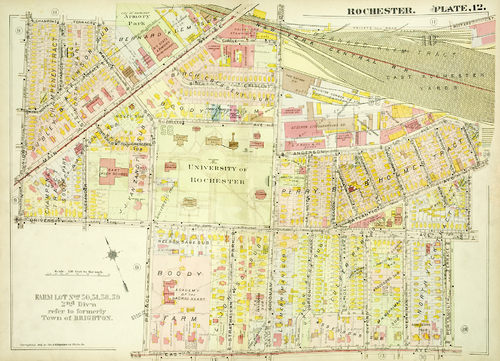 The University’s campus in 1918 shows some room to grow, but also shows the limitations of the space we chose in 1853.

Beyond the area bounded by College Avenue, Prince Street, University Avenue, and Goodman Street are homes, factories, and schools.

The extreme detail of this map shows the size of properties, the outlines of buildings, and even the construction material used: solid pink indicates brick, yellow is wood frame, etc.

Anderson Hall opened in 1861, and would house classrooms, the president's office, the library, and the natural history museum until 1877 when Sibley Hall was dedicated. 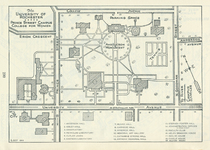 This map was included in the Bulletin which all students received. Between 1861 and 1955, the campus added buildings slowly at first and then more rapidly after 1906.

With the exception of Cutler Union and the Memorial Art Gallery, the University sold the buildings after the College for Women merged with the College for Men on the River Campus in 1955.

← On West Main Street
Beside the Genesee →
Prince Street