The Schiff Photographs of the River Campus

In 1930, Josef Schiff made a portfolio of photographs of the new campus that have been featured in the University's publications since their creation.

Schiff was a viola player in the Rochester Philharmonic Orchestra, but is best remembered for his photographic expertise. Nationally noted for his portraits of fellow musicians Alec Wilder and Jose Iturbi, one of his studio assistants was Lou Ouzer, who helped make these images of the new campus. Ouzer's own career as a photographer is legendary, and his photographic legacy is held by the Eastman School of Music.

The views in these images show a campus untouched, and in the case of Fauver Stadium, incomplete. Absent from the landscape are the people who would soon bring the campus to life. 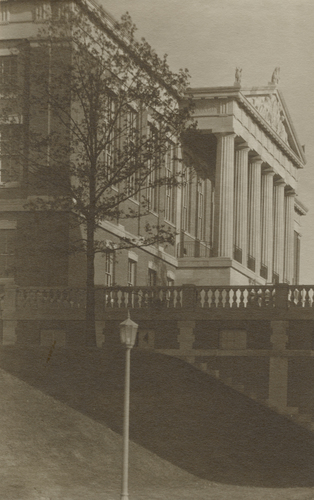 Against the sincere protest of President Rhees himself, the Board of Trustees voted to give his name to the new Library.  It was thought, "the dominant architectural and structural feature of the new campus should be honored with the name of the dominant personality behind the entire development." 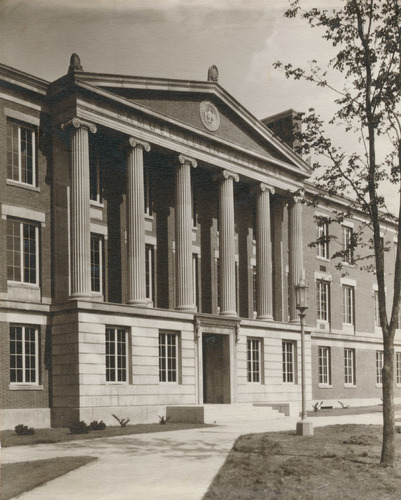 Samuel A. Lattimore [1828-1913] was a Professor of chemistry at the University for 41 years.  He also served as acting President between the administrations of Martin B. Anderson and David Jayne Hill [1896-98].  The Chemistry laboratories were located in Lattimore Hall until their removal to Hutchison Hall in 1972. 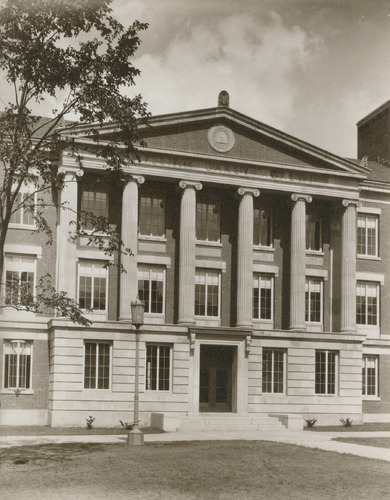 William Carey Morey [1843-1925] was a member of the Class of 1868.  He entered the UR in 1862, and returned to get his degree after serving in the Civil War as brevet major and lieutenant colonel of the cavalry.  He taught a variety of subjects, mainly history and political science.  He was beloved by his students who fondly called him "Uncle Bill." 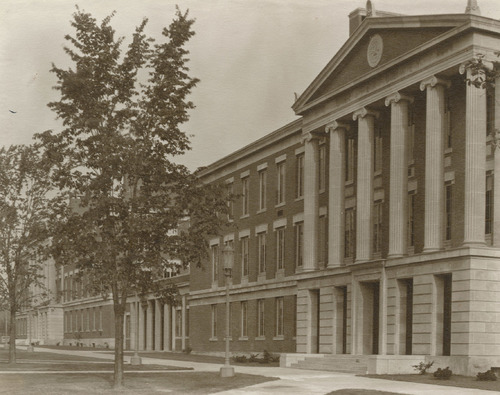 Professor Chester Dewey [1784-1867] was among the original faculty when the University was founded in 1850.  He was a distinguished scientist and "veteran educator."  He kept detailed records of Rochester’s weather for thirty years [1837-1867] that can be seen in the Department of Rare Books and Special Collections. 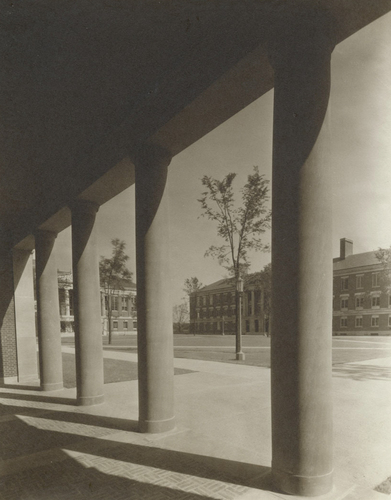 This building was a gift of the families of the founders of Bausch and Lomb Optical Company, John J. Bausch and Henry Lomb.  The families gave $300,000 to the University during the Greater University Campaign, specifying that the money be used to build a physics laboratory building.

Schiff did not make a portrait of the building's facade, but it can be glimpsed through the colonnade, along with Rush Rhees Library. 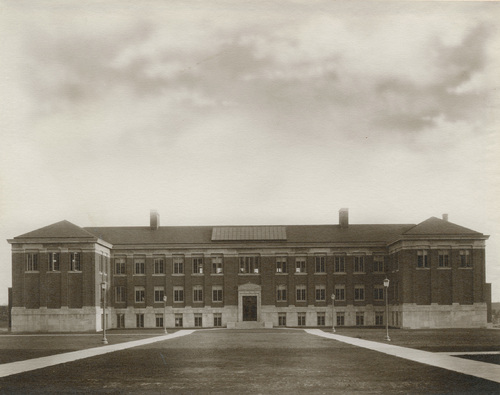 The Engineering Building was named Gavett Hall in 1951 in honor of Professor Joseph W. Gavett, Jr. [1889-1942] who headed the Department of Engineering for 21 years.  Under his direction the engineering department expanded to a major division. 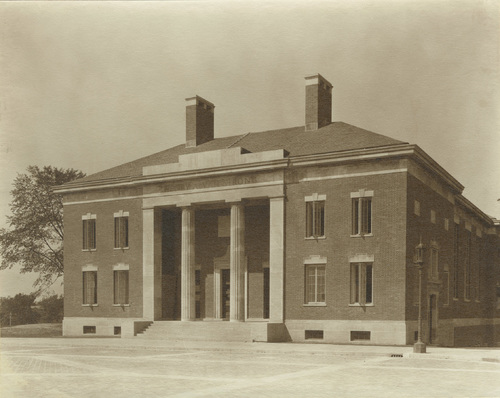 (Images of the interior of Upper Strong Auditorium) 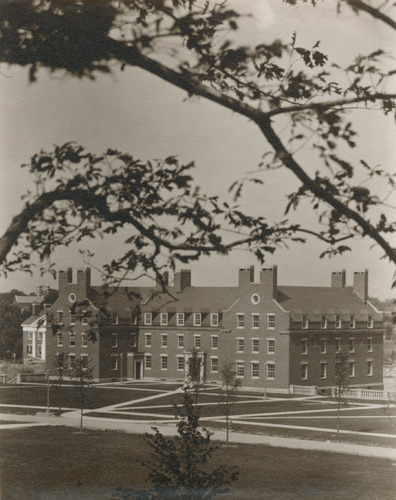 Named for Henry F. Burton [1851-1918], Professor of Latin, who also taught Sanskrit.  He was a bulwark to the University acting as President for two years, 1898-1900 and was recommended for president, but disliked "executive duties and responsibilities." The dormitory was a twin to Crosby Hall, the original dormitories on the River Campus.

George Nelson Crosby [1840-1923] of Rochester, who founded a large tanning-furrier business, bequeathed his entire residuary estate to educational institutions in Rochester.  Upon his death his estate was to be left to his wife with the understanding that when she died the remainder of the estate would be divided between the University and RIT.  Mrs. Crosby died in 1925 while the fundraising for the River Campus was underway.  The Crosby bequest went towards this end and when the campus opened in 1930 one of the new dormitories was named after George Nelson Crosby. 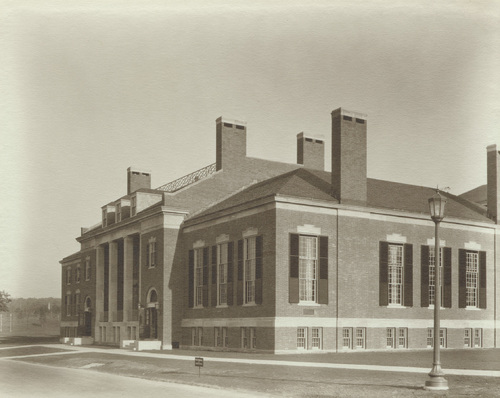 George W. Todd [1860-1938] Rochester businessman is credited with suggesting the Oak Hill site, now the River Campus, as the most propitious location as the new home of the College for Men.  He also helped to raise the necessary funds to do so.  Although a great friend to the University he was not formally connected to it.  He, and his brother Libanus, founded the Todd Protectograph Company.

(Images of the formal and informal dining areas, lounge, and game room) 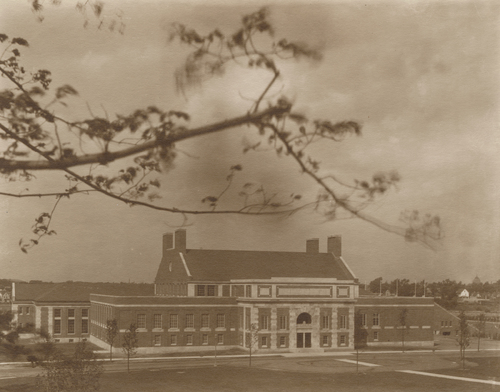 In recognition of the contributions of the University’s alumni to the University, the gymnasium on Prince Street, built 1899-1900, was originally called the Alumni Gymnasium.  When the River Campus was built the name was transferred to the new building.  The Alexander Palestra is part of this structure.  The Palestra was named for Louis Albion Alexander (1899-1976), who served as director of the University’s Athletics program from 1939 until 1966, in 1968. 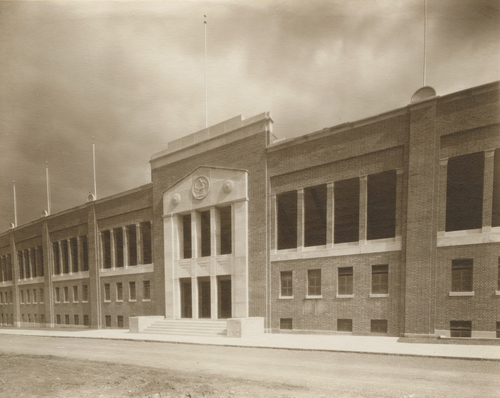 Named in 1951 for Dr. Edwin Fauver [1875-1949] for 29 years associated with athletics at the University as professor of hygiene and physical education, college physician, coach and athletic director.  Known as a "champion of clean, wholesome college sports," Dr. Fauver spent almost two years visiting the athletic facilities at other colleges and consulting with experts in designing the new physical education plant at Rochester.