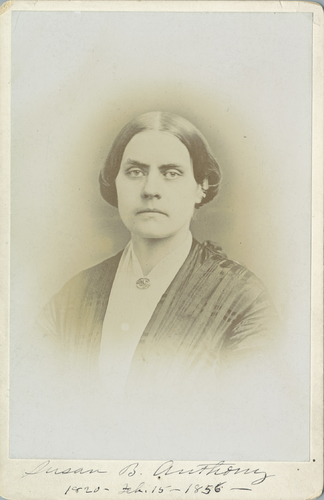 Portrait of Susan B. Anthony at age 36.

1861: SBA conducts a "No Compromise with Slaveholders" tour of upstate NY.
1862: With Stanton, organizes National Woman's Loyal League, Anthony's father dies.
1866: SBA's mother and sister Mary Anthony move into the house on Madison Street.
1866: SBA helps found the American Equal Rights Assn. to advocate for Universal Suffrage.
1867: SBA presents petitions for women's suffrage to the NYS Constitutional Convention
1867: SBA canvasses Kansas with Stanton and George Francis Train on behalf of a woman suffrage referendum.
1868: Establishes The Revolution with Stanton and the financial backing of Train.
1868: SBA attends National Labor Union Association as a delegate of the Working Women's Association.
1868: Woman's Suffrage movement splits over the 14th amendment and tactics.
1869: With Stanton, SBA establishes National Woman Suffrage Association.
1870: SBA and Stanton sell The Revolution and lectures on the Lyceum circuit to pay off the newspaper's 10,000 dollar debt. 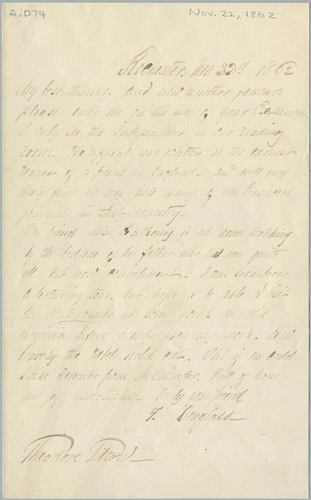 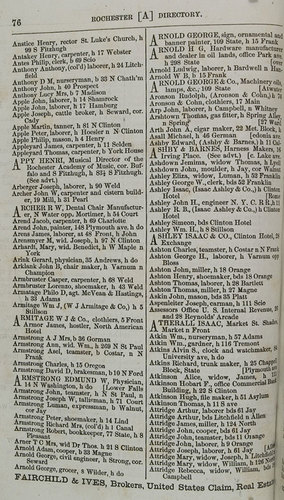 On November 22, 1862 Frederick Douglass writes to his fellow abolitionist Theodore Tilton that "Our friend Miss Anthony is at home watching by the bedside of her father who has been quite ill--but now convalescent." Douglass’s optimistic prognosis proved wrong; Daniel Anthony died three days later. 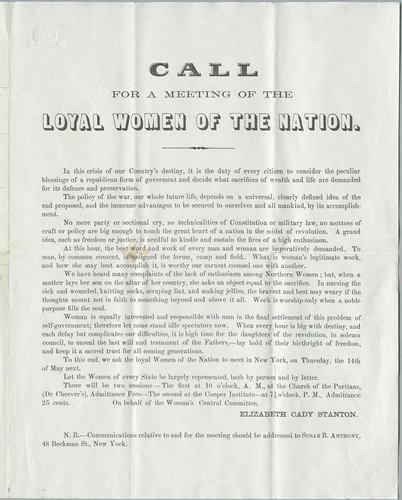 Call for meeting of the Women’s National Loyal League, 1863. Letter from Susan B. Anthony to Amy Post, April 13, 1863 written on the second leaf of the "Call".

During the Civil War the leaders of the woman's movement suspended agitation on behalf of their own rights in order to concentrate on the abolition of slavery. On May 14, 1863, Susan B. Anthony and Elizabeth Cady Stanton called a meeting of the Women's National Loyal League. The League called for the immediate abolition of slavery: "...when a mother lays her son on the altar of her country, she ask an object equal of the sacrifice." 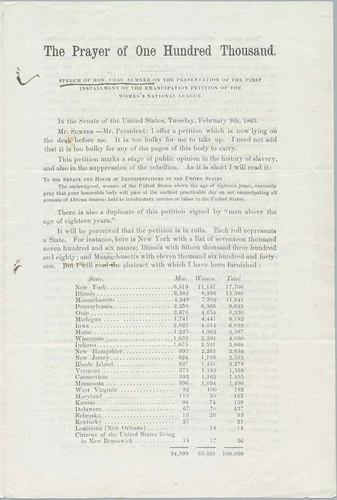 Prayer of One Hundred Thousand: speech of Hon. Chas. Sumner on the presentation of the first installment of the emancipation petition of the Women's National League.

The Women’s Loyal National League gathered 100,000 signatures on petitions of women and men who "earnestly pray that your honorable body will pass at the earliest practicable day an act emancipating all persons of African descent held to involuntary service or labor in the United States."

In this speech, published by the League, Senator Charles Sumner acknowledges the receipt of the petitions. Published with Sumner’s remarks is Susan B. Anthony’s exhortation to women to continue the petition work. 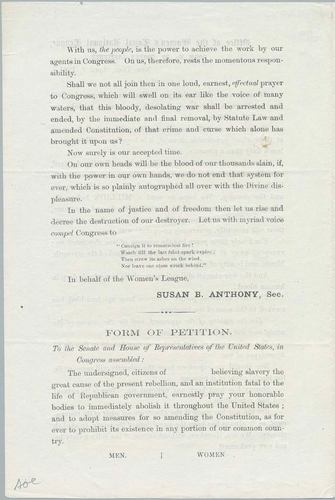 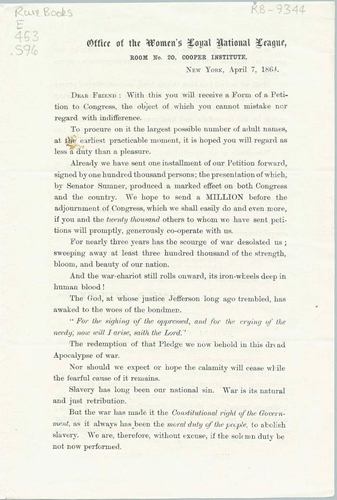 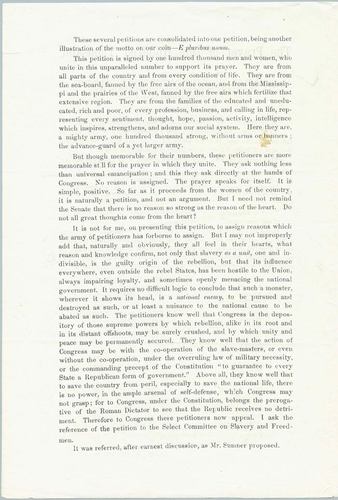 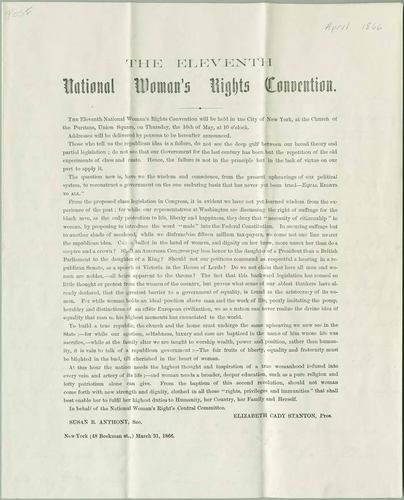 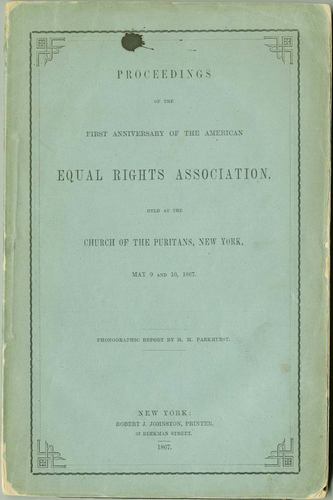 Proceedings of the first anniversary of the American Equal Rights Association. 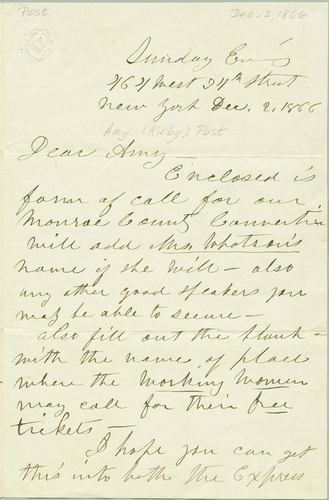 Letter from Susan B. Anthony to Amy Post enclosing a press release announcing a meeting in Rochester on December 11, 1866 to discuss adding a universal suffrage amendment to the New York state constitution. 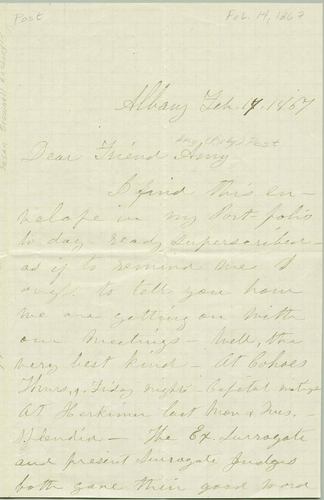 A New York State Constitutional Convention was held in June 1867. During the last months of 1866 and the beginning of 1867, Anthony and Stanton organized a series of meetings throughout the state "to adopt measures to engraft the principle of universal suffrage upon the constitution of the state." In this letter to Amy Post Anthony enclosed a press release announcing the meeting to be held in Rochester on December 11, 1866. Speakers were to include Stanton, Lucy Stone, Charles Lenox Remond, and Frederick Douglass. Notice that workingwomen were offered free tickets. 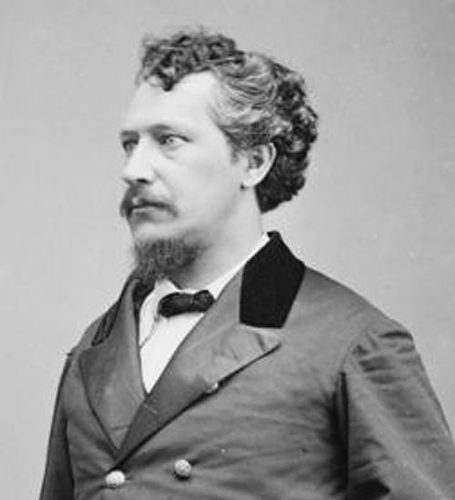 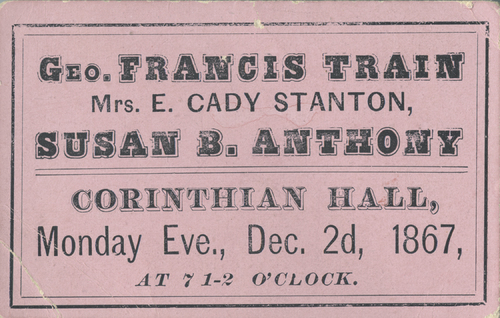 Ticket to lecture by Anthony, Stanton, and Train at Corinthian Hall, Rochester.

Stanton and Anthony traveled throughout Kansas on behalf of the woman suffrage amendment. When their old allies in the abolitionist movement and the Republican Party offered no financial support, they accepted the help of George Francis Train, a wealthy, flamboyant, eccentric Democrat who many abolitionists and suffragists considered a "raving lunatic" for his racist views. After the referendum was defeated in Kansas, Train sponsored a lecture tour by Stanton, Anthony, and himself. This is a ticket for their appearance at Corinthian Hall in Rochester on December 2, 1867. 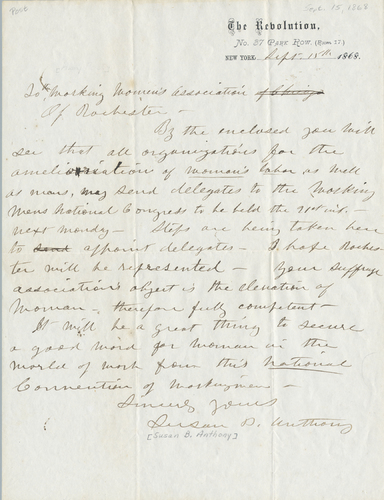 Letter from Susan B. Anthony to the Working Women's Association of Rochester, 1868. 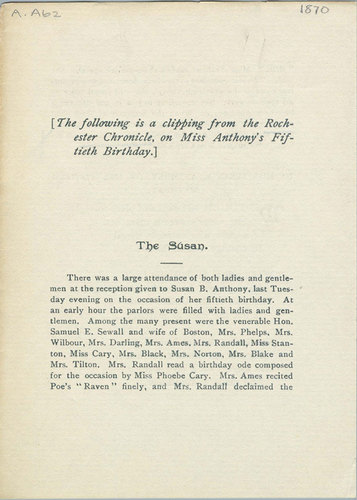 On February 15, 1870 a large gathering of Susan B. Anthony’s friends and supporters met in New York City to celebrate her fiftieth birthday.

This poem, written by Phoebe Cary for the occasion, was published in Rochester as a keepsake. 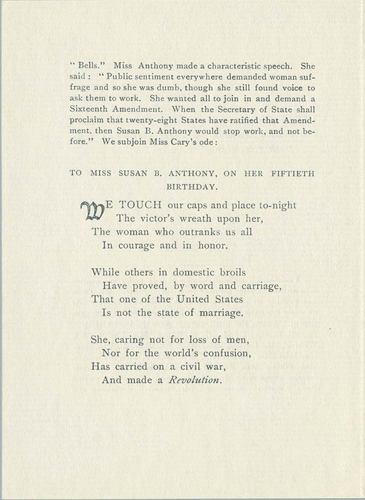 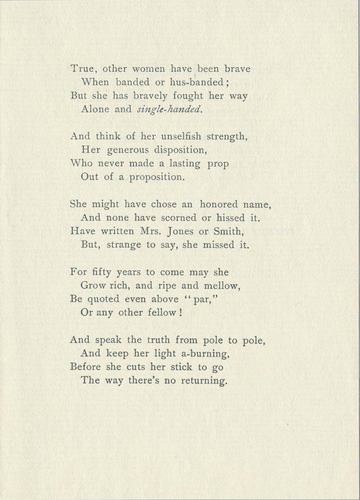 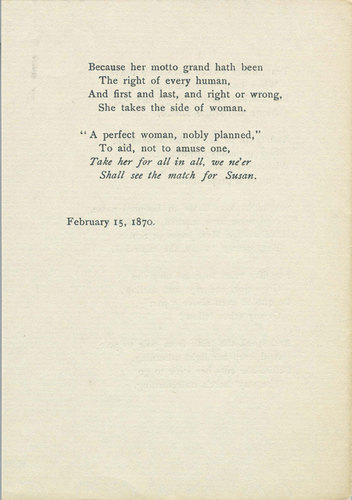 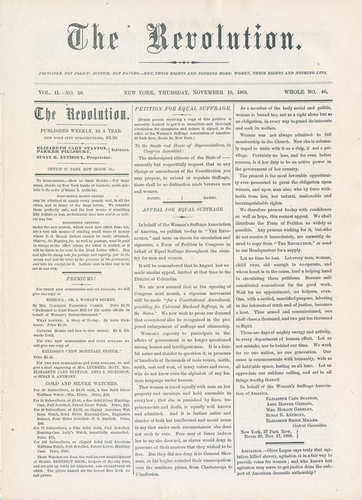 At a contentious annual convention of the American Equal Rights Association in May 1869, it became clear that this organization would not support women’s political rights. The day after the AERA meeting ended, Stanton, Anthony, Lucretia Mott, Ernestine Rose, Matilda Joslyn Gage, Martha C. Wright and women from nineteen states met to form the National Woman Suffrage Association; an organization dedicated to adding an amendment to the federal Constitution that would give women the vote. A year later the story of the NWSA's origins was published in the May 26, 1870 issue of The Revolution.

Lucy Stone, her husband Henry Blackwell, Julia Ward Howe and other New England Republicans were outraged by Anthony and Stanton’s opposition to the Fifteenth Amendment, their association with George Francis Train, and their interest in divorce and labor issues.