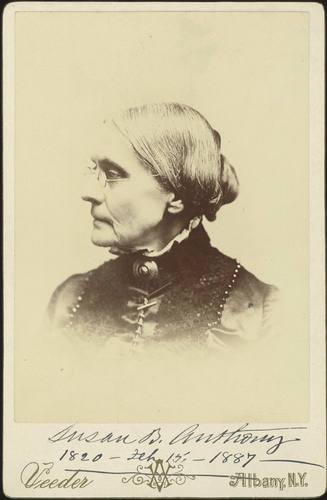 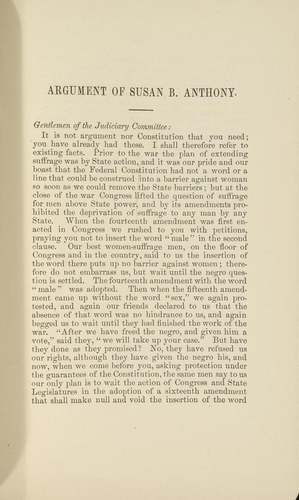 Memorial of Elizabeth Cady Stanton, Isabella Beecher Hooker, Elizabeth L. Bladen, Olympia Brown, Susan B. Anthony, and Josephine L. Griffing, to the Congress of the United States, and the arguments thereon before the Judiciary Committee of the U.S. Senate.

In the early 1870s Francis and Virginia Minor formulated the "New Departure" strategy. It was based on the premise that the Fourteenth Amendment’s definition of U.S. citizenship included women and states were therefore barred from depriving them of the privileges of citizenship. They also argued that the Fifteenth Amendment’s reference to the "right of citizens of the United States to vote" included women. Susan B. Anthony, Elizabeth Cady Stanton and other suffragists enthusiastically embraced the "New Departure" and hoped to validate this interpretation of the amendments through an act of Congress or through a favorable decision in federal courts. 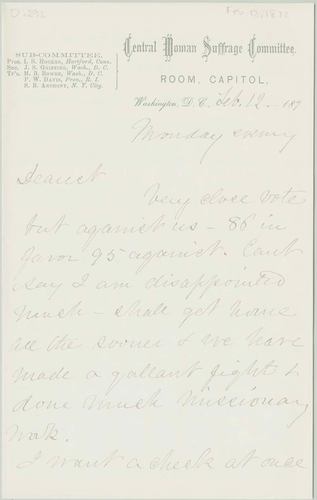 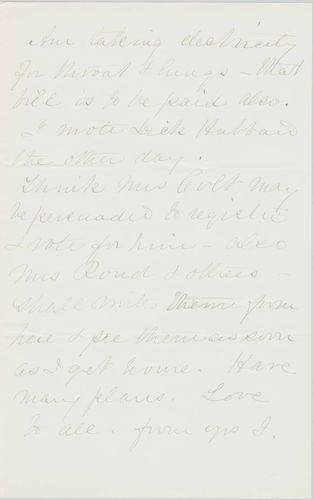 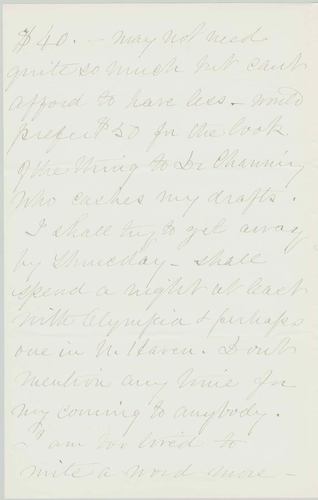 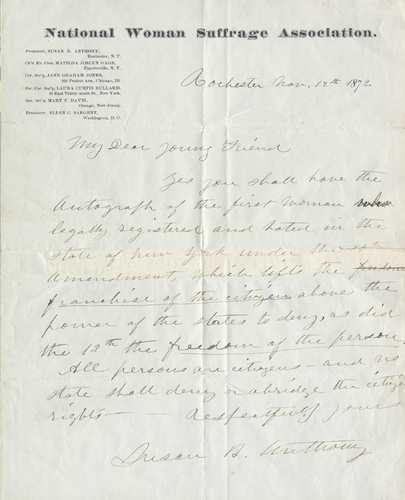 Letter from Susan B. Anthony to "My Dear Young Friend".

On November 1, 1872, Susan B. Anthony, her three sisters, and ten other Rochester women registered to vote after persuading the election inspectors that the Fourteenth Amendment gave them that right. 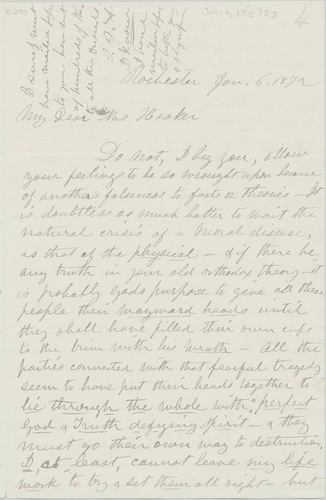 Letter from Susan B. Anthony to Isabella Beecher Hooker, January 6, 1873.

Susan B. Anthony writes this January 6, 1873 letter to Isabella Beecher Hooker at the height of the scandal that involved an alleged affair between Hooker’s brother, the eminent clergyman Henry Ward Beecher and his parishioner Elizabeth Tilton, the wife of Theodore Tilton. Because of their association with all the parties--including Victoria Woodhull who first accused Beecher of adultery--Anthony and Stanton became embroiled in the scandal, but here Anthony writes of her determination not to be diverted from her life’s work of "breaking the political chain that binds all women in subjection to men." She sees little profit to being swept into the developing scandal. "We might as well ‘bay the moon’ as essay to establish an equal moral code for woman." 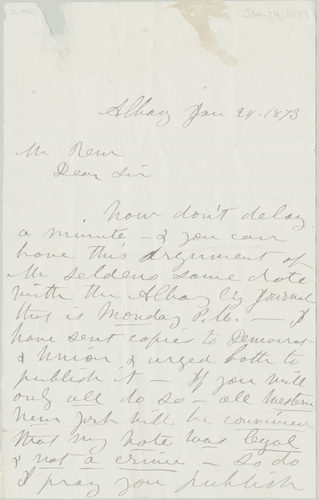 Letter from Susan B. Anthony to Francis S. Rew, publisher of the Rochester Evening Express, January 24, 1873. 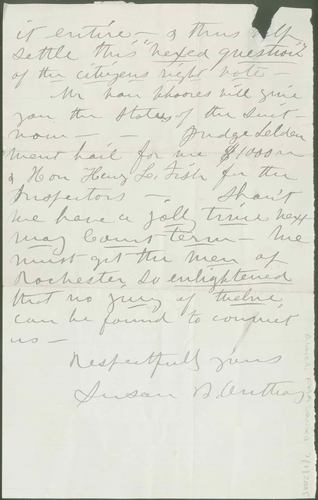 On January 21, 1873 Henry Selden, Susan B. Anthony’s defense lawyer, appeared before the U.S. District Court for the Northern District of New York in Albany to argue that Anthony should be discharged because she had a right to vote and because the government had not established criminal intent on her part. The judge did not release her and on January 24 she was indicted by a federal grand jury. Anthony was arraigned and Selden paid her bail. 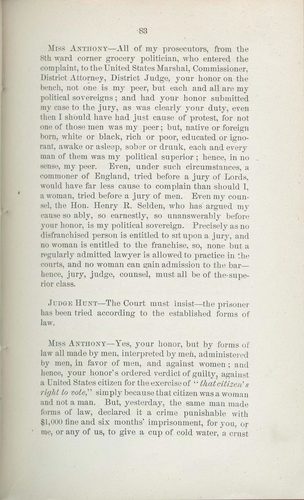 Account of the proceedings of the trial of Susan B. Anthony, on the charge of illegal voting, at the presidential election in Nov., 1872. 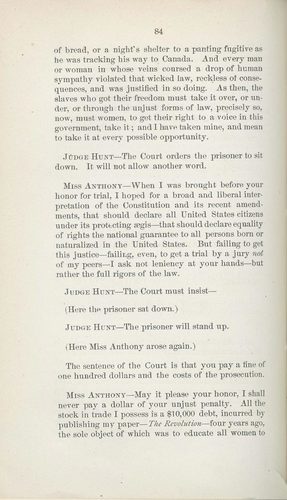 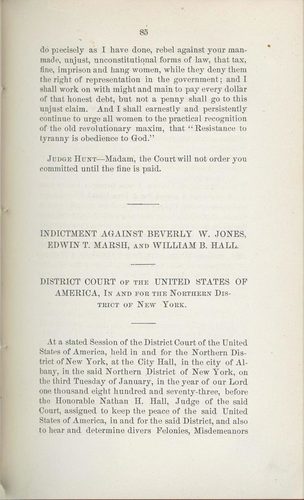 As part of Anthony’s plan to enlighten the men of Rochester so that no jury could be found to convict her, she spoke throughout Monroe County on why she had the right to vote under the Fourteenth Amendment. Her efforts were foiled when the prosecuting attorney, Richard Crowley, successfully petitioned to have the case heard before the U.S. Circuit Court in Canandaigua, Ontario County. The trial began on June 17, 1873 with Supreme Court Justice Ward Hunt presiding. At the end of two days of testimony and arguments, Judge Hunt declared that the right to vote was not among the "privileges and immunities" protected by the Fourteenth Amendment. He further stated that Anthony knew that New York enfranchised only males and she, therefore, knowingly violated the law. Hunt concluded that there was no question for the jury to decide and he directed them to return a verdict of guilty. Selden insisted the jury had a right to decide the guilt or innocence of Anthony, but Hunt refused his request to poll the jury. 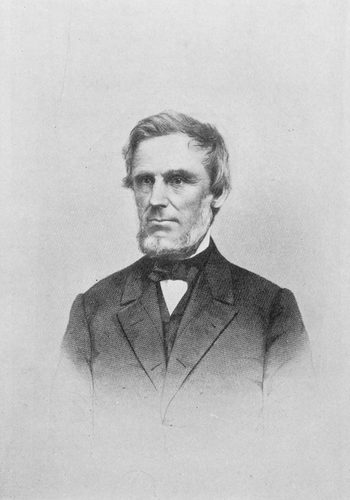 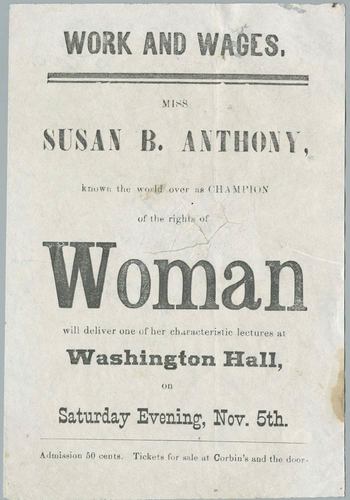 Broadsheet advertising a talk by Susan B. Anthony. 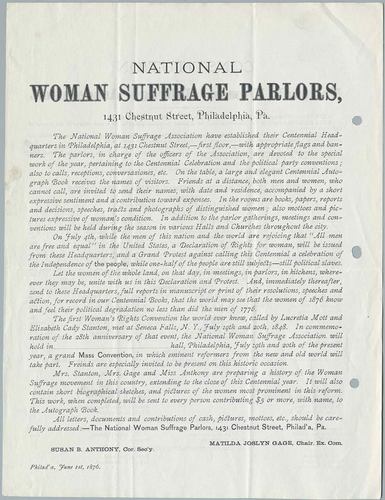 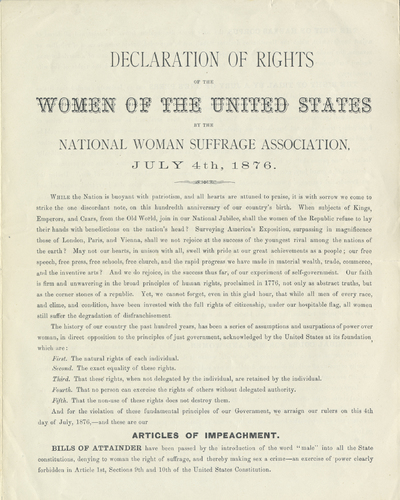 Declaration of Rights of the Women of the United States. 1876. 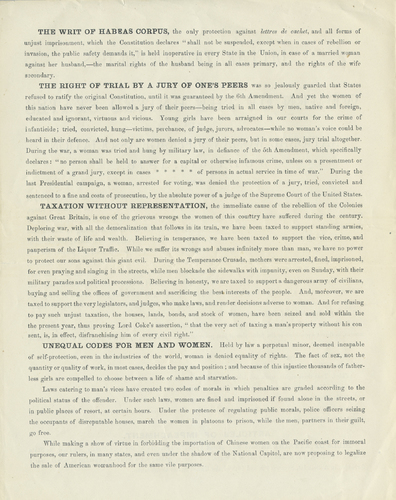 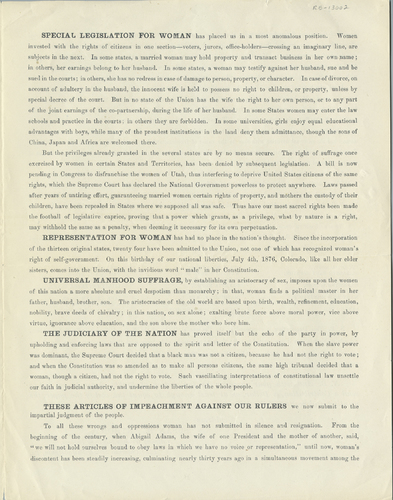 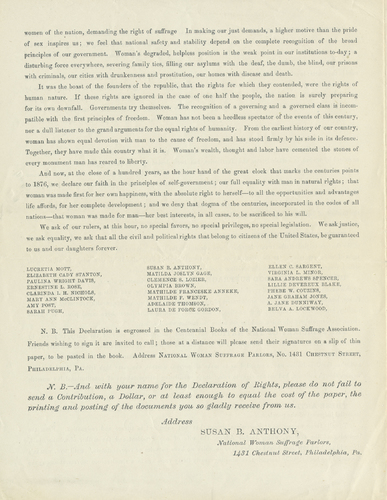 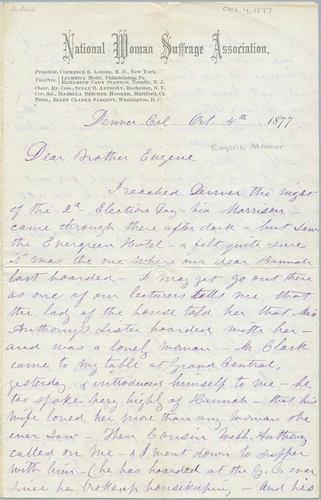 Letter from Susan B. Anthony to her brother-in-law, Eugene Mosher, October 4, 1877.

In 1877 Susan B. Anthony traveled to Colorado where a suffrage referendum was to appear on the ballot. The previous year her sister Hannah Anthony Mosher had gone to Colorado in hopes that the climate would improve her tuberculosis. The trip did not help and Hannah died on May 11, 1877 at their brother Daniel’s home in Leavenworth, Kansas. Four years earlier another sister, Guelma Anthony McLean, also succumbed to tuberculosis. 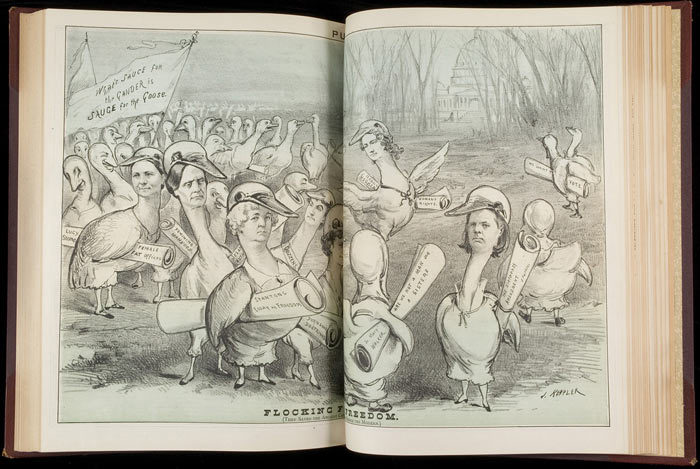 "Flocking for freedom," a political cartoon by Joseph Keppler published in Puck, 1878. 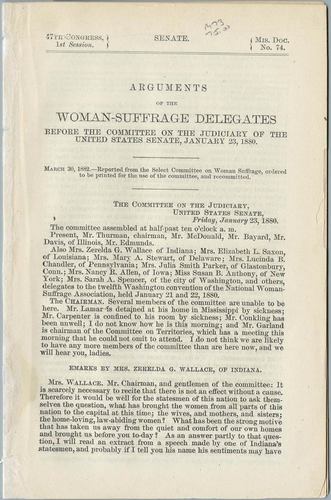 Arguments of the woman-suffrage delegates before the Committee on the Judiciary of the United States Senate, January 23, 1880.