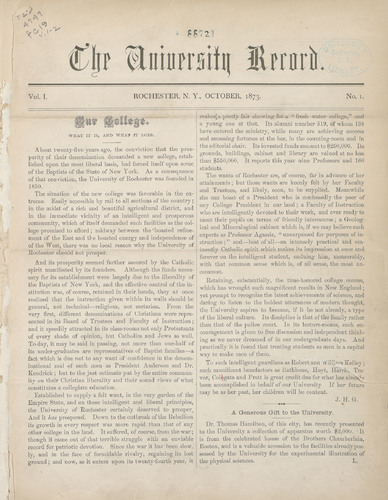 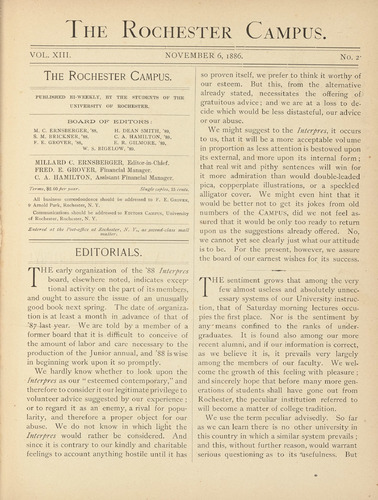 PRINT ALL THE NEWS THAT FITS

As the student enrollment grew, particularly after the Civil War, students began producing a regular newspaper. Initially issued monthly, it would wax and wane in its frequency, page count and content. In in its centennial year of 1973, it was issued daily. Rochester news about enrolled students, alumni, and faculty was presented in each issue, along with fiction, humor and -- by the 1880s and 1890s -- athletics. News from other colleges was also included, and provides today’s readers with a view of how Rochester’s students saw their place in American higher education.

The University Record and Rochester Campus are online. 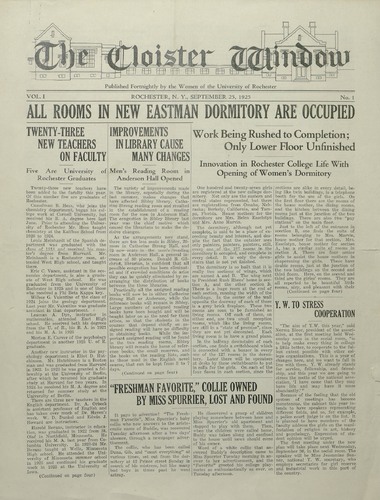 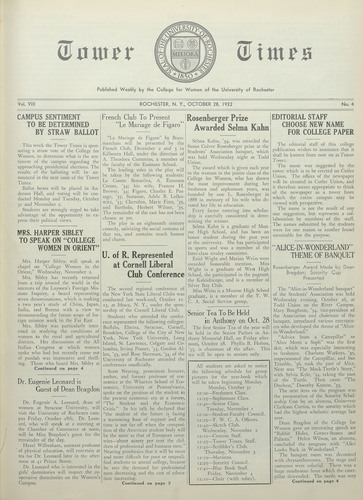 A NEWSPAPER OF OUR OWN

The students of the College for Women started their own newspaper in 1925. Many of the stories they covered overlapped with those written up in the Campus; others were unique to their student experiences. The Cloister Window carried news and events, a humor column, and an editorial column. It should not be confused with The Cloister, the women’s first literary magazine (shown elsewhere in this exhibition). The newspaper was renamed in 1932 as the Tower Times in honor of the tower on the newly-built Cutler Unon.

The Cloister Window and Tower Times are online. 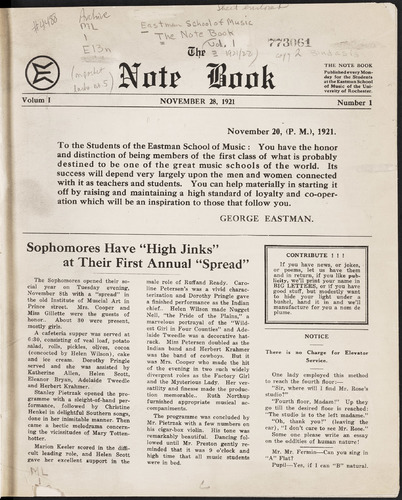 University of Rochester. The Senior Class of the Eastman School of Music. The Note book (November 28, 1921)

From 1921 to 1925, the students of the Eastman School of Music published their own newspaper which included school news, student events, notices of upcoming performances, and reviews of concerts in Rochester and beyond.

The Note Book is available online. 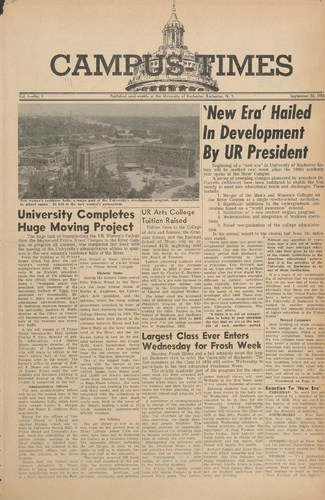 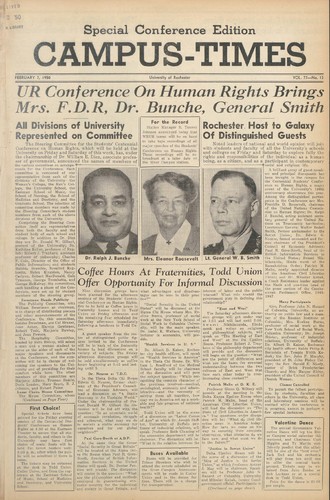 With the merger of the colleges for men and women in 1955, their newspapers merged as well, thus The Campus and Tower Times became Campus-Times (eventually losing the hyphen). But the name preceded 1955: this special issue highlighted the Human Rights Conference with keynote speakers Eleanor Roosevelt and Ralph Bunche.

The Campus Times is available online. 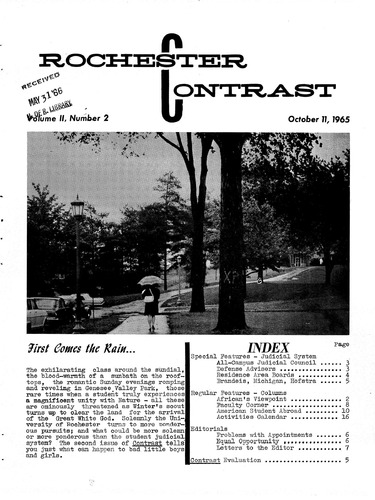 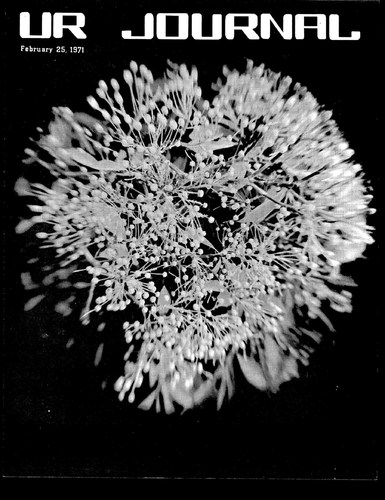 ROCHESTER CONTRAST, JOURNAL, AND UR JOURNAL

The purpose of the Rochester Contrast is revealed in its name—it was meant to serve as a contrast to the Campus Times. Contrast would evolve into Journal (and later, UR Journal). The articles often providing longer-form reviews and commentary on arts, theatre, and social issues at the University and in the community. 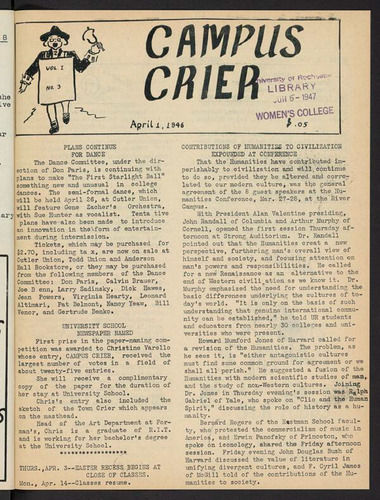 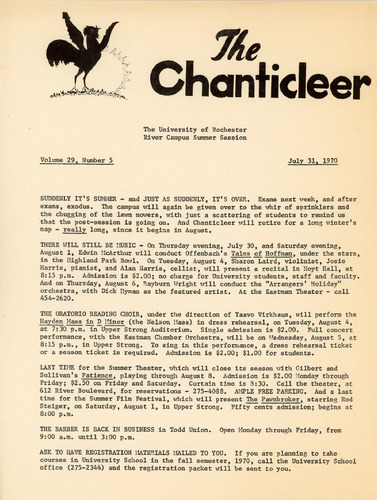 The Weekly Chanticleer was issued to serve students attending summer sessions. The Campus Crier represented the experiences of the part-time and evening students, and was published for a decade, from 1947-1958.

The Campus Crier is available online. 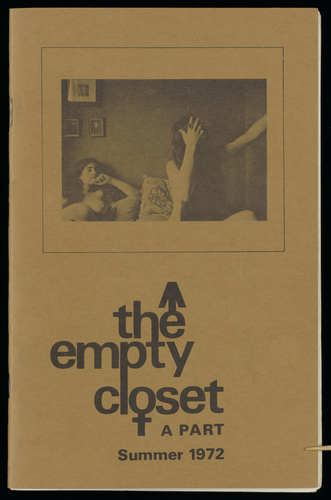 After a series of open meetings held in Todd Union during the fall of 1970, the University of Rochester chapter of the Gay Liberation Front published the first issue of the Empty Closet. Led by Bob Osborn ’74 (PhD) and Larry Fine ‘72, with a name suggested by R. J. Alcalá ‘71E, the publication focused on issues of discrimination, equal protection, and promoting campus and community events and businesses that welcomed gays.

The Empty Closet is available online. 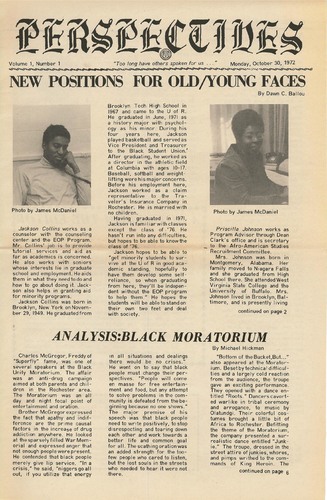 At the same time as the literary magazine Onyx was issued, the newspaper Perspectives appeared.

The two issues of Perspectives in the library's collection are available online. 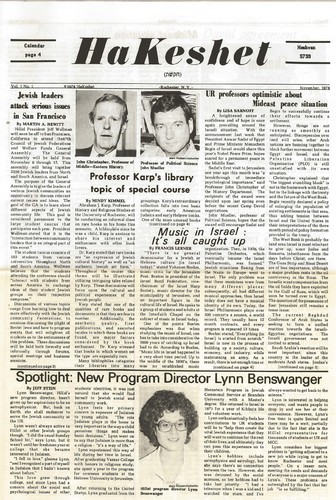 Ha Keshet was one of several publications created by Jewish students to provide news and information to the University community about Judaism, Israel, and world events. Other publications included Kesher: The Connection, The Perspective, and Israeli Weekly. 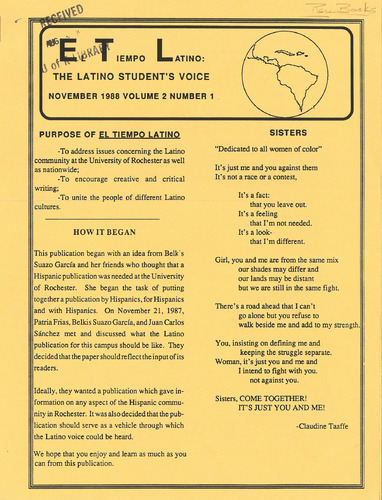 "To address issues concerning the Latino community at the University of Rochester as well as nationwide. To encourage creative and critical writing. To unite the people of different Latino cultures."

The library has only this single issue of El Tiempo and no other information about its history. 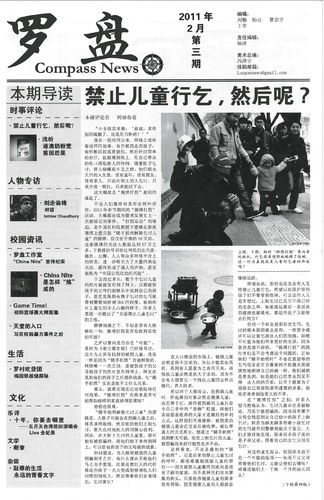 Compass News was first issued in November 2010, with "a purpose to share latest news around the world to the overseas Chinese-speaking students."