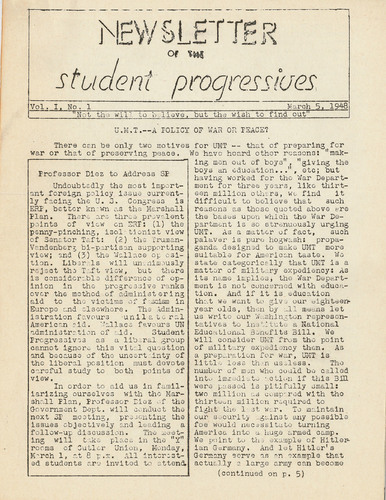 University of Rochester. Newsletter of the Student Progressives (March 5, 1948)

THE WISH TO FIND OUT

The Student Progressives were organized in January 1948, with representation from both the colleges for women and men. The group rallied for peace, resolving that “the paramount purpose of government today should be the promotion of friendship and cooperation among nations.” 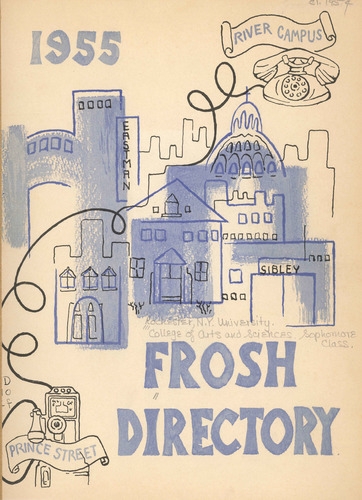 Before there was Facebook, there were Froshbooks. The earliest edition in the Archives was created in 1951 for the Class of 1955. The directory was created by the Sophomore class to welcome the first-years, and offered useful information about the campus. Each student picture was accompanied by information about where the student came from, where they lived on campus, nickname, and even their height and eye color. The student pictures were also used as quasi-student IDs: copies were used at the library’s circulation desk. 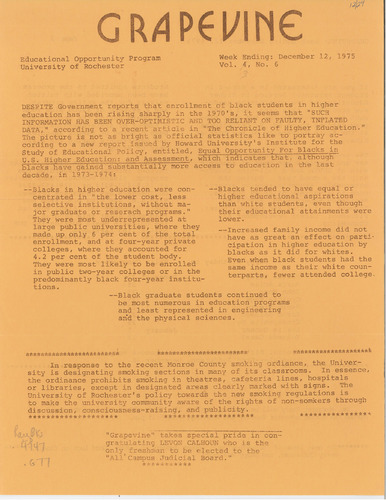 The earliest Grapevine appears to have been issued around 1973, under the auspices of the Equal Opportunity Program Office, a precursor to the Office of Minority Student Affairs. The contents were assembled largely by students and include reports on current national and world events, opinion pieces, book reviews, information about internships, student groups, and creative writing. 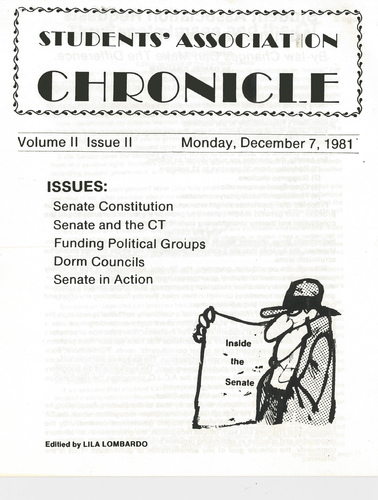 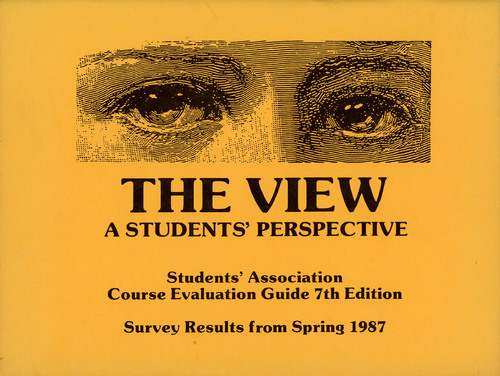 The Students’ Association Chronicle was created to keep students informed about the workings of their student government. SA also circulated and compiled a course evaluation survey, which was published as The View. 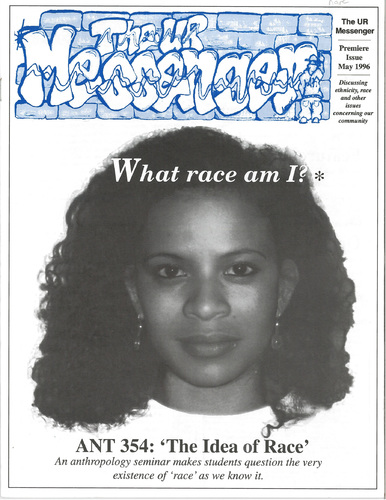 University of Rochester. Students’ Association. The UR Messenger (May, 1996)

MESSENGER IS THE MEDIUM

In its first year of publication, UR Messenger was awarded “Best Campus Alternative Publication of the Year” by the Center for Campus Organizing (Cambridge, MA).

In a University press release about the recognition, Curtis Sturdivant (Class of 1997) said, “This is what it’s all about. We worked hard to make a publication that would raise the consciousness on this campus and I’m glad people took notice.” Sturdivant’s efforts as the opinions editor were particularly praised by the judges as “an example of how persuasive and provocative this magazine is.” 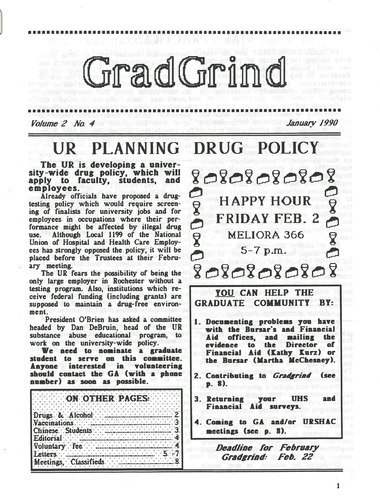 Taking its name from the “just the facts” schoolmaster in Charles Dickens’s Hard Times, Gradgrind provided a space to share information about the Rochester graduate student experience. 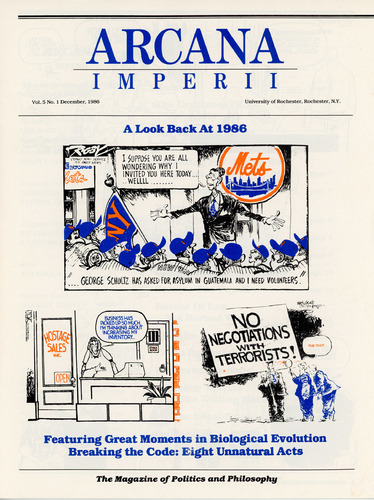 The Campus Times heralded the first issue of Arcana Imperii with the following, “This new journal fills a void which the CT cannot, allowing students and professors to express their ideas and opinions in great detail. This is very important in a university atmosphere, where people have come to be stimulated by the exchange of ideas.”

There was a hiccup in producing subsequent issues, but the journal’s staff persevered, and continued until December, 1986 with its final issue shown here. 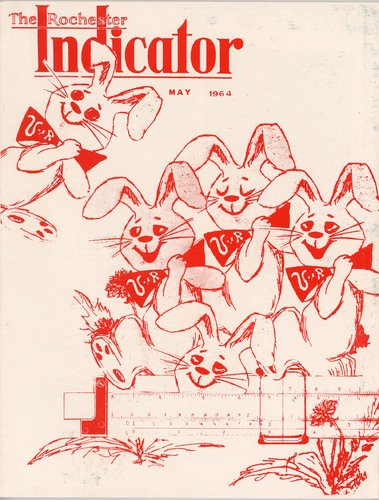 University of Rochester. Engineers’ Club. The Rochester Indicator (May, 1964)

USEFUL BY ANY MEASURE

Produced by the Engineering students, The Indicator and The Rochester Indicator presented student papers, news about faculty, puzzles, and featured advertisements from potential employers. It ran from 1933 to 1965. 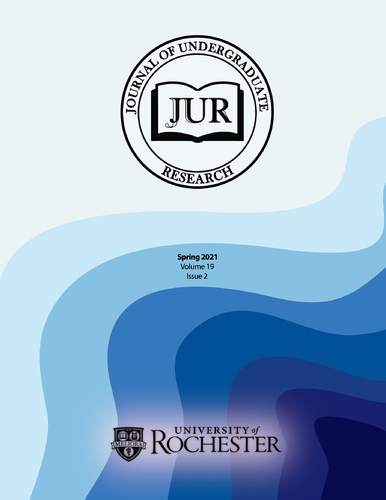 The Journal of Undergraduate Research began publication in 1976, and “is dedicated to providing the University of Rochester student body with intellectual perspectives from various academic disciplines. JUR serves as a forum for the presentation of original research, thereby encouraging the pursuit of significant scholarly endeavors. ” Issues from 2002 to the present are available online: https://www.jurrochester.com/issues.html 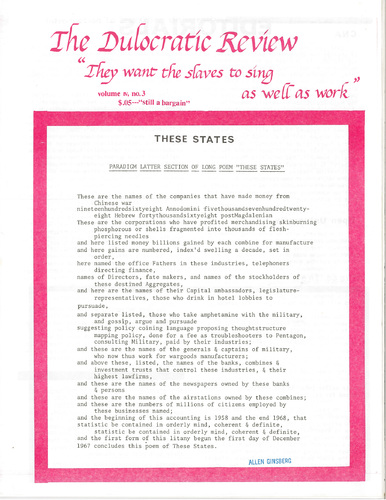 From the Greek word “doulos,” a dulocracy is a government run by servants or slaves.

Only one issue of the Dulocratic Review survives in the collection, although based on the volume number of the issue shown here, it appears to have been published for several years, perhaps even pre-dating the establishment of an SDS chapter at Rochester. Students for a Democratic Society (U.S.). 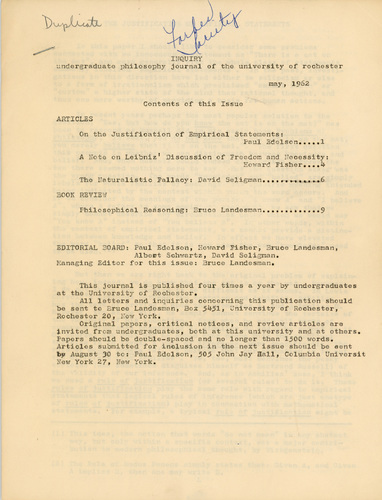 University of Rochester. Department of Philosophy. Inquiry. (May, 1962) 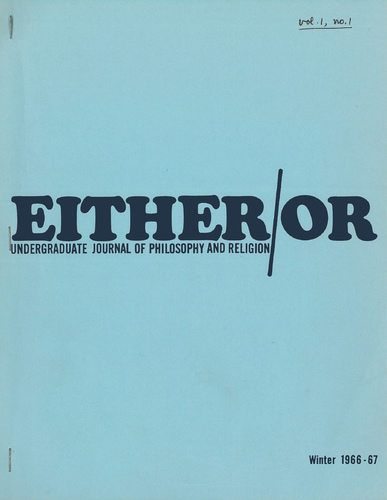 "Original papers, critical notices, and review articles are invited from undergraduates, both at this university and at others."

Inquiry, produced but the students in the Department of Philosophy, was praised in the Campus Times by Dr. Roy F. Holland, then at Rochester for a year as a Senior Fulbright fellow: "Inquiry is altogether a remarkable feat of enterprise and a matter of pride both for the undergraduates concerned and also for the faculty." I

Inquiry was succeeded by Either/Or. 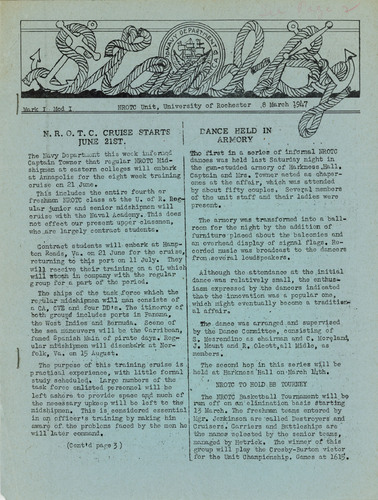 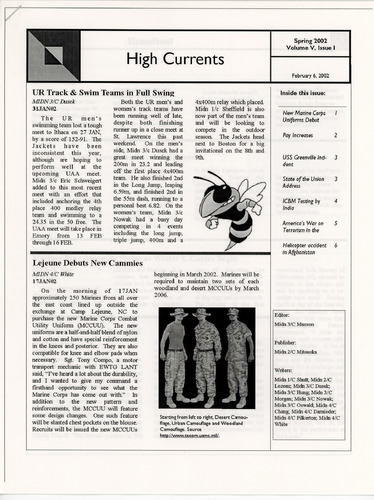 Members of the University’s Naval Reserve Officer’s Training Corps began issuing a newsletter almost immediately after the unit was established on the River Campus. In their inaugural issue, they noted that they believed Stand-By to be the "first newspaper to be published by any NROTC Unit...Both instructors and students may contribute tot its pages. Also, we will welcome any reasonably clean jokes under 200 years old, cartoons, poetry, etc. that you can dig up."

Stand-By would be followed by S-39, the Binnacle, and High Currents. 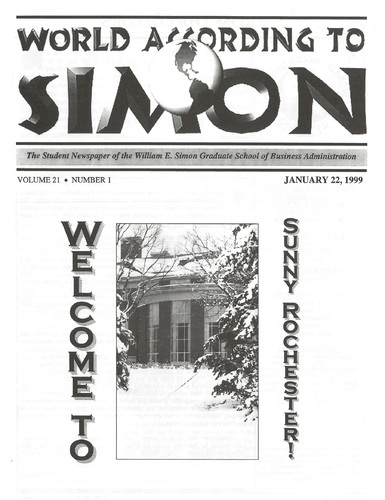 University of Rochester. World According to Simon (1999)

Richard Prati and Martin Hellwig established The World According to Simon (WATS) as a 4-page news source in 1992. Hellwig credited WATS as the springboard to his first big career step: becoming executive assistant to the school’s namesake, William E. Simon.

← Humor
Got Issues? Tell Us Your Story! →
Student Groups