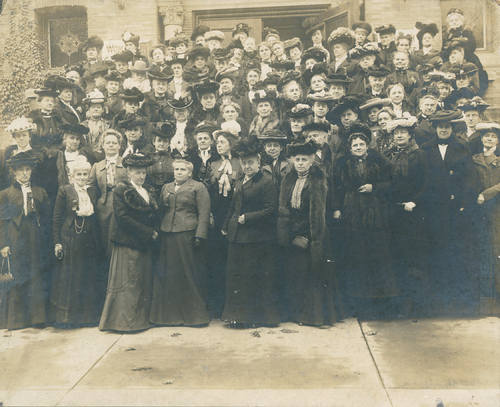 "A full report of the woman's rights agitation in the State of New York, would in a measure be the history of the movement. In this State, the preliminary battles in the anti-slavery, temperance, educational, and religious societies were fought; the first Governmental aid given to higher education of woman... Here the first Woman's Rights Convention was held, the first demand made for suffrage..."

Wilson's Days: The Life and Legacy of Joseph C. Wilson 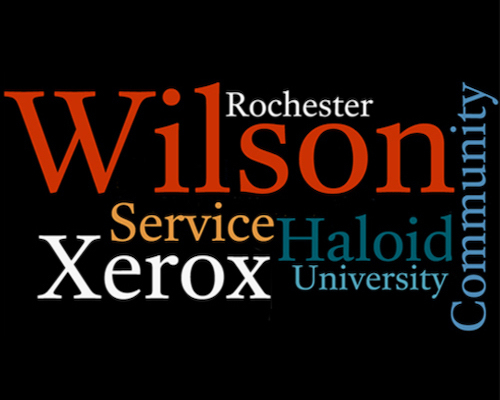 Meliora is the motto of the University of Rochester, and translates from the Latin as “ever better.” The form in Latin has an imperative quality—an exhortation to do better and to be better.

Perhaps no individual has embodied the concept of University of Rochester's motto of Meliora more fully than Joseph C. Wilson--alumnus of the class of 1931, Trustee, community leader, and business leader. 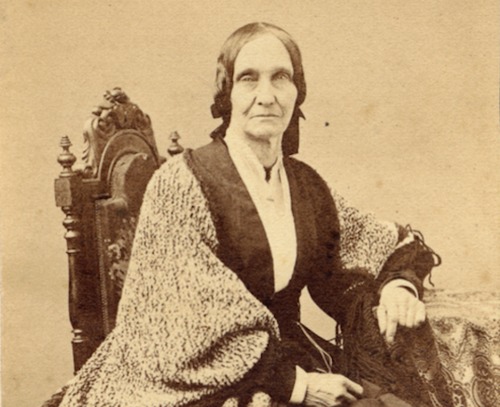 19th century Rochester was a boiling cauldron of civic activism. This agitation was epitomized by the members of the Post family. All the materials in their papers have been digitized, including letters from Frederick Douglass, Susan B. Anthony, Elizabeth Cady Stanton, and Harriet Tubman. 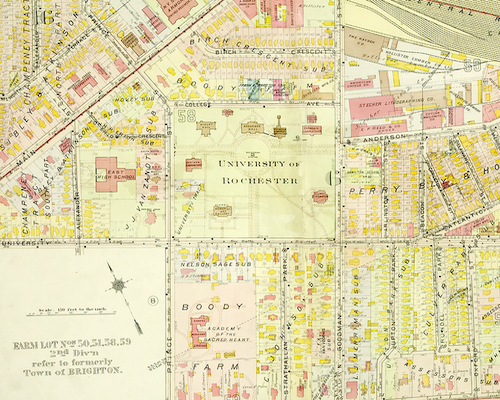 Our earliest map of Western New York—the gift of Dr. Seymour Schwartz—dates to 1724. As the University has grown and moved,  the manuscript and printed maps in our collections enable us to trace the topography, ownership, and use of the land our campuses occupy—from West Main Street to Prince Street to Wilson Boulevard. 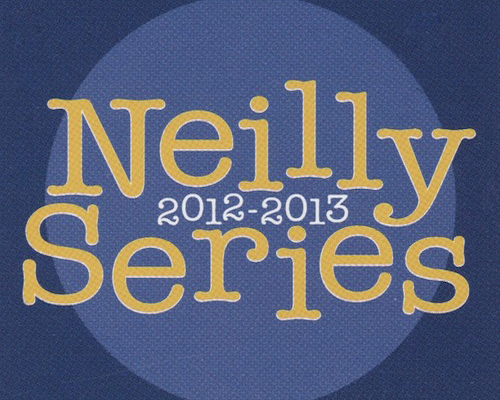 In 2001, the Neilly Series was established through an endowment gift of Life Trustee Andrew H. Neilly and his wife, Janet Dayton Neilly, to support library programs designed to contribute to the intellectual life of the University and to enhance the libraries' collections related to academic initiatives. 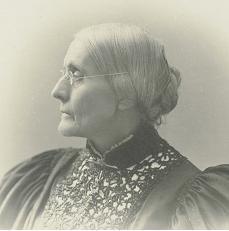 Susan B. Anthony died on March 13, 1906 having dedicated her life to winning for women their political, civil, economic and educational rights. At Anthony's funeral her close friend and ally in the suffrage movement, Anna Howard Shaw, said of Susan B. Anthony, "Hers was a heroic life." The Department of Rare Books and Special Collections commemorated this heroic life with an exhibition of letters, photographs, printed material and memorabilia drawn from its extensive Anthony and woman suffrage collections. The exhibition opened on the 100th anniversary of Susan B. Anthony's death and continued through August 2006.

Gilbert and Sullivan: From London to America 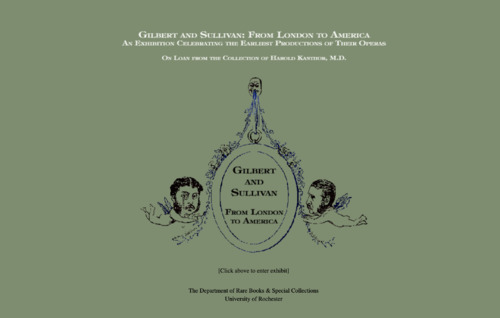 This digital exhibition was originally created in 2005 in a different digital platform and has been recreated in Omeka in 2020. 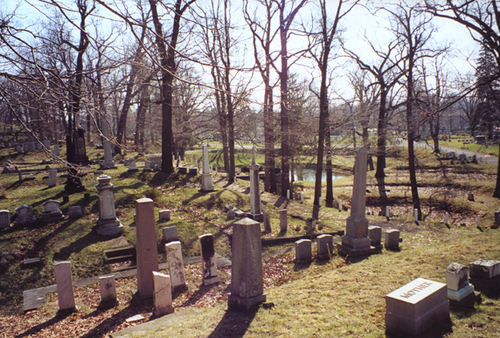 This exhibit explores the connections between Mt. Hope Cemetery and the University, and was curated by students in Th. Emil Homerin's Speaking Stones course

To the Dandelion Yellow We Will E'er Be True 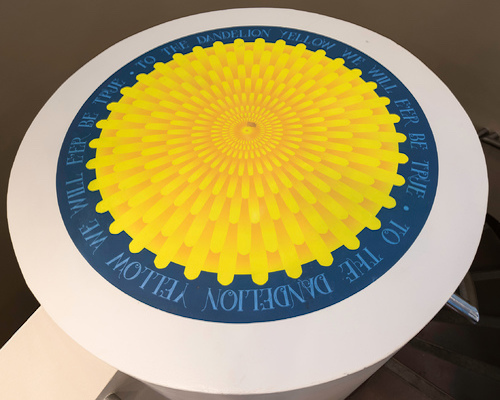 In 1861, the University of Rochester moved to a new campus. It had just one building, some houses for faculty, and ample open land--land full of dandelions.

This exhibit pulls examples from the University Archives to explore the deep roots of our favorite flower.

Evolutions in Space: The Rush Rhees Library Addition at 50 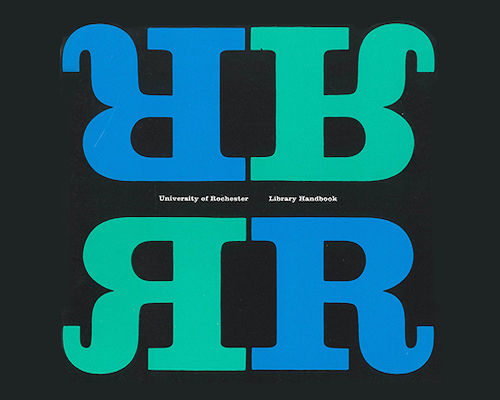 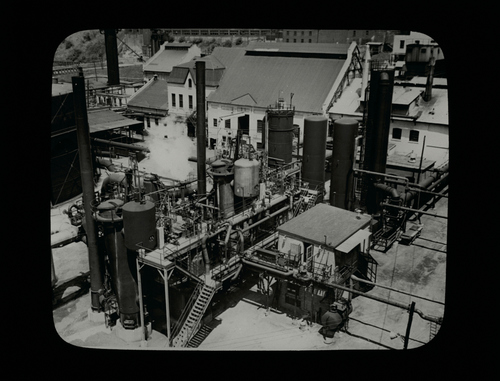 This online exhibit presents images of some of the over 500 glass plate lantern slides which make up the Rochester Gas & Electric Lantern Slide Collection. The images here include photographs of Rochester-area streets, workers, equipment, gas flames, construction sites, cartoons, advertisements, diagrams, charts of figures, and maps.

The majority of the image content is unidentified, and any details which would provide context are eagerly welcomed.

We Want More and We Will Have It: Women Running Rochester 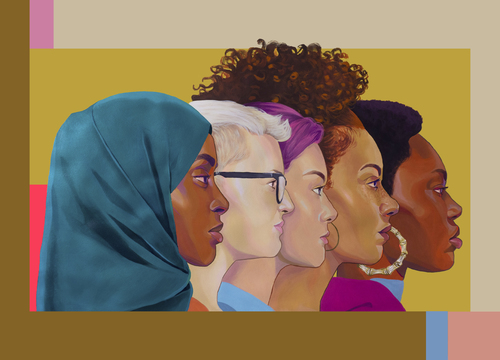 “Women don't get half as much rights as they ought to; we want more, and we will have it.” 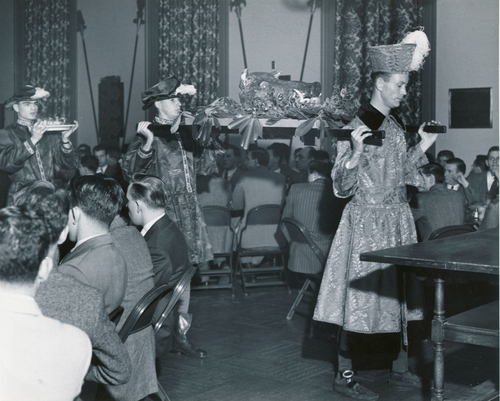 Since 1934, the students of the University of Rochester have welcomed the winter season with the Boar's Head Dinner.

90 Years Beside the Genesee 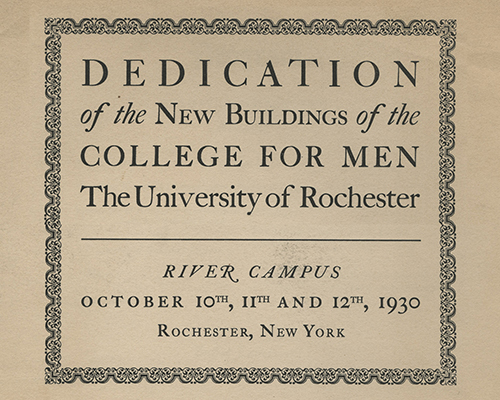 October 2020 marks 90 years since the dedication of the River Campus.

Lincoln and his Circle 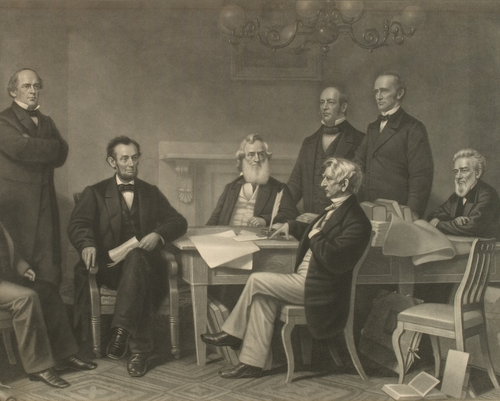 The project has digitized and makes available the letters to, from, and about Abraham Lincoln that are held in the University's collections. 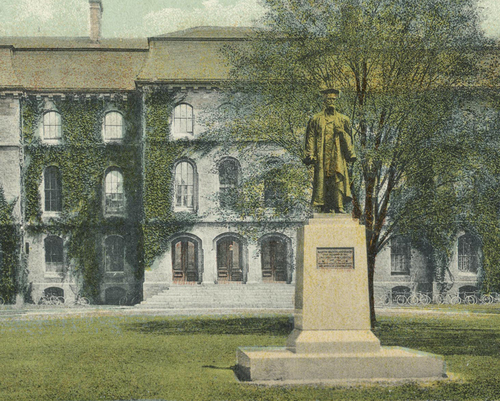 Upon his retirement in 1964 after almost 40 years of teaching  at the University of Rochester, Professor Arthur J. May was appointed University Historian to write a history of the University. 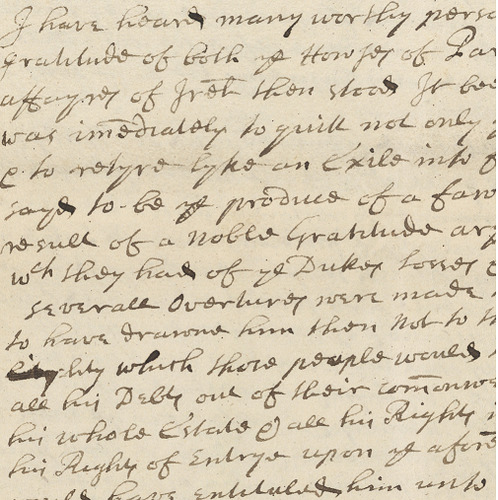 Presenting the 2021 Experiencing History Directly project, supported by the Zagorin Fund. The Experiencing History Directly project pairs an undergradute and graduate student from the History Department and gives them the opportunity to do in-depth research and study with original materials in one of RBSCP's collections. This online project presents the work of Keegan Matthews and mentor Alice Wynd, examining a 17th century manuscript containing Sir Robert Southwell's biographical notes on the 1st Duke of Ormond. Additionally supported by the Rossell Hope Robbins Library & Koller-Collins Center for English Studies. 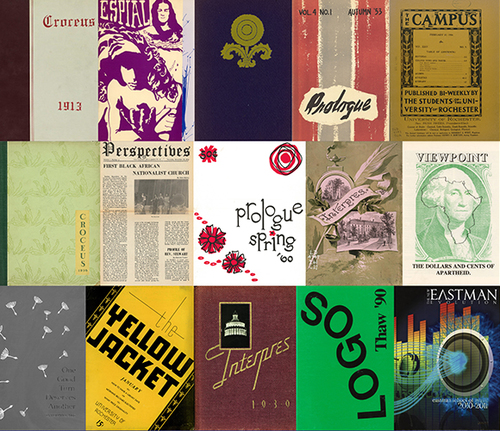 The history of the University of Rochester has been, and still is, recorded by its students. This exhibition presents yearbooks, newspapers, creative and literary journals, humor magazines, and student group newsletters. 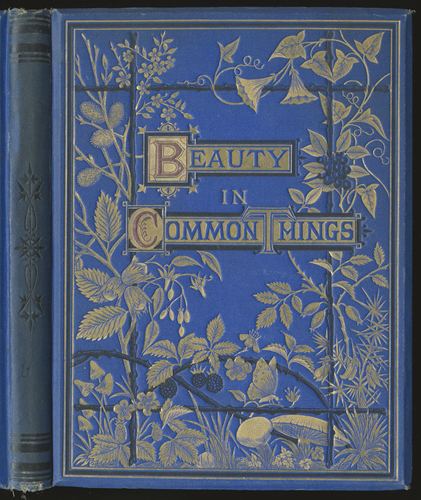 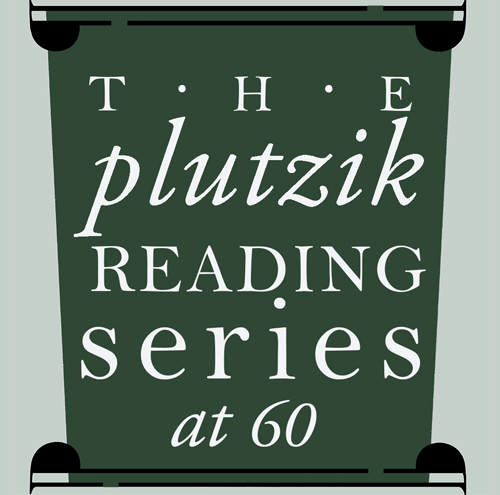 This online exhibit celebrates the life of Hyam Plutzik on the occasion of the 60th anniversary of the Plutzik Reading Series and draws upon exhibitions created in 1982, 2011, and 2012.

'We must all appear before the Lord': Religious Transcriptions of the Early Modern Era 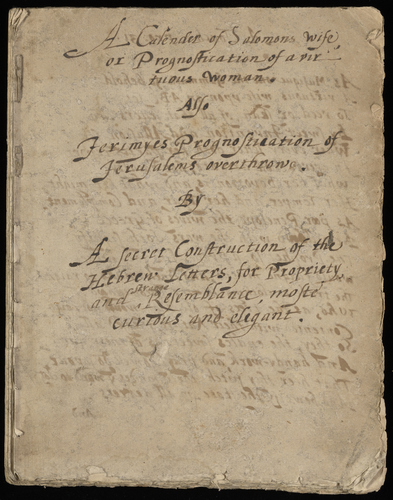 "Wherefore we labour that wether
present or absent we may be accepted of him, for
wee must all appear before the Lord."
- John Eaton, c1619

While many English-language manuscripts of the Early Modern Era were legal documents and records, such as indentures, for example, this exhibit will focus on the transcription of religious writings (Siebach-Larson, 2022).

Religion is key to history.

Wars, the establishment of governments and societal structures, hysteria, persecutions, and so on were ignited from religious thought, belief, and practice. If we are to understand not only this era, but the experiences and lives of those who lived it, we must jump into the study of religion–and into the study of our two manuscripts: The Religious Meditations of John Eaton and Jerimyes Prognostication of Jerusalem's Overthrow.

From Blossoms to Persimmons: Examining the Poetry of Li-Young Lee 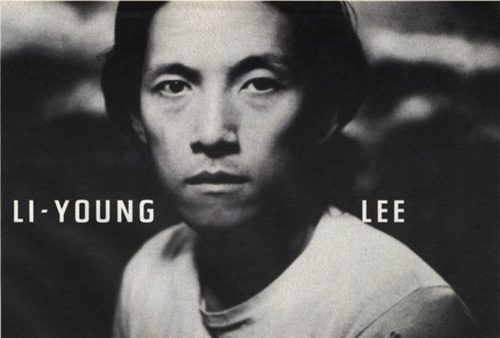 Celebrating Rochester's Rocky Simmons: The Life and Photographs of an African-American Activist 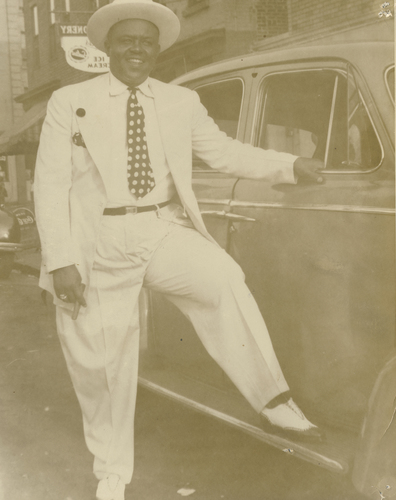 Rocky Simmons (1915-1994) was a dynamic presence in Rochester and an iconic figure in the black community for several decades. He was a gifted athlete, an astute politician, the first African-American Court Attendant in Monroe County, an organizer of youth activities, a professional photographer and much more. He was a man who made things happen for the better. Everyone knew Rocky. He described himself as “the last rock standing.” In this exhibit you will see photographs of Rocky throughout his life, as well as photographs that he took of the people and places he cared about.

This exhibit would not have been possible without the help of Rocky’s family: his wife Beatrice, daughters Michelle Simmons and Roxie Simmons Sinkler, and sons Wynder and Dwayne Simmons. 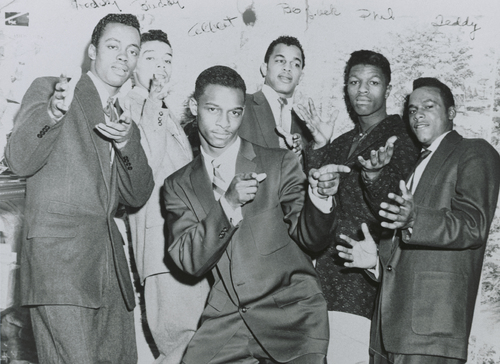 Writings of Consequence: The Art of John A. Williams 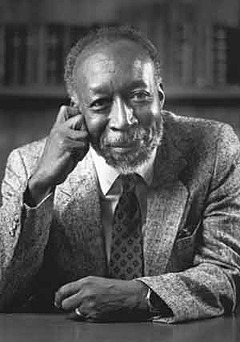 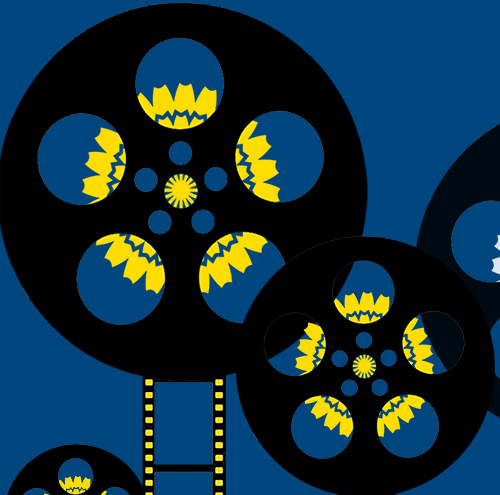 The history of the University of Rochester is not just found in texts and photographs. Our past speaks and moves—it marches, sings, performs, inaugurates, and commences in hundreds of audio and visual recordings dating from the early 1920s to the present.

Over the Rainbow and Around the World: Real and Imagined Voyages in Rare Books and Special Collections

This project serves as a permanent resource for continuing conversation, learning and research around Rochester's role in civil rights history. We also hope the site will identify other participants. The Department seeks collections of personal or organizational papers, images, and ephemera related to Rochester's black freedom experience in the 1960s and '70s – especially materials related to the riots and the city's recovery.

For further information about the Rochester Black Freedom Struggle Online Project, email us at RAREBKS@library.rochester.edu.