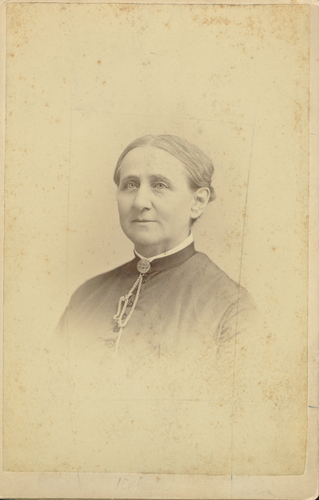 Antoinette Brown Blackwell (1825-1921), the first woman to be ordained in the United States by a mainstream denomination, was born in Henrietta, New York. She studied at the Monroe County Academy and graduated from Oberlin College in 1847. She met resistance from her family and Oberlin officials when she applied to continue her studies in theology. She was finally allowed to take the courses, but denied a degree when she completed the program in 1850. For two years after leaving Oberlin she lectured on woman's rights, temperance, and anti-slavery. On September 15, 1853, she was ordained as the minister of the First Congregational Church in Butler and Savannah, Wayne County, New York. After her marriage to Samuel Blackwell in 1856, she continued to speak and write on behalf of woman's rights. 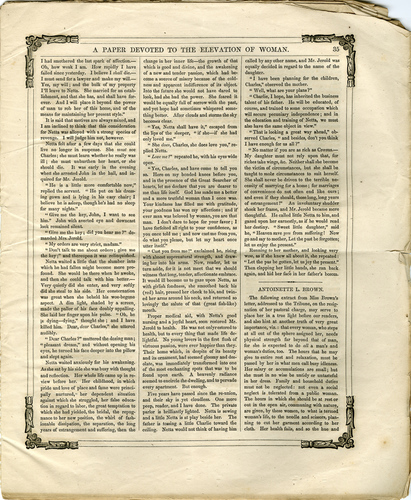 In this letter, printed in the March, 1855 issue of the Una, Antoinette Brown describes the hardships and prejudices she encountered as a parish minister. 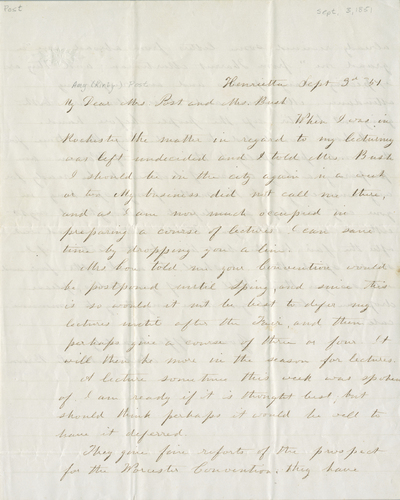 In this letter of September 3, 1851 to Amy Post, Antoinette Brown writes that she has "concluded to devote my time for this winter principally to the cause of Woman-- am preparing a long course of lectures to be ready for any emergency." 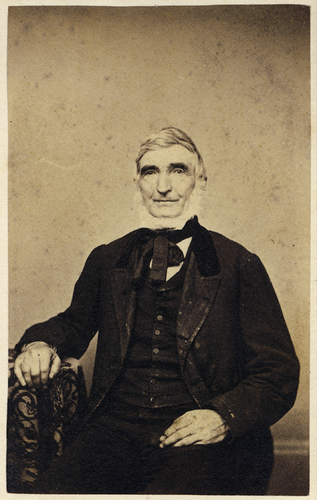 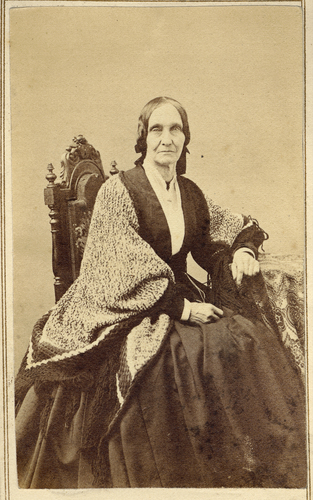 Amy (1802-1889) and Isaac (1798-1872) Post moved to Rochester from Long Island in 1836. They were active advocates of temperance, spiritualism, and abolition. They were close friends of Frederick Douglass and their home on Sophia Street was a station on the underground railroad. Amy Post was equally dedicated the question of woman's rights and attended the Seneca Falls and Rochester conventions in 1848. Shown here and throughout the exhibition are letters to Amy Post from several leaders of the movement. 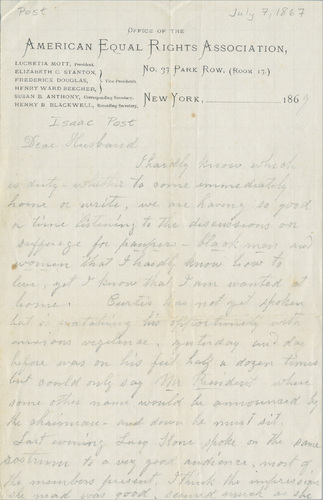 "... Susan [B. Anthony] is here. It seems that she & Mrs. Stanton were here at the time we were first notified and spoke befoe a committee of the whole, but the papers were as they are this morning, as silent as the grave upon it. When will party politicks learn to be just." 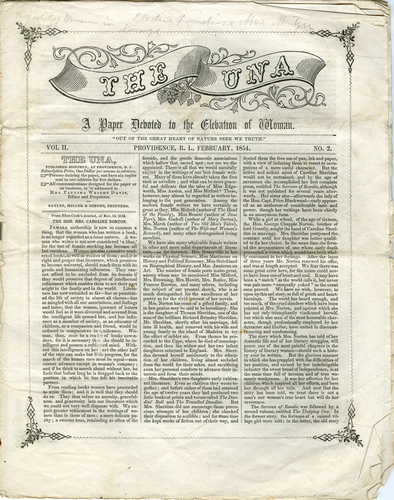 Notice from William Henry Channing in the Una

William Henry Channing (1810-1884) was the minister of the Unitarian Society in Rochester between 1852 and 1854. An advocate of women's rights, Channing attended the 1852 Syracuse Convention. In this issue of the Una (February, 1854), he placed a notice requesting men and women to sign two petitions, one for the just and equal rights of women in regard to wages and children and another in support of woman suffrage. The petitions came out of a convention held at Corinthian Hall in Rochester the previous November.

(From the collection of the Susan B. Anthony House) 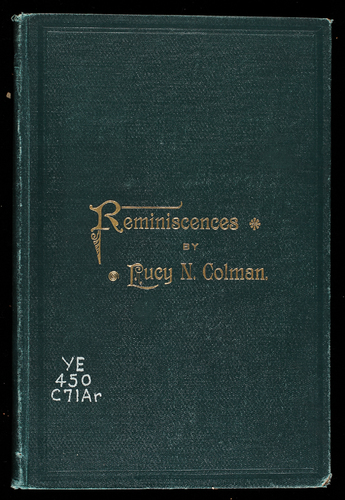 Lucy Colman (1817-1906), an ardent abolitionist and advocate of women's rights, was a close friend of Amy Post. 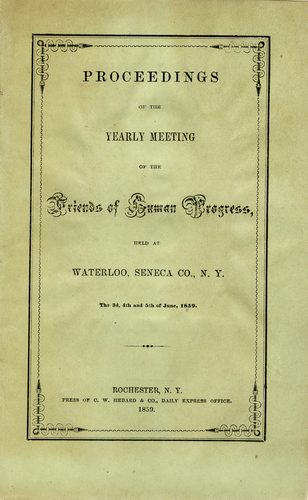 Proceedings of the Yearly Meeting of the Friends of Human Progress Held at Waterloo, Seneca Co., N.Y. (Rochester: 1859).

Proceedings of the Yearly Meeting of the Friends of Human Progress Held at Waterloo, Seneca Co., N.Y. (Rochester: 1859).

At their June 3-5, 1859 meeting the Friends of Human Progress passed resolutions condemning slavery and calling on women "to cultivate in themselves a firmer self-reliance, and a bolder practical assertion of their rights to engage in any and every useful vocation to which they are demonstratively adapted." Amy Post served as secretary of the meeting, and Lucy Colman was on the business committee.