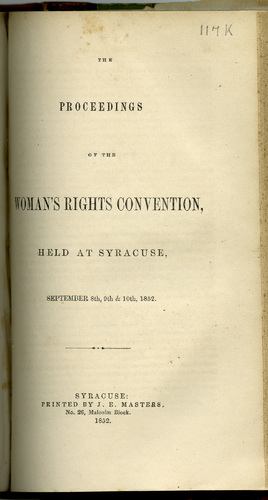 The Proceedings of the Woman's Rights Convention Held at Syracuse. (Syracuse, 1852.)

The third national woman's rights convention was held in Syracuse on September 8 to 10, 1852. This was the first convention attended by Susan B. Anthony. 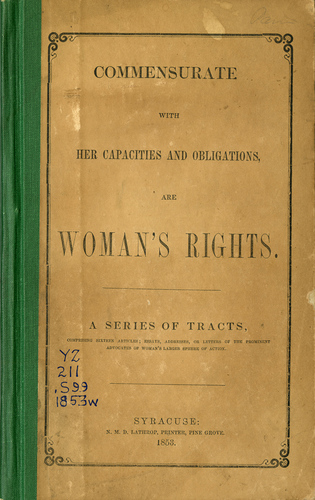 Matilda Joslyn Gage. "Speech of Mrs. M. E. J. Gage at the Woman's Rights Convention held at Syracuse, Sept. 1852." In: Commensurate With Her Capacities and Obligations, Are Woman' s Rights. A Series of Tracts. (Syracuse, 1853.)

Matilda Joslyn Gage (1826-1898) was born in Cicero, New York and lived in Fayetteville, New York after her marriage in 1845. Gage, who became a prominent organizer and writer for the cause, first attended a woman's rights convention when it was held in Syracuse in 1852. Here she delivered a speech which strongly criticized woman's subservience and advocated educational and legal equality for women. 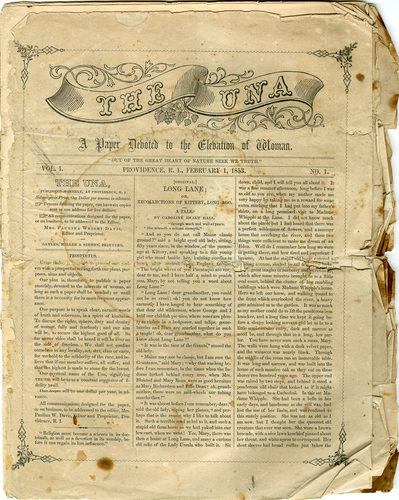 Paulina Wright Davis (1813-1876) was born in Bloomfield, New York and lived in Niagara Falls, LeRoy, and Utica before moving to Providence, Rhode Island, after her second marriage in 1849. Davis was active in petitioning the New York State Legislature during the 1830s for a married woman's property law. An early participant in the woman's rights movement, she helped organize several conventions. In 1853, Davis began publishing the woman's rights newspaper, The Una. 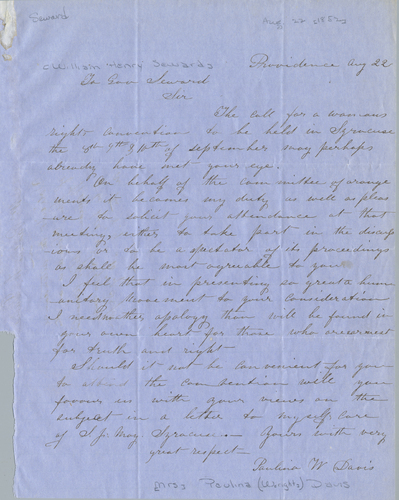 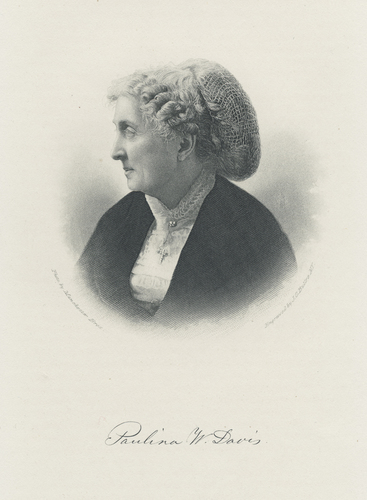 Davis wrote Seward, the former Governor of New York State and then United States Senator, to invite him to attend the Woman's Rights Convention to be held in Syracuse the following month. Seward neither attended the convention, nor honored Davis's suggestion that he express his views on women's rights in a letter to be read at the convention.