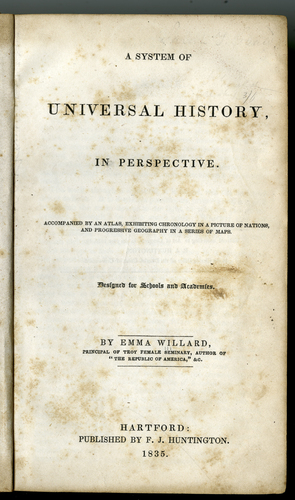 Emma Willard (1787-1870) founded the Troy Female Seminary in 1821. Here young women had the opportunity to take courses in classical and scientific studies on the same academic level as those being taught in male colleges. Elizabeth Cady Stanton was a student at Troy Female Seminary, graduating in 1832. This copy of Emma Willard's textbook was used at the Seward Seminary, a school for girls operated in Rochester by Sarah T. Seward, another graduate of Troy Female Seminary. 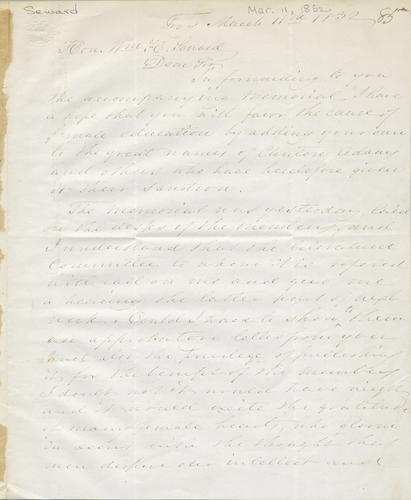 In this March 11, 1852 letter, Emma Willard asks William Henry Seward to endorse education for women since "it would excite the gratitude of many female hearts, who gloom in secret with the thought that men despise our intellect and unjustly withhold from us the means which they have dealt to the other sex." 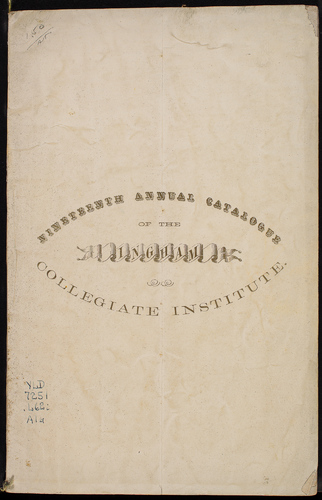 In 1837, Emily E. and Marietta Ingham founded the LeRoy Female Seminary in LeRoy, New York. In 1852, the seminary affiliated with the Genesee Synod of the Presbyterian Church and changed its name to the Ingham Collegiate Institute. In 1857, the school changed its name again to Ingham University. Although Ingham claimed to be "the first to introduce a college curriculum for the education of young ladies," its academic standards were not as rigorous as those at such institutions as Elmira College, founded in 1855. 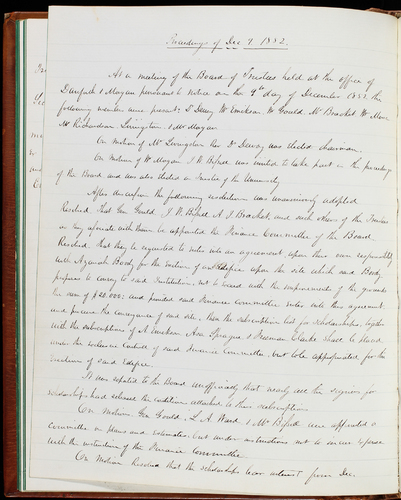 Proceedings of the Board of Trustees of the Barleywood Femail Seminary (December 9, 1852)

In 1852, two years after the founding of the University of Rochester, an attempt was made to establish a local college for women. Subscriptions of some $15,000 were pledged and a Board of Trustees was selected with Azariah Boody as President, Jacob Gould as Treasurer, and Lewis Henry Morgan as Secretary. After an auspicious beginning, the enterprise floundered, apparently due to financial difficulties. These minutes of the Board of Trustees of the Barleywood Female University, as recorded by Lewis Henry Morgan, end abruptly in 1853. 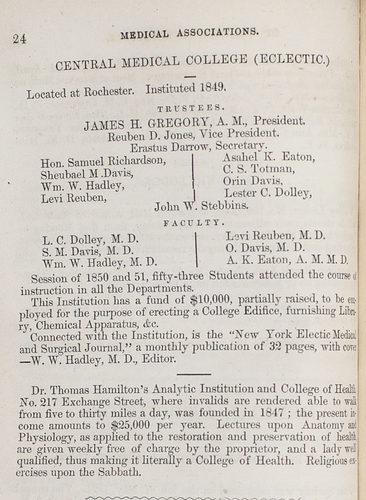 Lydia Folger Fowler and Sarah Dolley were the second and third women to receive a degree in medicine. They both graduated from Rochester's Central Medical College (Fowler in 1850, Dolley in 1851).

Shown is a description of the College from the 1851-52 Directory of the City of Rochester. A statement from the College endorsing female medical students that appeared in the May, 1850 issue of the Lily:

Who can have the hardihood to deny to woman less than an equal right in this, to her, most important respect? In regard to the capacity and application of females to acquire and push their investigations into the most difficult and apparently unattractive branches of medical science, we are happy to have the power of adding our testimony, decidely in their favor. Could any hard hearted skeptic visit Central Medical College, and witness the thorough and faithful devotion of our lady students to actual dissections, and listen to their correct and ready answers, not only on this but on all the collateral branches of medical science, fully equal to our ablest male students, their doubts would soon clear away, like fog before the brilliant sun and gentle breeze of morning. We repeat--our female students have proved themselves equal to any of the opposite sex, thorough investigators of medical science; and we ernestly solicit a large addition to the female department of our College. 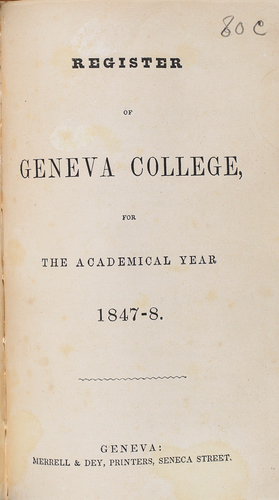 Elizabeth Blackwell (1821-1910) was the first woman to receive a medical degree. Determined to study medicine, she applied to all the major medical schools before being accepted at Geneva College in 1847. Blackwell (misspelled "Blackwill") is the fifth medical student listed in this 1847-48 catalog of the College.

Genesee College in Lima, New York, was founded in 1850 as a co-educational institution. Its most famous graduate was Belva Lockwood (class of 1857), who in 1879 became the first woman lawyer admitted to practice before the Supreme Court of the United States.

The University of Rochester was founded in 1850 as an all male institution. In the 1880s, women began to petition the University to open its doors to female students. Finally in 1898 the Board of Trustees voted to allow women to enter the University if they defrayed expenses by raising $100,000 (approximately $2,000,000 in today's money). A committee of women led by Helen Barrett Montgomery raised $40,000 over the next two years. In June, 1900 the Board agreed to admit women students that September if the women could secure another $10,000.

During the summer of 1900, the committee was able to raise another $2,000, but the day before the deadline, $8,000 remained. At this point, Susan B. Anthony took charge, aided by Fannie Bigelow. She solicited the first $2,000 from her sister Mary, the second from Sarah Willis, and the third from Rev. and Mrs. William Channing Gannett. Still short $2,000, Miss Anthony pledged her life insurance policy, thus guaranteeing the admission of women to the University of Rochester in the fall of 1900. Minutes of the Board of Trustees for September 8, 1900, the day Susan B. Anthony, Helen Montgomery, Fannie Bigelow presented the last of the $50,000 in pledges for co-education. 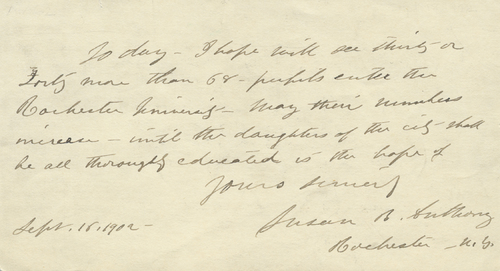 Note written by Susan B. Anthony on the occasion of the third class of women entering the University in September, 1902. 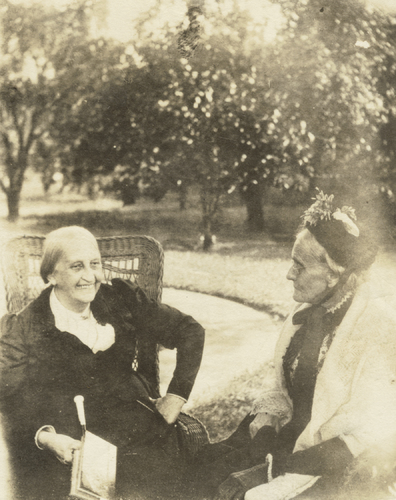 This photograph of Susan B. Anthony (right) and Jean Brooks Greenleaf (left) was taken at Greenleaf's Rochester home shortly after the University of Rochester was open to women students. Greenleaf was the president of the New York State Woman Suffrage Association for several years. 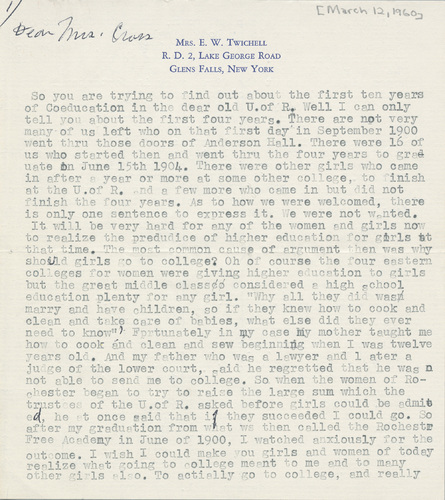 Vera Chadsey Twichell, a member of the Class of 1904, wrote this letter sixty years after she entered the University of Rochester as a freshman in the fall of 1900. In it she recalls the excitement she felt when women were admitted to the University, and the hostile reception she and the other women students received from many of the men students. The recipient, Helen Rogers Cross, graduated in 1905. 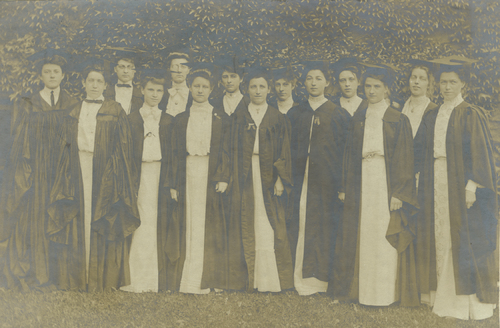 The women graduates in the class of 1904. Vera Chadsey Twichell is the sixth from the left. 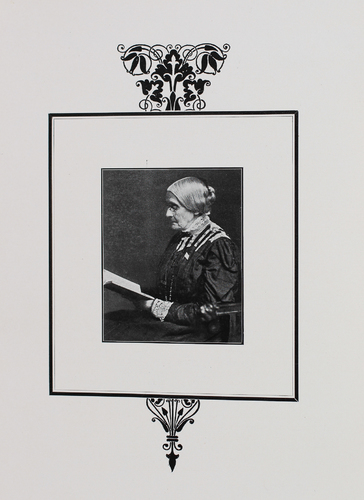 The first issue of the Croceus (1910), the yearbook of the College for Women, was dedicated to the memory of Susan B. Anthony "as a token of the love, appreciation and gratitude of the women of the University of Rochester." 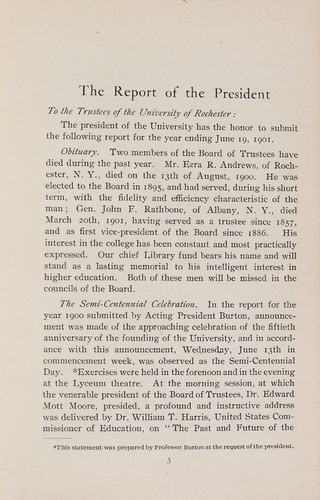 In his 1901 report to the Trustees, President Rush Rhees expressed his preference for "co-ordinate education," where men and women attend the same college, take most of their classes and laboratory work together, but in certain courses, where more delicate subjects may be discussed, such as literature, physiology, and hygiene, there be separate sections to "allow for full and frank consideration to all phases of the matter under discussion."