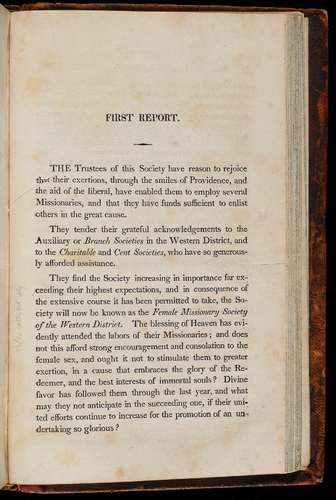 The First Annual Report of the Trustees of the Female Missionary Society of the Western District (Utica, 1817)

In the late eighteenth and early nineteenth centuries a wave of religious revivals swept across New England and New York State. The converted were exhorted to work for the salvation of others. Women's participation in this undertaking was welcomed, and through organizations such as the Female Missionary Society of the Western District they raised money to spread the Gospel, found churches, and distribute tracts. These undertakings gave women their first experience in working together for a semi-public cause. 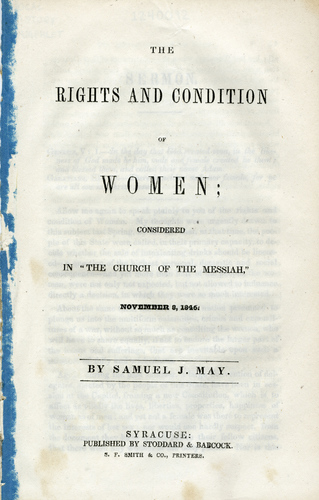 May, a Unitarian minister in Syracuse, was one of the first ministers to address his congregation on the rights of women:

We may, with no more propriety assume to govern woman, than they might assume to govern us. And never will the nations of the earth be well governed, until both sexes… are fairly represented. 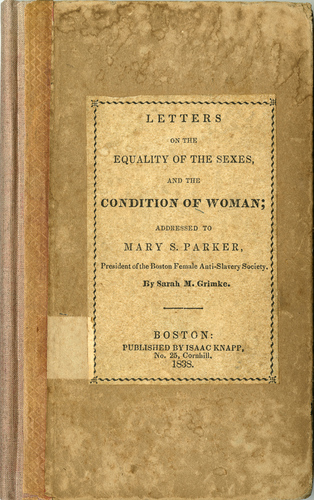 Sarah Grimke. Letters on the Equality of the Sexes, and the Condition of Woman (Boston, 1838). First edition.

Women became as active in the abolitionist cause as they had been in benevolent work. Their activities on behalf of the slave were much more public, however, and included petitioning and public speaking. In this famous tract, the South Carolinian Sarah Grimke‚ defended the right of women to speak in public in defense of a moral cause since both "men and woman were created equal; they are both moral and accountable beings, and whatever is right for man to do, is right for woman." 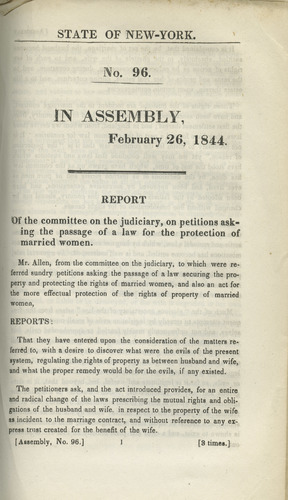 A petition to change the New York State law and allow women to retain ownership of the property they possessed before marriage, was first introduced in 1836. Yearly petitions presented to the Legislature were denied. In this 1844 report, the Judiciary Committee found against the proposal saying that such a law would make women too independent of their husbands and undermine marriage, morals, and the state itself. The bill was finally passed in 1848, making New York the first state to pass a married woman's property law. 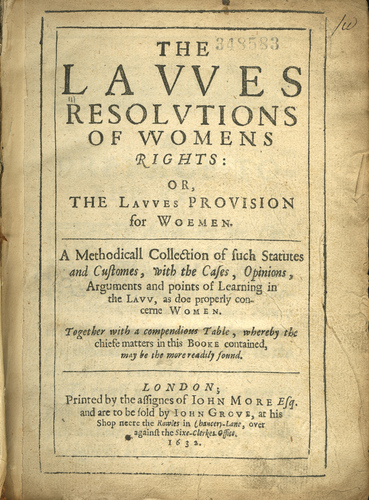 The Lawes Resolutions of Womens Rights: or, The Lawes Provision for Woemen (London, 1632).

New York State followed English common law in regard to the right of women to retain their property after marriage. This 1632 compilation of laws regarding women states:

Whatsoever the Husband had before Coverture either in goods or lands, it is absolutely his owne, the wife hath therein no seisin at all…

For thus it is, if before Marriage the Woman were possessed of Horses, Neate, Sheepe, Cowe, Wool, Money, Plate and Jewels, all manner of moveable substance is presently by coniunation the husbands, to sell, keepe, or bequeath if he die: And though he bequeath them not, yet are they the Husbands Executors and not the wives which brought them to her Husband. 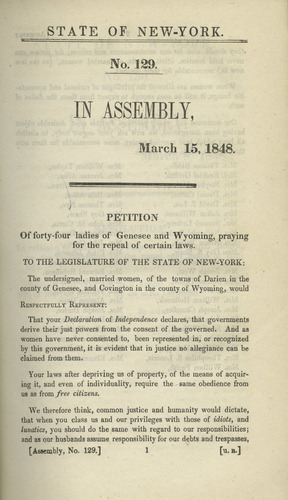 Documents of the Assembly of the State of New York. 71st session, volume 5, document 129

On March 15, 1848, four months prior to the first woman's rights convention in Seneca Falls, forty-four women of Genesee and Wyoming County declared to the New York State Assembly that they owed no allegiance to the government since they were deprived of their political rights. Their petition states: When women are allowed the privileges of rational and accountable beings, it will be soon enough to expect from them the duties of such.