In July 1964, race riots broke out in Rochester. Up until this time, hiring rules set by the unions stipulated that employees had to hold high school diplomas in order to work at Xerox—out of almost a thousand employees, only two were African-American. Wilson, already well aware of the issues which led to the riots, met with Minister Franklin Florence, leader of the Rochester civil rights group FIGHT.

"I hear you're interested in jobs. Well, we need workers at Xerox." Together, Wilson and Florence created a training program at Xerox for African-American workers, one which allowed them to earn their high school diplomas and learn the skills needed to be part of the Xerox workforce. 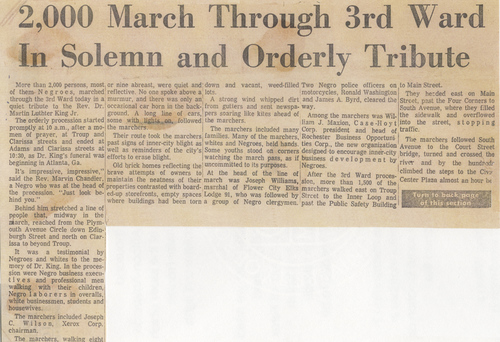 When Martin Luther King was assassinated in April, 1968, there were peaceful marches in Rochester’s Third Ward—the same location as the 1964 riots—and Wilson joined the marchers. 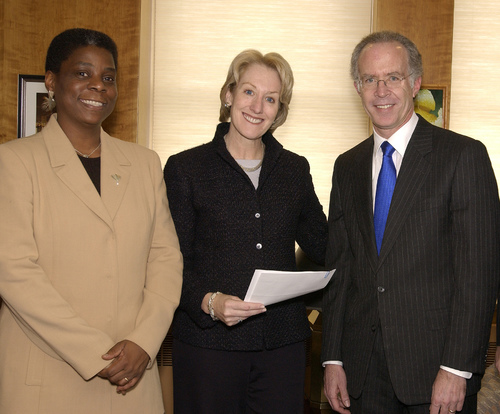 In 1951, Wilson said, "Have you noticed that women work in only 2 areas of our company: they're either clerical or factory workers. We have no women who are executives or even in line to become executives. I think that's disgraceful."

In 2001, Anne Mulcahy became CEO of Xerox, having joined the company in 1976 as a sales representative; Ursula Burns was a summer intern in 1980 and became Xerox’s CEO in 2009.

In 2015, the "Wilson Rule" was highlighted by President Obama to promote inclusive entrepreneurship. The rule promotes diversity by requiring that "women and minorities be among the final pool of qualified candidates for open management and senior-level professional positions." 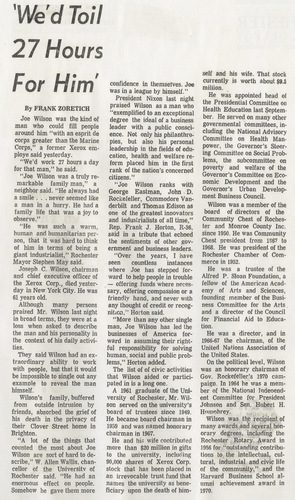 Wilson supported the workers of Haloid and Rectigraph in their efforts to unionize; he recognized the achievements of his employees, and their loyalty during the long years of developing the 914. He hated firing employees: "It's unfair to release them when they've made such a sacrifice for us." Often Wilson would move unsatisfactory employees to new departments, believing that their skills must simply lay elsewhere. When Xerox technology began to move beyond the skills of older Haloid employees, Wilson made sure that there were funds and opportunity for re-training.

On June 7, 1970, Wilson was honored by the Harvard Business School for Alumni Achievement. A common, urgent theme of his speeches was the responsibility of business to society:

Tonight I should like to talk with you from a different frame of reference than that of a business man, simply as an individual whose primary credential is citizenship and who looks at the coming decade with apprehension, even alarm.

...on one important level, the history of the American Republic is indeed a chronicle of what he [de Tocqueville] called the "habit" of national unity.

In the name of unity, we fought a bloody and terrible civil war, in whose shadow we still live some hundred years later.

By the turn of the 20th century, we had faced and met still another challenge to unity: the immigration of millions of Europeans to whom America was as strange as it was promising. Twice in this century we were called upon to gather our energies for war on the continent of our origins. So, too, the Great Depression of the 1930's tested America's capacity to bring forth from diversity an ordered and unified response to crisis.

And now, once again, the twin issues of war and race are forcing us to confront not simply the demands of minorities among us, but to confront as well the deeper problem of how we must act as a nation, as a whole people, together.

Yet, sadly, I for one cannot seem to find in the record of these past few years adequate testimony to the "habit of unity."