From Haloid to Xerox 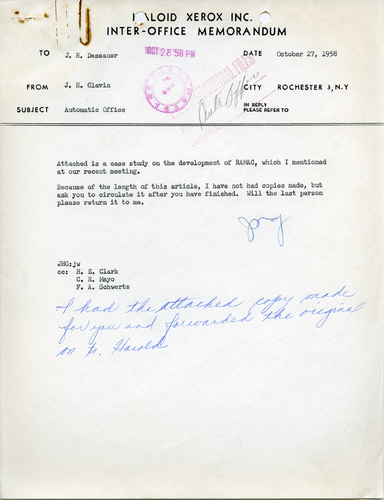 John Glavin circulated a September 1956 article entitled “Developing Profitable Product Lines” to John Dessauer, Joe Wilson and three others. The article -- which details IBM’s research and development, market research, and marketing for its new product, RAMAC (Random Access Method of Accounting and Control) -- would have been instructive to the Haloid team in the development and launch of what would become the 914.

The typed memo attached to the article notes that Glavin felt the the article was too long to copy, and so he was circulating the original; in fact Glavin’s handwritten note to Dessauer says that he has made a copy for his (Dessauer’s) use. The copy is not the usual white-text-on-black-background negative Haloid photocopy, but was made on Agfa paper using the “Copyrapid” process. 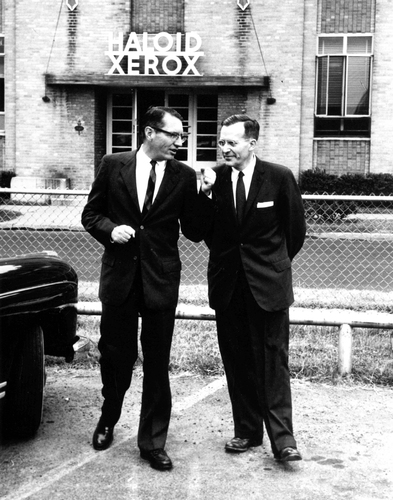 To produce a working copier on an assembly line was a daunting task for Haloid, and they considered partnering with a larger company. Haloid commissioned a study by Ernst and Ernst to determine what market existed in the business office setting, and the results helped estimate how many units could be sold, how it would be used, the possible price point, etc.

But as with other market studies done - most notably one by IBM, which led to IBM's decision not to manufacture the 914 for Haloid - the potential of xerography was grossly underestimated.

Horace Becker, engineer at Haloid who saw the 914 into production, noted that the studies considered the point of origin -- how many copies were initially created of an original document -- rather than point of receipt -- how many copies were made for distribution. Glavin's memo about distributing the RAMAC-IBM article (above) gives evidence of this, as does the title of John Dessauer's My Years with Xerox: The Billions Nobody Wanted (Doubleday & Company: Garden City, N. Y., 1971) 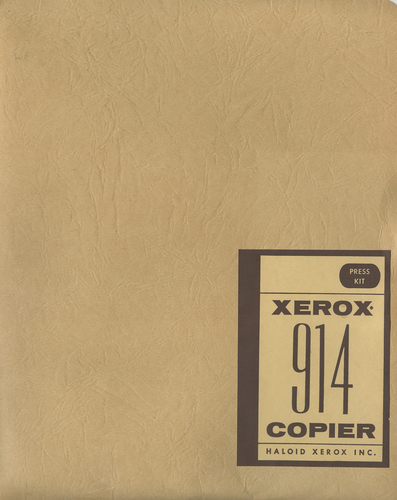 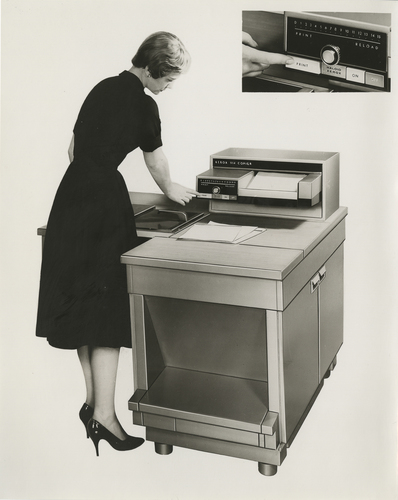 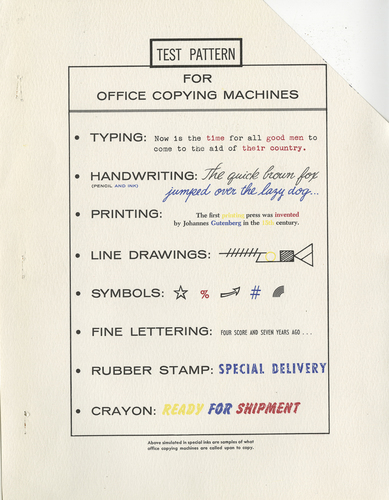 The press kit for the 914 Copier included photographs of the machine, and a series of test-pattern pages showing how xerography was superior to the reprographic options available at the time. It also featured a sample letter from Joseph C. Wilson to John H. Dessauer and a xerographic copy of that letter, essntially as a challenge to potential clients to tell the original from the copy. 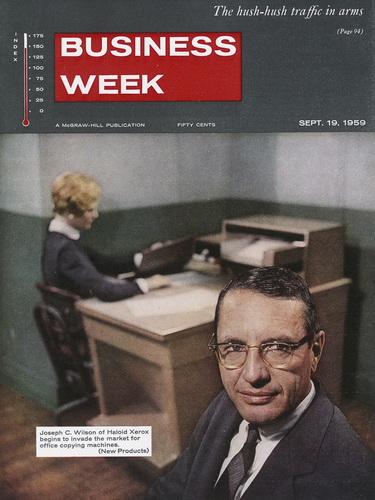 Business Week magazine featured Wilson, and the 914 copier on its cover of its September 19, 1959 issue.

We are a company which pays a premium on imagination, on the use of creativity, on the use of brains to think of new ideas. We don't want to do things that same old way - we suspect the same old way. Therefore, as you come here, I hope you come with an attitude that changes will be a way of life for you. You will not be doing things tomorrow the way you are doing them today. And if you do, we will feel that some way or other the momentum that has taken years and years to build up, is perhaps slowing down. Therefore, we’re seeking people who are willing to accept risk, who are willing to try new ideas, who have new ideas of their own, who are not afraid to change what they are doing, from one day to the next, or one year to the next, who welcome new challenges, who welcome new people, who welcome new positions. And if you're that sort of person you'll be very welcome here at Xerox.

← Wilson and Carlson
University Service →
From Haloid to Xerox