This decade's covers explode with imagery. Scenes and design elements overlap one another and flow to the very edges of the cover. Lettering trails across the boards with a fluid quality. With the advent of aluminum blocking, silver finally joined black and gold as a major design component, adding depth to layouts. Colored inks came into widespread use and contributed to the overall liveliness of the period. Satin or "s" grained cloth found favor along with other fine-grained, hard cloths. Japanese motifs and design on the diagonal continued to be popular. The incidence of blind stamping decreased. While the general level of design skill in this period is often considered to be lower than in the 'fifties and 'sixties, books of the 1880s succeed in catching the eye with their lavish use of color and metallic blocking, and occasionally, surprising originality.

By this time, mechanization was making serious inroads to the binding trade. From at least the late 1870s on, America led the way in the development of bookbinding machinery. For example, the Smyth Manufacturing Company was formed in 1880 to produce and sell the various types of sewing machines invented and patented by David McConnell Smyth since 1856. In 1872 the first patent for a wire stitcher had been granted in Philadelphia.

For most of the century, English manufacturers dominated the book cloth market. In 1883, Interlaken Mills in Rhode Island was established as the first major American producer of book cloth. They were followed by, among others, Bancroft & Sons in Delaware and Massachusetts' Holliston Mills in 1893.

Early in this decade a few publishers began to hire established artists to design their book covers and, occasionally, to illustrate the text as well. Among these artists were George Wharton Edwards, Stanford White, and Howard Pyle. Their work, and that of their fellow artist-designers, prefigured the dramatic change in cover design that was to come over the next twenty years. 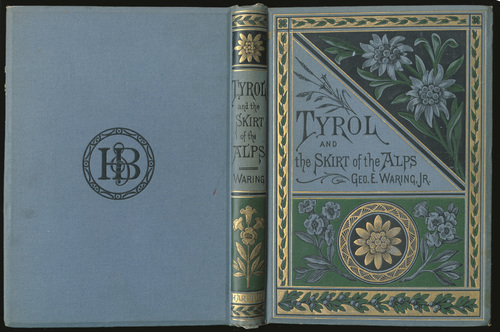 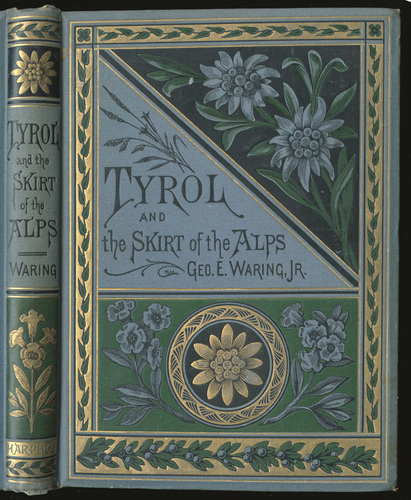 The publisher's monogram is stamped in black on the back board. 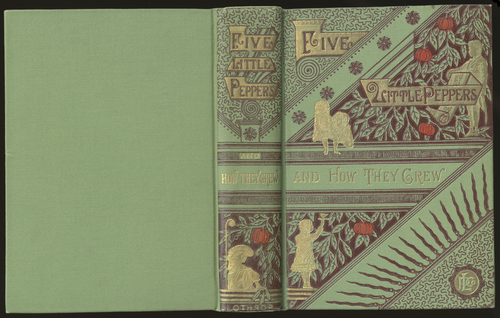 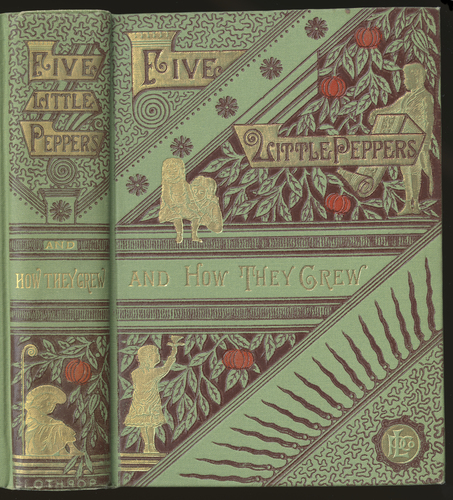 Margaret Sidney is the pseudonym of the second wife of Daniel Lothrop, who began the publishing company in 1868 and specialized in juvenile literature. This volume of the children's classic is advertised in the insert for $1.50. 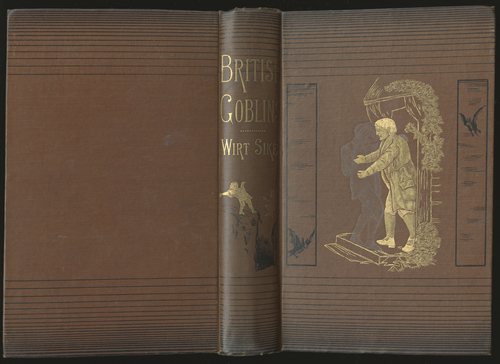 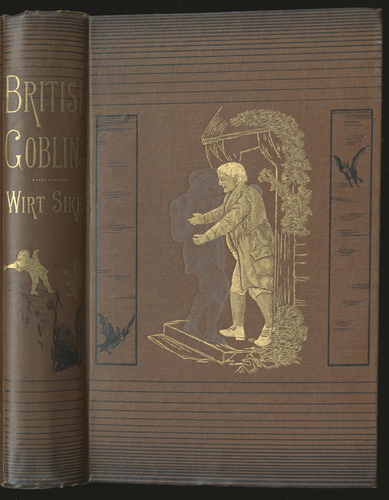 Stamping in white achieves the effect of an apparition. The black lines are carried over to the back board. 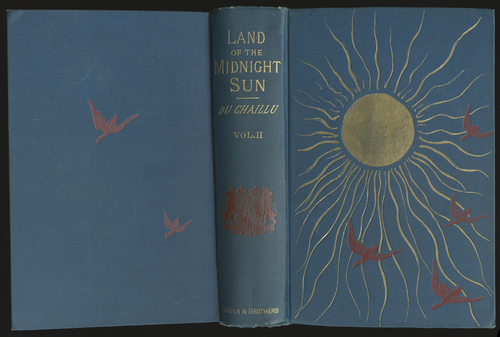 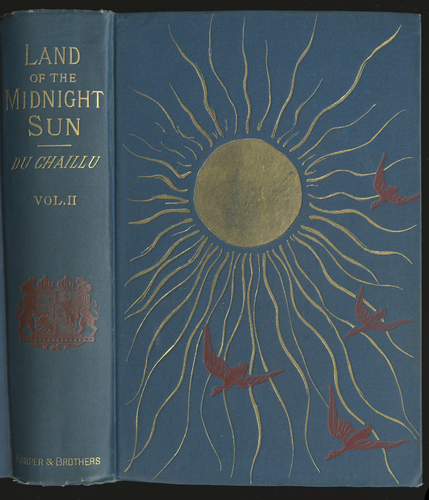 The designer of this cover, Philadelphia-born Edwin Abbey, began working as an illustrator for Harper & Brothers as a teenager and went on to become one of the most highly regarded artists of his time. The year this book was published he moved to London, and soon after joined a group of artists and writers including Frank Millet, Alfred Parsons, Henry James and Edmund Gosse in the Cotswolds village of Broadway. 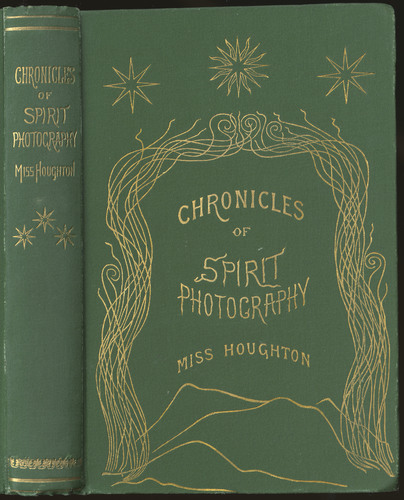 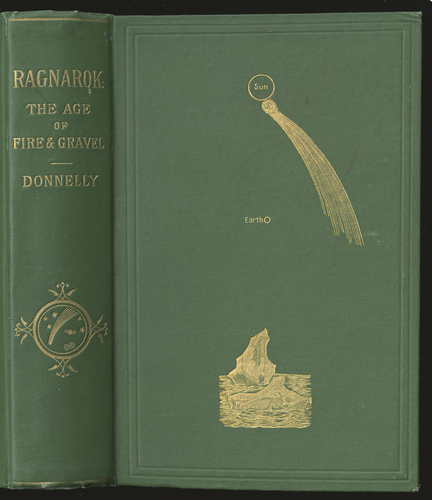 Both of these designs relate directly to the text and are decidedly modern in style. Ragnarok, offered in cloth for $2 in the publisher's insert, is described there as advancing a theory of a calamitous collision between the earth and a comet which brought a "terrible age of ice and snow." 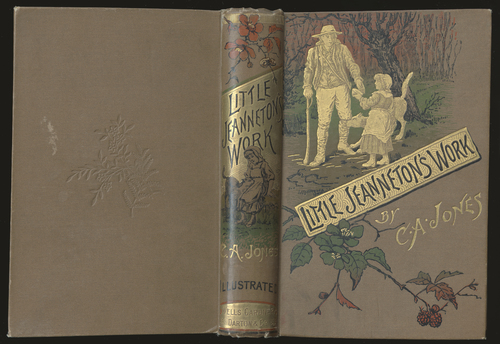 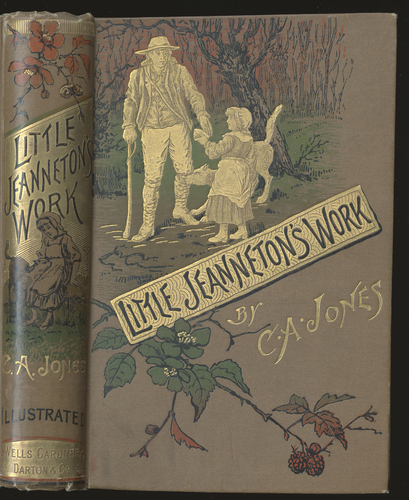 Highly glazed cloth was essential for successful polychromatic stamping. The back board is blind stamped with a floral spray. 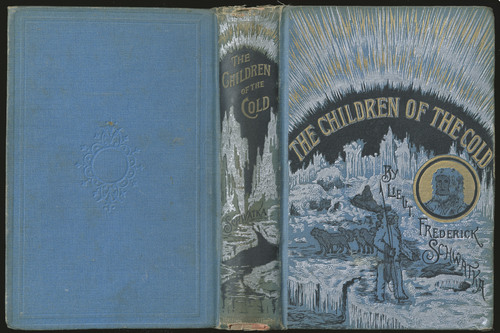 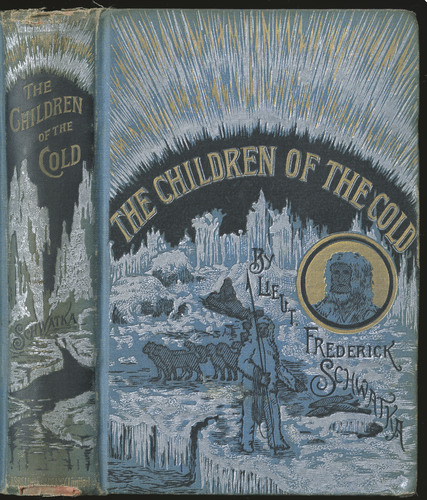 Silver stamping brings this cover to life. The back board has a simple frame and a central ornament in blind. 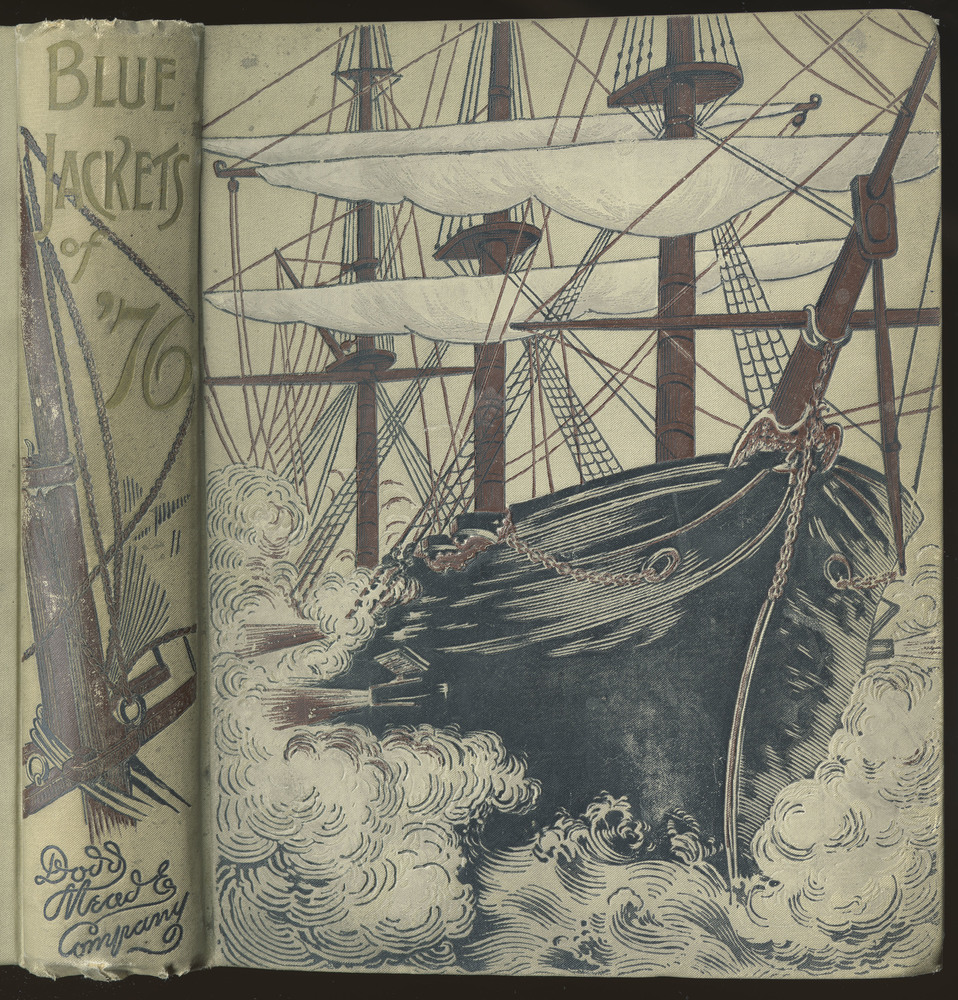 Color stamping helps bring depth to this design; the viewer can easily imagine the boat moving through the water. 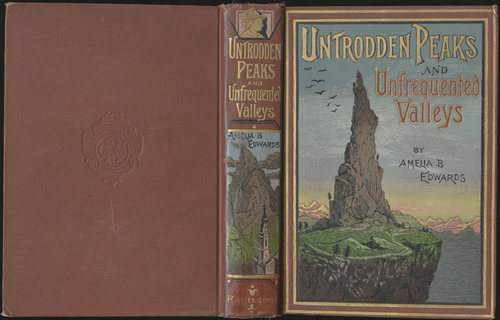 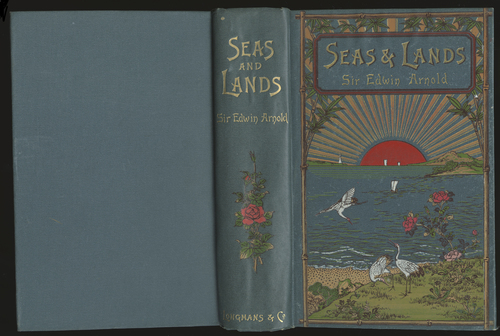 Two fine examples of polychromatic printing. The publisher's monogram appears in blind on the back board of Untrodden Peaks. 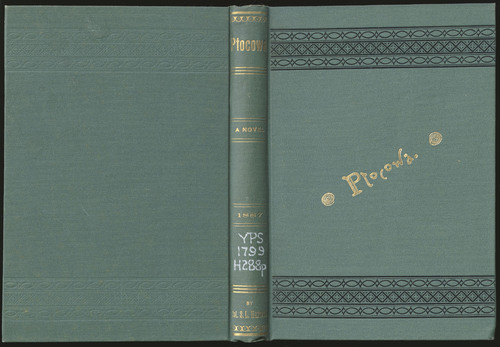 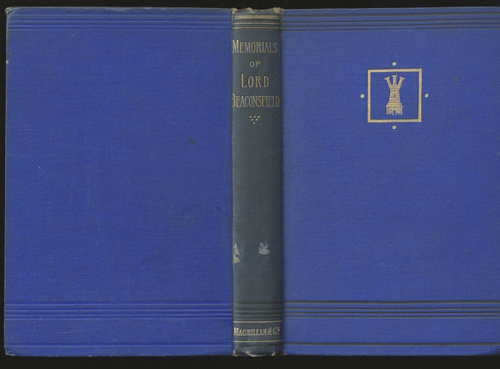 These two books' austere designs are in great contrast to bustle of the mainstream style. Bright blue cloth with embossed lines in black or blind was typical of Macmillan. 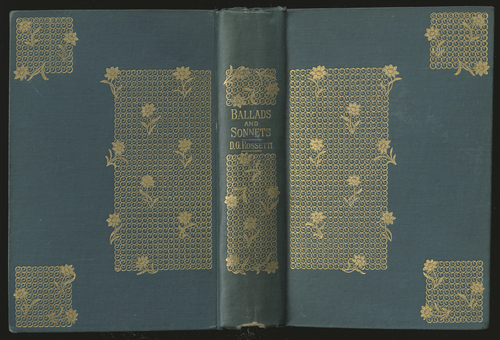 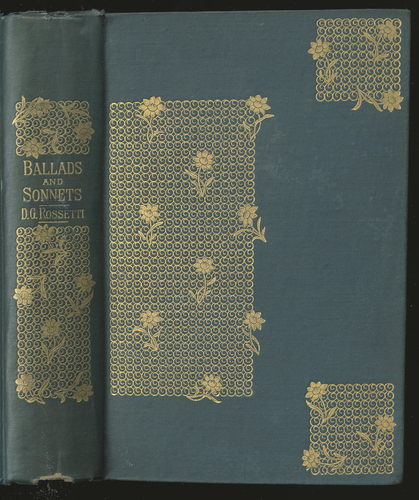 Rossetti created this design for his book Poems, published by Ellis in 1870. In addition to this title, the design was also used on later editions of Poems, and on G. J. Romanes' Poems in 1889, in addition to others. Rossetti also designed the endpapers. 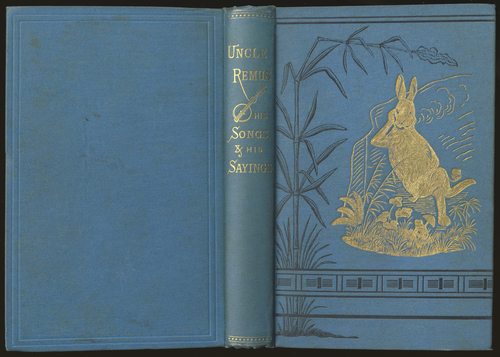 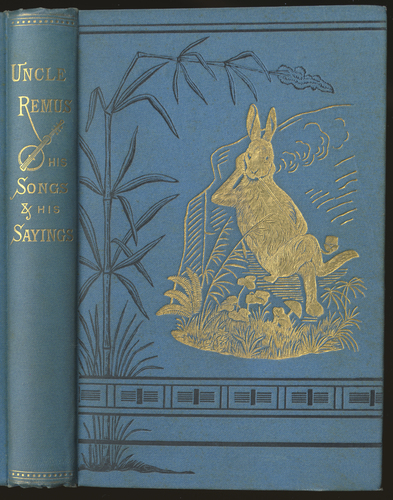 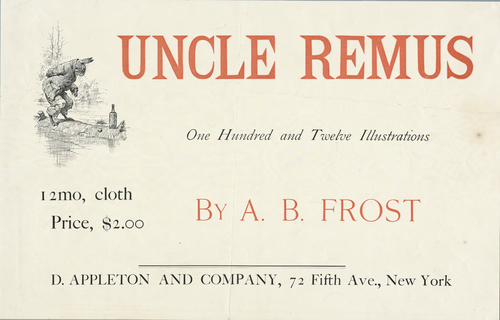 The poster design is by Frederick S. Church, one of the book's illustrators. The book cover design is by an unidentified artist. Uncle Remus originally appeared as a series of folk tales, poems and songs in the Atlanta Constitution. A reprint of one of the poems in the NY Evening Post caught the eye of Appleton's literary scout, who arranged for the publication of the book. The 1880 edition sold for $1.50 and went through four printings in the first year, selling about 500,000 copies. 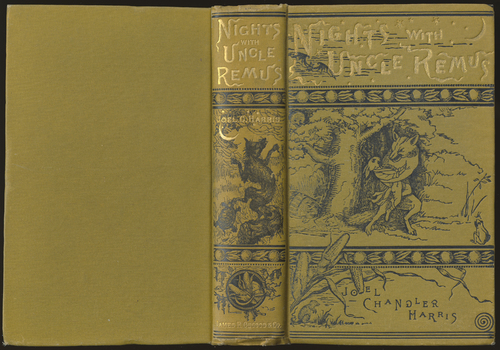 Harris' Uncle Remus was published by Appleton. For reasons unknown today, Harris took his next book, Nights with Uncle Remus, to James R. Osgood & Co. He would use several publishers during his lifetime, going to Houghton, Mifflin in 1892 with Uncle Remus and His Friends.