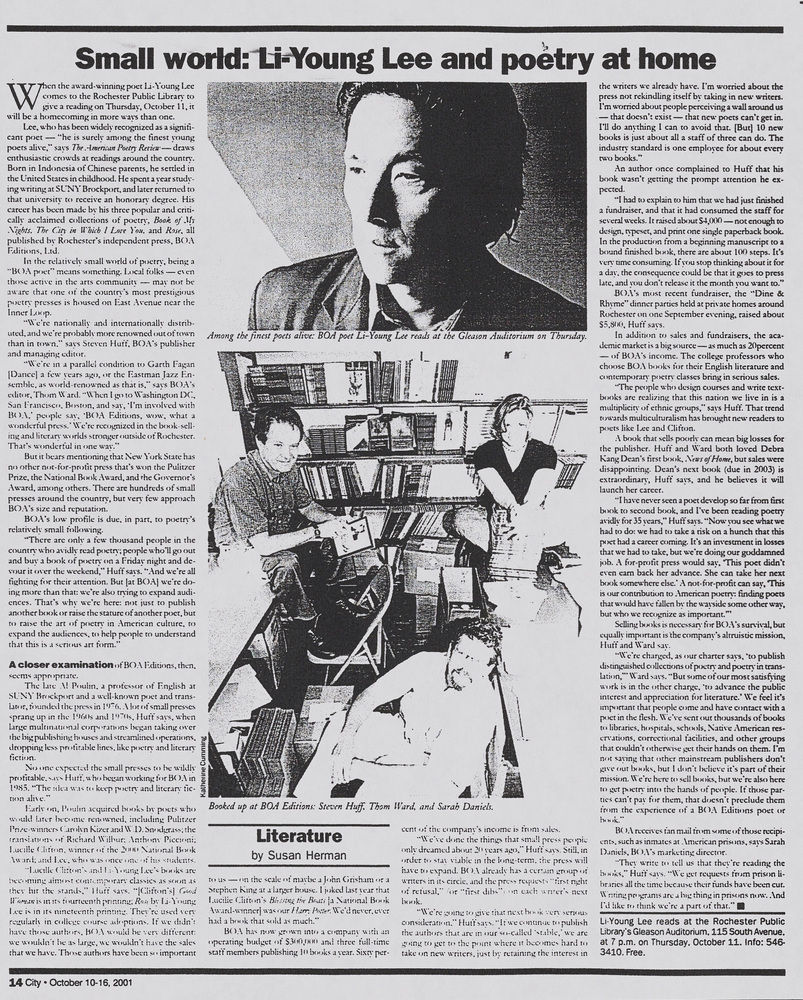 On North Goodman Ave- in a big brick building- on the third floor- behind a heavy metal blue door- to the left of a long hallway of art exhibits is BOA. Plastered on the front door to the independent publisher is a big sticker that says “BOA is Here,” preparing the visitor for a dim office space with a seemingly infinite amount of bookshelves.

BOA has always been a place for women and people of color writers to find a place for their work: in 1984, BOA published Carolyn Kizer’s Yin after nearly every publishing company had turned it down. It subsequently won the Pulitzer Prize for Poetry in 1985. Shortly thereafter, BOA published Li-Young Lee’s first poetry collection, Rose, in 1986 and the first of many collections with Lucille Clifton in 1987. Nowadays, among many other things they do, BOA spotlights poetry collections by women of color in their Blessing the Boats selections. The title honors Lucille Clifton’s National Book Award-winning collection, Blessing the Boats: New and Selected Poems.

Today, Peter Conners is the Executive Director at BOA, working with an intimate team within BOA, board members, and plenty of supporting members from around the country. Seemingly, poetry continues to thrive as BOA’s sales are better than ever, perhaps a testament to how necessary literature becomes during difficult times in the world.

BOA is at the heart of the literary world in Rochester — if not a thriving literary presence in the country. Poets and writers return time and time again to work with BOA, regardless what larger literary giant they have published with. Their dedication to art based on integrity and diversity continues to push them to great heights. BOA won the 2001 New York State Governor’s award for overall artistic excellence, the only New York State not-for-profit literary publisher to receive this honor.