"Much of Ward's notes are obviously meant for himself, making them hard to decifer, but a poignant example of the fast-paced nature of editing."

On the title page, editor Thom Ward leaves personal notes to himself and Li-Young Lee: he comments that the title should include "My" and asks Lee to include 2-4 more poems by January 2001 to make a full manuscript. At this point in the development of Book of My Nights, the manuscript only had 28 poems.

Ward also mentions the last poem "The Dove," saying it ties the whole book together. Notably, "The Dove" is not the final poem in the published Book of My Nights. Much of Ward's notes are obviously meant for himself, making them hard to decipher, but a poignant example of the fast-paced nature of editing. 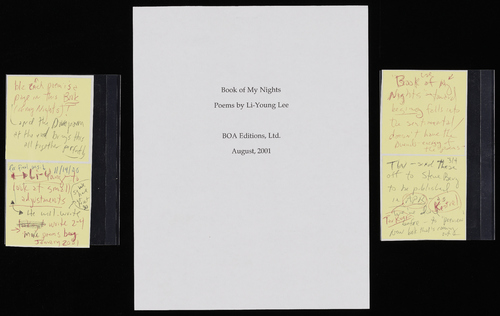 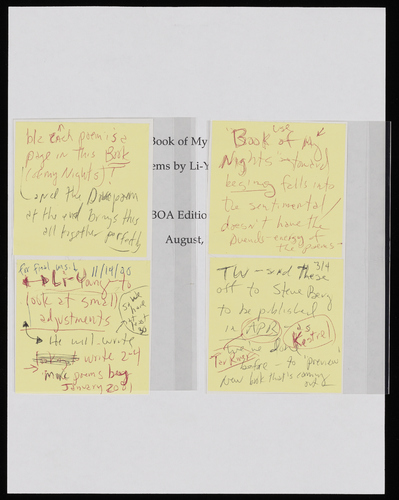 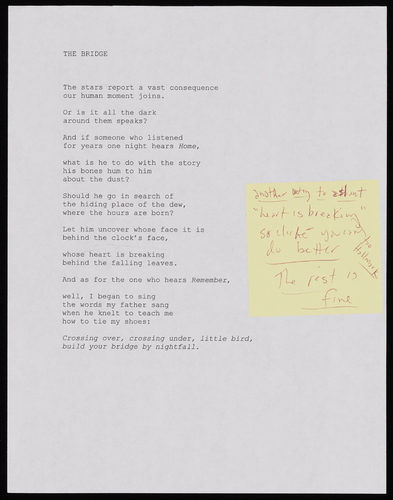 The 2000 manuscript had plenty of these yellow post-its with Ward's iconic red ink on them. In going through the manuscripts, I found that most poems either don't have notes attached, ask clarifying questions, or are positive reviews. In this review, Ward's only edit is the cliche nature of "heart is breaking" in the seventh stanza. Cliches can be useful when wanting to depict a simple or universal emotion that can be understood by many. Here, it is difficult to say whether Lee was truly attempting to convey this universal understanding or if he did unintentionally use a cliche. Ward certainly believed it was the latter.

Regardless, the stanza reading "whose heart is breaking / behind the falling leaves" does not appear in the final published edition of Book of My Nights. View the finished version of "The Bridge" in the last section of this project where select poems from Book of My Nights have been digitized and displayed. 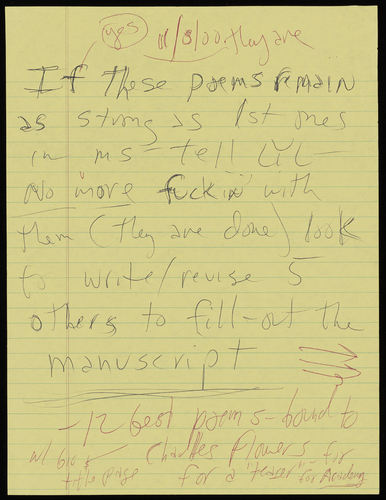 Notes included at the end of manuscript from Ward to Lee. 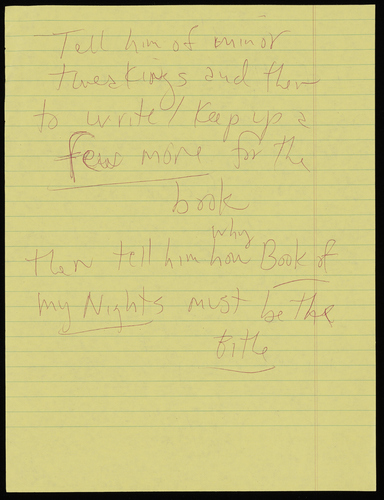 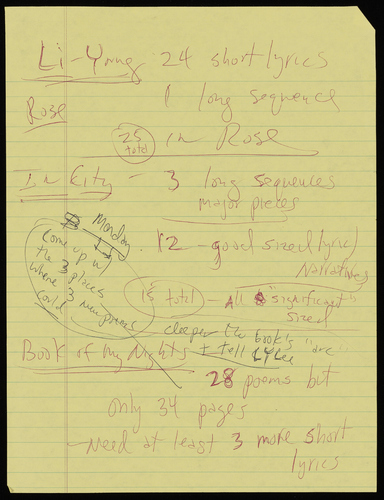 At the end of the 2000 manuscript, Thom Ward included three pages of yellow notes, scribbling down his thoughts. A couple things worth noting:

Thom is quite confident in the strength of the poems that Lee had sent him, even as a beginning draft. He also continues to be adamant about the title of the book being "Book of My Nights," a line taken from ____ (must look up poem); he mentions this edit a couple times throughout the entire manuscript. Thom also goes a little more in-depth about the length of the book, comparing the number of poems in the manuscript so far to how many were in Lee's previous collections.

Seen here is also the beginning of BOA's efforts to advertise and push out Book of My Nights, even before its publishing: Thom mentions sending some of the poems to the "Academy" as a teaser. Later in this project, there are more frequent mentions about marketing, awards, and more, showcasing the logistical side of publishing.