"We're the nervous ones."

The first iteration of “Praise Them” in RBSCP archives is in a collection of poems that Li-Young Lee sent to Thom in 1997 as contenders for Lee’s next poetry collection. Out of the initial submissions, only “Praise Them” made it into Book of My Nights. (Note: all bolded text within the poem is my emphasis). 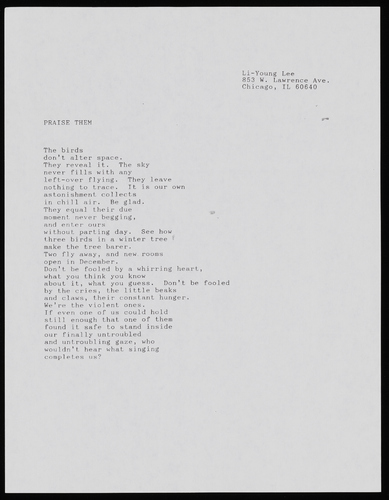 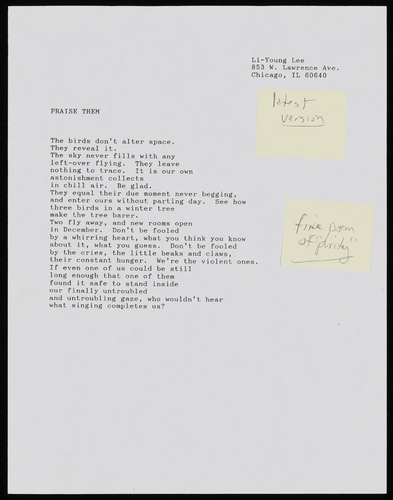 The main differences in the editions of “Praise Them” center on syntax. In March 1997, the poem had remarkably short lines and frequent line breaks in the middle of sentences. Take the first four lines —

They reveal it. They sky

never fills with any…”

— very rarely is a sentence finished in its own line. This creates a sense of separation between the object in question and its action. Aptly, “Praise Them” is about the disconnect between human understanding and nature. Lee separates lines in this way to create physical space within the poem, placing further emphasis on this gap.

However, the May 1997 draft introduces a new structure —

While the lines are still fairly short, there are far fewer sentence breaks. An author does this for several reasons: to minimize pauses, to introduce an idea sooner, or to convey a different emotion. In the case of “Praise Them,” the former seems to be Lee’s intention. Lee makes the poem more digestible, while still successfully conveying a sense of disconnect with relatively short lines.

“Praise Them” in the November 2000 manuscript combines the two previous ones. The lines are still short, but Lee finds a happy medium, reverting more to the shorter flow of the original March 1997 poem. A perfect example of this is near the end: in line 21, Lee writes in a standalone line, “We’re the violent ones.” On its own, the line is even more poignant without other ideas or thoughts obscuring it; it becomes an attestation rather than a sentence. 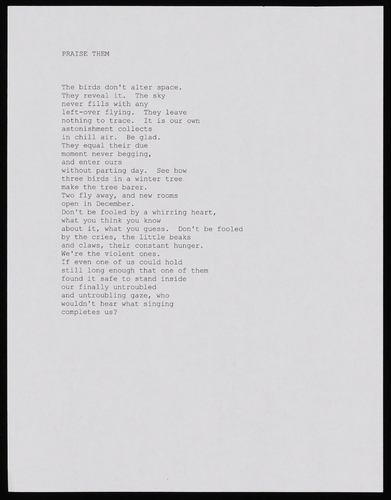 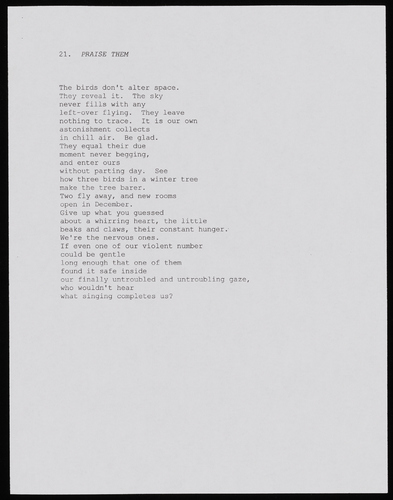 Another interesting point of observation in “Praise Them” is one particular diction choice in the March 1997 rendition. Here, Lee writes,

“If even one of us could hold

still enough that one of them

found it safe to stand inside

and untroubling gaze, who

However, in May 1997, the word “hold” at the beginning of the sentence changed: “If even one of us could be still  / long enough that one of them…” The difference between “hold” and “be” is small, but potent in this context. “Hold” implies an act of detaining or keeping an individual, but “be” simply means to exist. There is no aspect of physicality or force with “be.” With this change, Lee makes it clear that under no circumstances — not even force or restraint — can human beings fully grasp the ways of the natural world. In addition, the word “long” completely changes the action of the sentence; now the question is not about how still someone can remain, but about the length of time they can do so.

In May 2001, “Praise Them” had some fairly notable changes. While the syntax of the poem remains fairly similar to the previous versions, the differences in word choice are striking. Examples of these include “Don’t be fooled / by a whirring heart…” replaced with “Give up what you guessed / about a whirring heart…” and “We’re the violent ones” replaced with “We’re the nervous ones.”

Human beings are now described as nervous — an attitude of confusion and apprehension toward the natural world rather than anger or brutality. Yet Lee is not quick to dismiss violence as he describes the human race as a “violent number.” He elaborates on this: Lee is no longer concerned with how long people can be “still”, but is now questioning how long we can be “gentle.” With these changes, Lee places leniency on people, allowing us genial and tame movement rather than stillness.

In an editorial sense, the published version of “Praise Them” sharing a similar look as the original draft shows that a poem does not need to drastically change before it gets published — perhaps a point of encouragement for young writers. However, it is clear that as time changes, so does the author’s understanding of what they’re writing. Naturally, the poem will adapt to this growth. For Lee, his tone softens in the four years that “Praise Them” goes through edits. The final draft adds a little bit of humanity as he acknowledges that people are ultimately nervous and confused around nature. All we are called to do is appreciate and observe — at least attempt to bridge the gap.