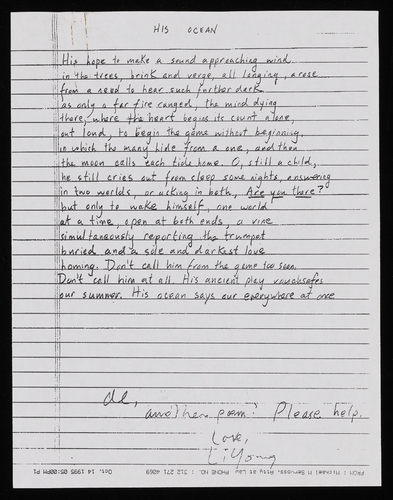 Li-Young Lee’s poetry often looks at the metaphysical relationship humans have with nature, and “His Ocean” is no different. The imagery draws readers in, while the overall ambiguity leaves them reconciling the role of this unidentified “him.” However, while “His Ocean” was included in the first manuscript for Book of My Nights, it was not published in the collection nor any subsequent ones.

The initial handwritten poem was written in 1995 and sent to BOA founder Al Poulin Jr., who was also Lee’s mentor and professor. Lee also sent other poems to Poulin along with “His Ocean,” asking for help and criticism, with Lee obviously having his next collection in mind. The note at the bottom shows Lee’s affection for Poulin, signing his request with “Love, Li-Young.” Lee had a clear relationship with Poulin, as also seen in Poulin’s recommendation letters in the earlier section, “The Author’s Mind.” 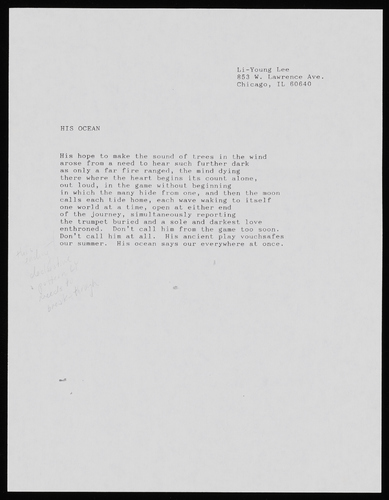 This earlier version differs greatly from the later 1997 edition up until the last four lines, which remained exactly the same. At first glance, the greatest difference is a lack of punctuation in the later version: the first sentence continues all the way into the 11th line without periods, juxtaposing the last four lines, which are short and command-like. The first edition also includes a section about “him” still being a child, crying out from his sleep. It is interesting that Lee later removed this detail as it personalized the main character and removed some of the prominent ambiguity in the later 1997 version. 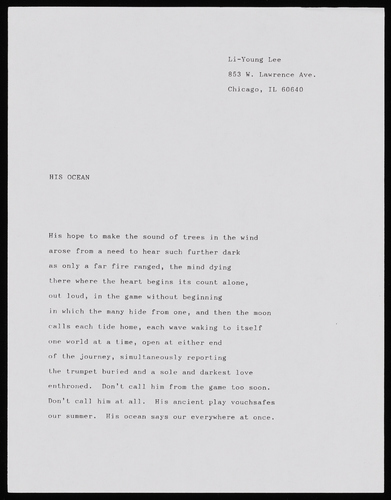 Preliminary draft from May 1997.

The two later versions (March 1997 and May 1997) are exactly the same, though in the May 1997 version, there is a note on the side of the poem. Most likely left by Thom Ward, the note implies a dislike of the repetitive declaration at the end of the poem, which is actually arguably the clearest part of the poem. Whether or not Lee agreed with that, is not something readers can determine as this poem was never published. 1997 the last time before now that “His Ocean” was presented to readers.

← Praise Them
Putting it All Together →
A Closer Look: "Praise Them" & "His Ocean"
His Ocean