Emanuel Goldberg was a native of Rochester, and earned his master's degree in chemistry from the University of Rochester in 1933. He served in the U.S. Army during WWII, and then returned to Rochester where he built the Nalge Company into an international plastics firm. Long recognized for his selfless public service and generous philanthropy, Mr. Goldberg was an outstanding community leader whose positions included president of Temple B'rith Kodesh, the Jewish Home in Rochester, the Jewish Community Federation, and the international agency American Jewish Joint Distribution Committee. Emanuel Goldberg served as a trustee of the University of Rochester until his death in 1999. 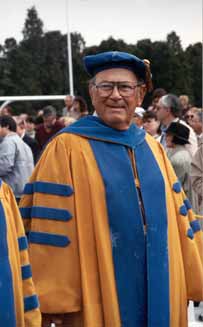 "He was like a broad, strong, tall tree with deep and enduring roots, sustaining his family, the community, and the Jewish world he loved. This tree was tall and strong, able to shelter many in its thick and plentiful branches and limbs that grew from a solid, straight and tall trunk, like his large and wonderful family. The Psalmist's words aptly describe Manny: 'He is like a tree planted beside streams of water, who yields its fruit in season, whose leaves never fade, and whatever it produces thrives and grows.'"

From the eulogy given for Emanuel Goldberg on January 5, 1999 at Temple B'rith Kodesh, by Rabbi Lawrence Kotok. 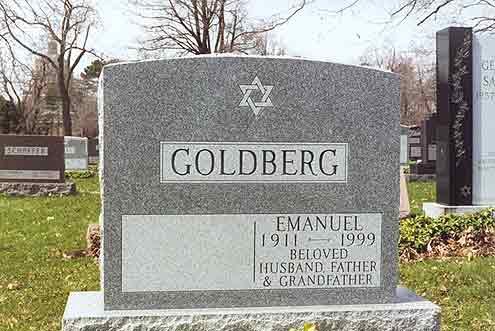 Prominent on the stones in Jewish sections of Mt. Hope is the Shield of David (Magen David). Also known as "Solomon's Seal," this six-pointed star is an ancient symbol of divine protection and, today, an important symbol of Judaism. The star is formed by two interlocking equilateral triangles. Some believe that the six points stand for the six days of creation, while the combined triangles represent the harmonically ordered duality of divine creation.