Henry Augustus Ward (1834-1906) was born in Rochester, and his interests in science took him from the Middlebury Academy to the Paris School of Mines. As a scientist and explorer, Ward collected geological specimens from Europe and Africa, and gathered an impressive collection of meteorites. In 1860, he returned to Rochester where he taught natural science at the University of Rochester. While in Rochester, he founded Ward's Natural Science Establishment, the internationally known provider of educational materials in science. 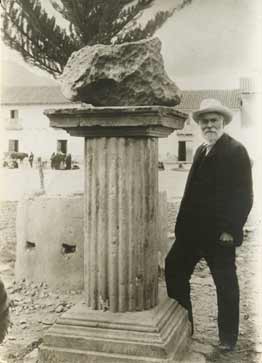 Claude Bragdon (1866-1946) was a talented Rochester architect, designer, and author, also noted for his innovative funerary monuments, including that of geologist Henry A. Ward and family. This striking boulder, flecked with red jasper, originated in Georgian Bay, Canada. 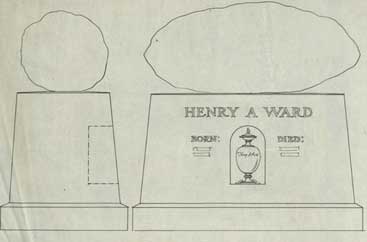 Once called the "last great stones" by pioneers, large boulders have been used by Americans as individual tombstones and as memorials to the dead. A large, majestic rock exudes strength and permanence, and stands in striking contrast to the frail human condition. Whether they fell from the sky or were left behind by sheets of ice, stones have often served as sacred sites. The Bible tells that Jacob slept on a stone and dreamed of God, that Moses struck the rock and a spring came forth, while a boulder was rolled away from Jesus' empty tomb. Perhaps inspired by these or other stories, boulders hold their ground at the University of Rochester (see the memorial for Thomas T. Swinburne) and Mt. Hope cemetery. 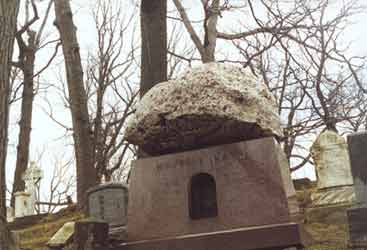