The Productions: Gondoliers, Utopia Limited, and the Grand Duke 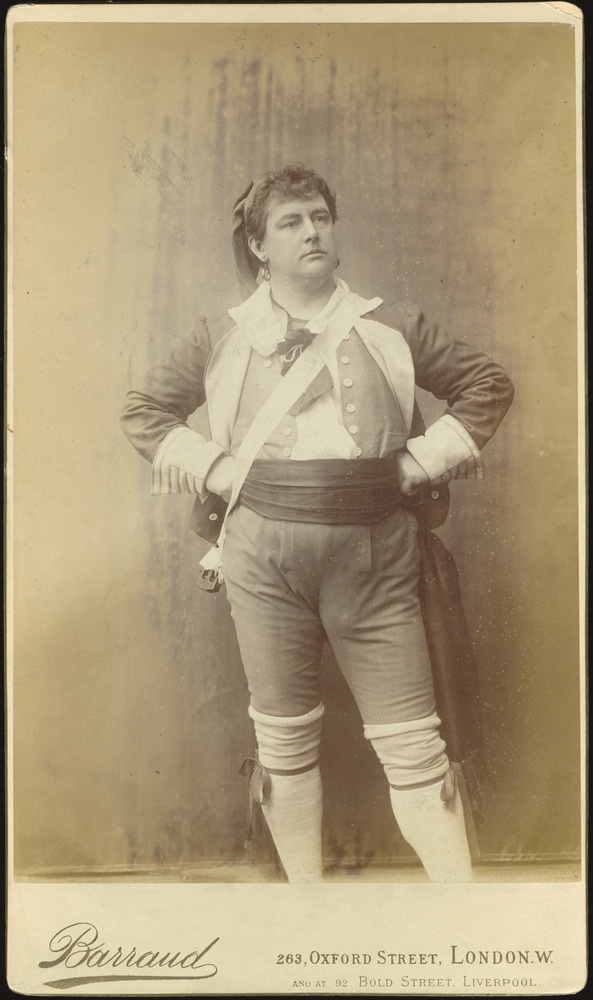 Imperial cabinet photograph of Rutland Barrington as Giuseppe in the original produciton of The Gondoliers.

The Yeomen of the Guard had convinced Sullivan to pursue his plan for a serious opera, and he told Gilbert of his dislike for writing more comic operas. The partnership was in jeopardy until it was suggested that Sullivan could write a grand opera with another librettist after writing a comic opera with Gilbert. Sullivan agreed, and their next joint opera was The Gondoliers (1889), a particularly happy and sympathetic collaboration. After a brilliant London reception, Carte produced The Gondoliers at the Park Theatre in New York, where it was received so poorly that it was nicknamed "The Gone-Dollars." Carte traveled to New York, and completely restaged and partially recast the production at another theater. Americanizations were written into the libretto as part of the overall attempt to make the opera more palatable to American tastes. While this second attempt met with a better reception, The Gondoliers was considered a failure in America. 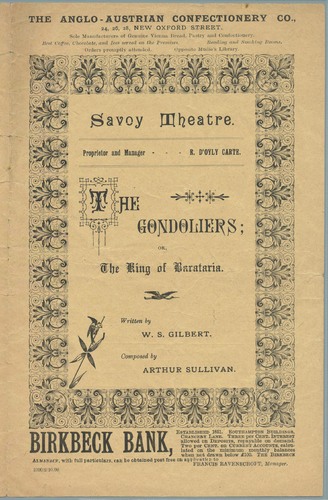 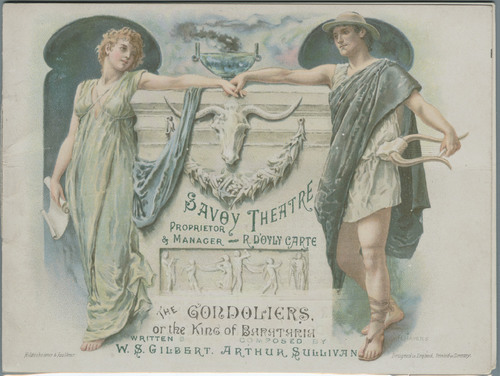 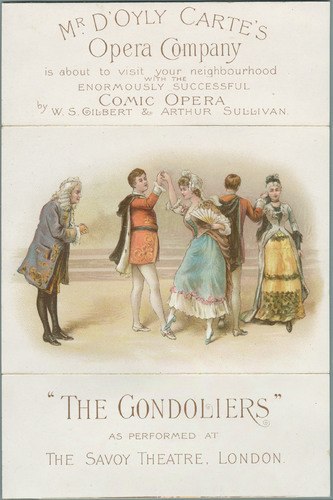 A metamorphic advertisement for Carte’s traveling company. (Gondola opens to a color lithograph of the gavotte scene.) 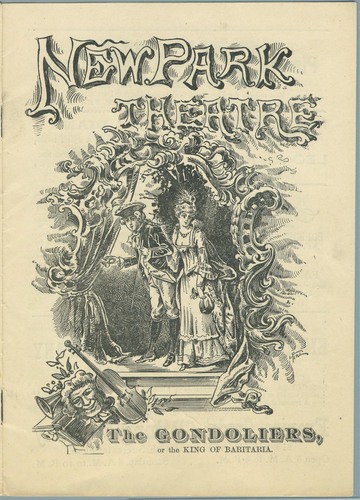 D’Oyly Carte’s Opera Company in the first New York production of The Gondoliers. 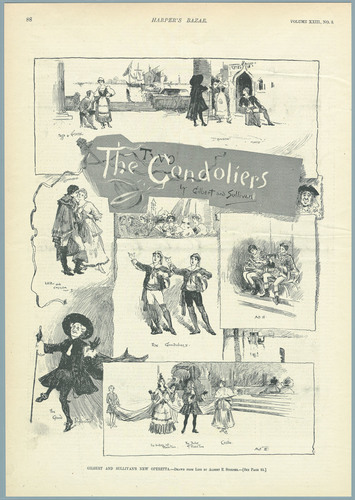 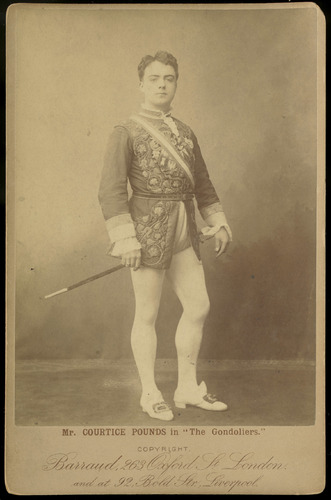 Courtice Pounds as Marco in the original production of The Gondoliers. 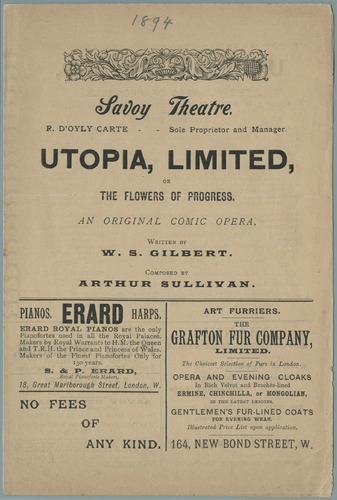 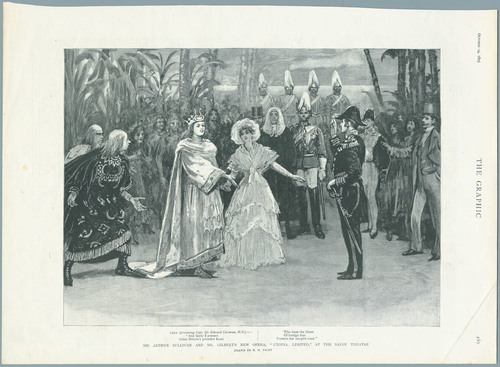 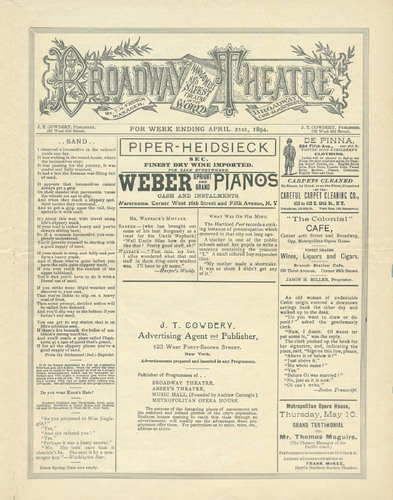 The Gilbert and Sullivan partnership with Carte ended in 1890, after acrimonious accusations regarding expenses incurred at the Savoy Theatre. Eventually, the dispute pitted Gilbert against Sullivan and Carte in a court of law. Gilbert was now free to collaborate with other composers and Sullivan to compose in a more serious vein with other librettists, but their collaborative sympathy was lacking in each case. After fits and starts, the two were brought together again by Carte for a brilliantly staged Utopia, Limited (1893). Though their return was welcomed by the British public and press, the new opera lacked the sparkle of the previous ones. When it opened in New York at the Broadway Theatre in a strong production, it lasted six weeks. 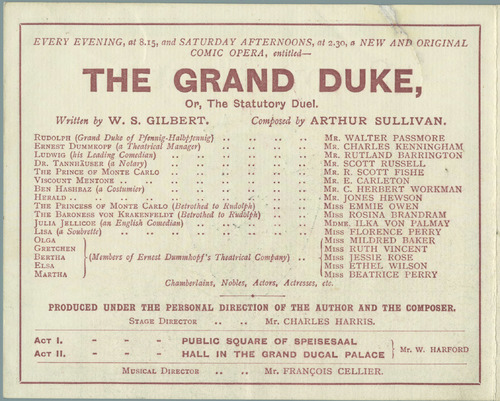 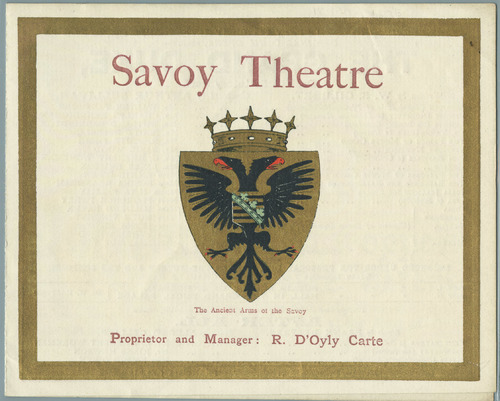 A second copy of the Grand Duke at the Savoy Theatre, showing the Savoy coat of Arms. 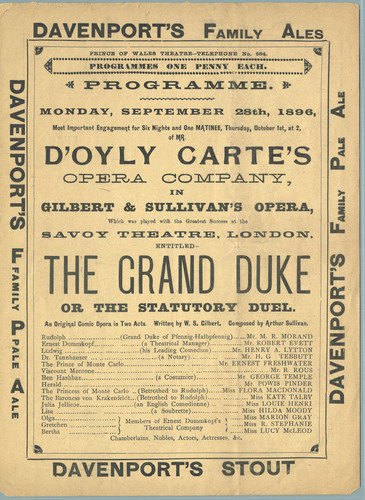 Continued disputes allowed the former partners to drift apart once more. Gilbert and Sullivan each collaborated with others for respective comic operas, but were able to be brought together by Carte one last time for The Grand Duke (1896). Gilbert was far past his prime in his libretto, while Sullivan’s music showed evidence of bowing to more contemporary musical tastes. It was not successful in London, and a New York production was never attempted.