In 1959, Wesleyan University Press published Apples from Shinar, a collection of thirty-two lyrics and one long narrative poem, "The Shepherd," which was to become a central episode in Horatio (1961). In the ten years since Aspects of Proteus, the poet had been widely published in major periodicals, had given many readings and recorded his poetry for the Library of Congress, and had spent a year at Yale on a Ford Fellowship studying the interrelationships of poetry, art and music, and science.

Now, in the new book, Plutzik's grasp of his proper themes seemed to acquire a new strength. A kind of intuitive openness, a mystical tendency sometimes felt in the earlier poems, now came to the center of many of the poems in Apples from Shinar, and it appears that Plutzik was finding his way back into the mystical roots of his Jewish heritage. Poems from the book were widely anthologized; distressingly, it is the only one of Plutzik's books still in print. 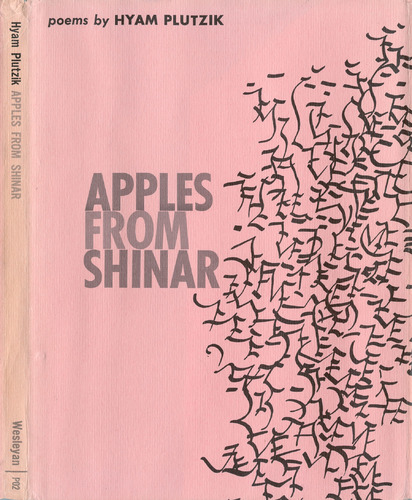 Fourth in the prestigious Wesleyan Poetry Series, Apples was issued in hardcover and paperback simultaneously. 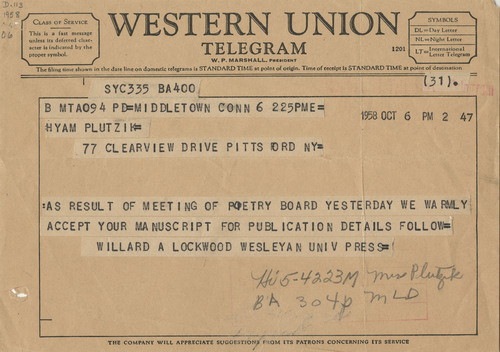 Lockwood, Director of the Wesleyan University Press and founder of the Poetry Series, sent a telegram to HP with the news of Apples’ acceptance.

Hall, then on the English faculty at the University of Michigan, was a member of the Wesleyan editorial board, and he and HP kept up a lively correspondence until HP's death. In this letter Hall argues against HP’s original choice of a title: "We all dislike 'The Unblest Mythmaker' as a title, Hyam." 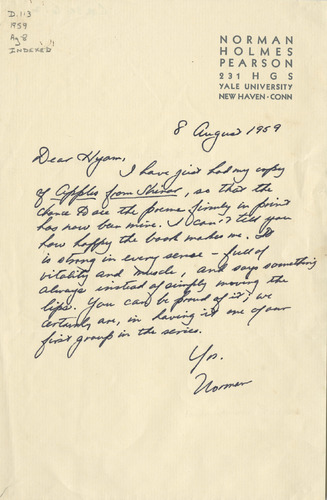 A schoolmate of HP’s at Yale, Pearson—by now a distinguished critic and scholar and a member of the Wesleyan editorial board—wrote to congratulate HP: "I can't tell you how happy the book makes me."