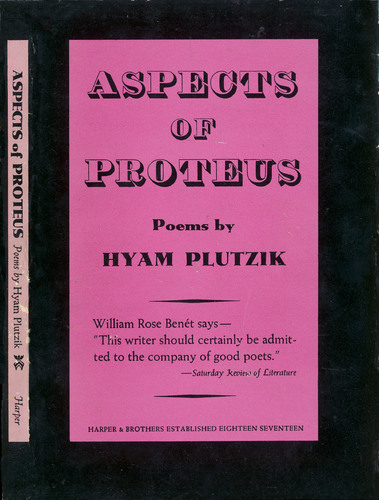 Hyam Plutzik was thirty-eight when Harpers published his first collection of poems, Aspects of Proteus, in 1949 (the same year as Pound’s Selected Poems and Frost's Complete Poems). He had been writing verse seriously for about twelve years, with two of those years mostly lost to overseas military service.

The oldest poem in the book, "My Sister," dates from 1937, and it reveals something about the early-postwar literary scene that none of the pieces in the book had been previously published in magazines.

Although he saw fit to end the collection with his long Yale Prize poem of 1941, Plutzik otherwise staked his initial poetic claim on shorter lyrics. Mature and polished poems, they exhibit most of his abiding interests: the relations between science and the imagination, the tragic meanings of the War; the rich mysteries of ordinary private lives; the enigmatic ways Nature bears witness to human life and death. 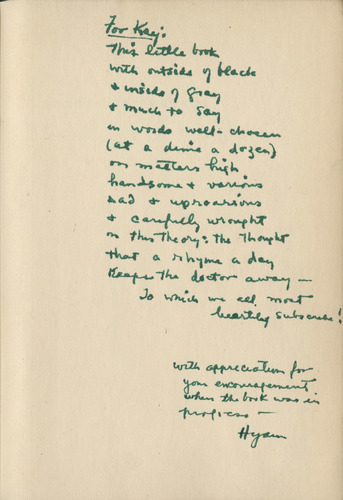 Inscribed by HP "For Kay"—Kathrine Koller, Professor of English and chairman of the department from 1946 to 1958. 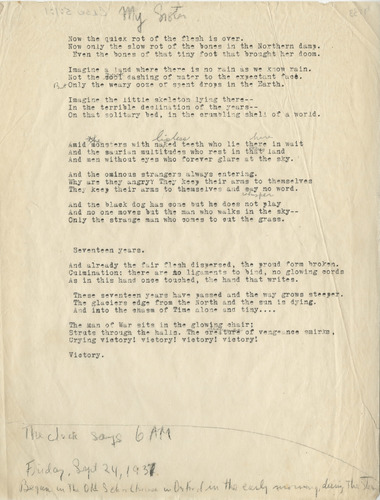 "My Sister." Original typescript. One page.

HP notes: "The clock says 6 AM Friday Sept 24, 1937 Begun in the old schoolhouse in Oxford in the early morning, during the storm." Aspects of Proteus covers more than a decade of writing: the oldest poem in it is "My Sister," to HP's sister Molly, who died when he was nine.

Mrs. Bueler, whom the Plutziks knew while stationed in Louisiana in 1944, dates and places the composition of one of the most popular poems in Aspects, "To Those Who Look Out the Window." 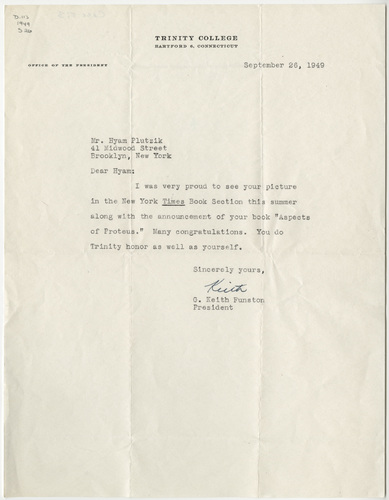 Funston wrote about Aspects of Proteus as HP’s classmate and friend at Trinity; later he became President of the New York Stock Exchange.