Like all poets, Plutzik published fewer poems than he wrote and collected in his books far fewer than he published. The Archive is rich in such overlooked work, some of it no more than the compost of the writer’s achievement; some of it as good as anything he wrote ... for example, the lovely prayers he translated from the Hebrew for a Jewish prayerbook project of the 1950s. The translations were never published, but some of them are in the manuscript of a new collection on which Plutzik was working when he died. Variously titled "Short Poems," "The Unblest Mythmaker" (which was the original working title of Apples from Shinar), and, poignantly, "Last Poems," these poems are vintage Plutzik, with strong admixtures of humor and vivid but never morbid mtimations ofmortality. And he had for some time been looking beyond to what would have been a major work, an ultimate test of his powers: a book-length suite of poems on the Jewish Holocaust in Europe. 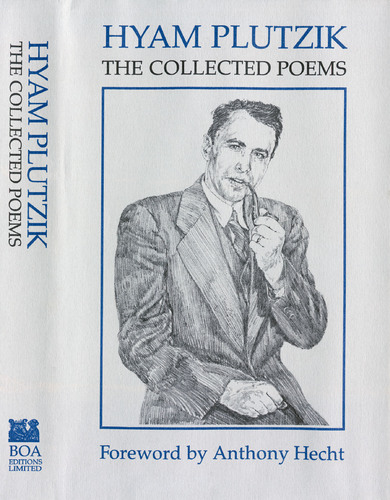 After the release of Apples from Shinar, and through the publication of Horatio, Plutzik was at work on another collection of poetry. The poems to be included in the manuscript were variously titled "Short Poems," "The Unblest Mythmaker"—which was the title he sought to use for Apples from Shinar—and "Last Poems."

The project was left unfinished at the time of his death, but a number of his unpublished works would appear in various publications over the next years—in the journals Forum and Niagara, among others—and a collection of his work, including the poems from the three volumes published in his lifetime as well as a selection of his unpublished material, was issued in 1987 by BOA Editions. 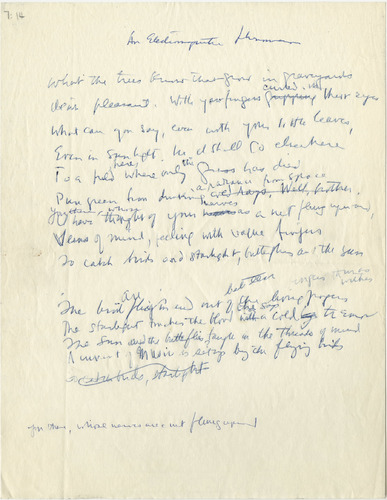 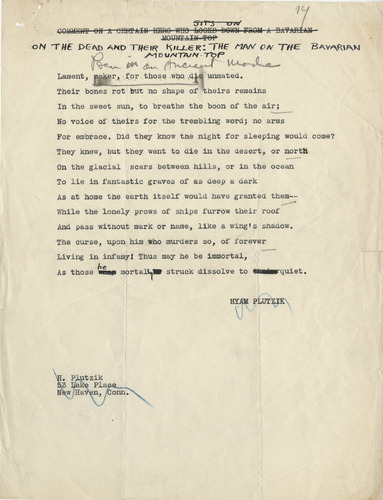 Typed draft with revision, "On the Dead and Their Killer: The Man on the Bavarian Mountain-Top." 1p. Written revisions.