The most visible monument to Plutzik’s memory is the Plutzik Memorial Reading Series, which has brought scores of noted authors—among them John Ashbery, Thom Gunn, and John Barth—to the University of Rochester since the autumn of 1962, when it began, thanks to a gift from Joseph C. Wilson, with Professor Russell Peck as its first director. Other events have been held in the poet’s honor, among them the 1982 exhibit which preceded this one.

The documentary film Hyam Plutzik: American Poet was released in 2007, featuring at the Rochester Jewish Film Festival, with a later European premiere in Berlin. And, while Plutzik’s own poem on the memory of the Holocaust remained far from completion at the time of his death, a number of his published poems were dramatized in Robert S. Cohen’s "Of Eternity Considered as a Closed System," first performed at "Partners of Hope," held in 2007 at Carnegie Hall as a concert held shortly after International Holocaust Remembrance Day in honor of the acts of courage that helped spare much of Bulgaria’s Jewish population from the death camps.

Program for screening at the George Eastman House Dryden Theater, May 14, 2007. 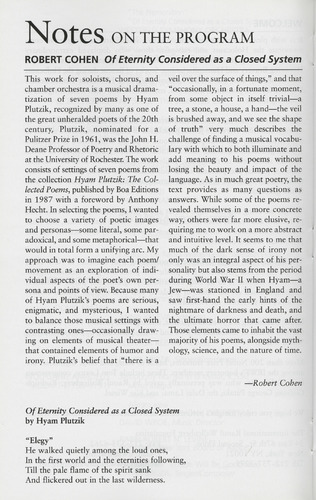