The Prose of a Poet

Like many a poet, Plutzik initially aimed at writing prose—journalism and fiction. Poetry took over, happily, but it is clear that he enjoyed writing prose, and did so throughout his career in a variety of forms: children's stories, comedic stories, science fiction (under the pen name "Anaximander Powell"), as well as philosophical and literary essays.

Some of the children’s stories were inspired by and created for his own family—the queen of the land portrayed in the "Tickletoby" stories shares his daughter's name, Roberta.

Among the last prose work is his fine appreciation of Theodore Roethke, one of the first studies of its kind, and regrettably never published (although, characteristically, Roethke heard of it and wrote to HP suggesting how it might be deployed to Roethke’s advantage). 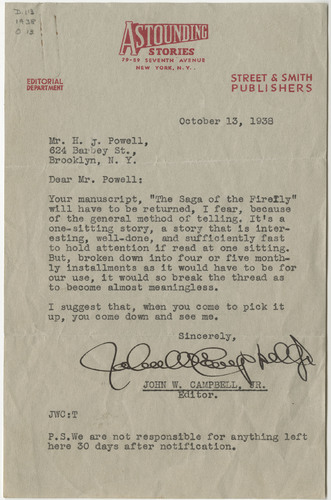 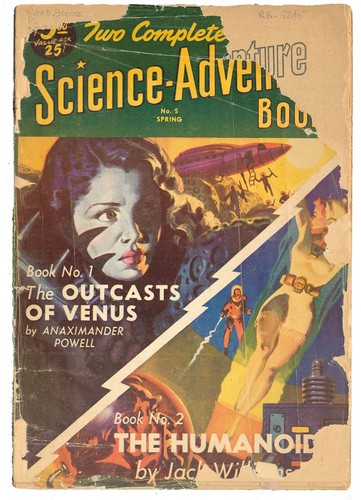 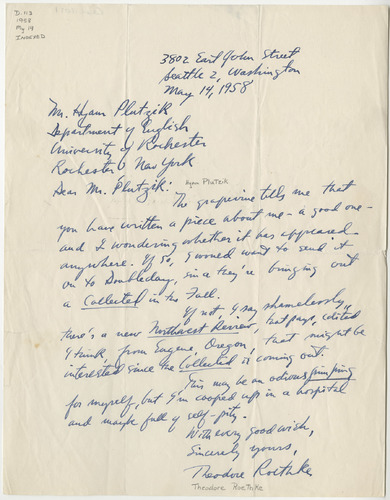 Autograph letter, signed, to HP from Theodore Roethke. One page, May 14,1958.

At the time Roethke wrote to HP about the essay on him, he was in a Seattle sanitarium recovering from one of his recurrent manic sessions. The "Collected Poems" is Words for the Wind (1958), winner of the National Book Award for 1959.

HP's essay was published alongside one on "Creativity in Science" by his colleague, University of Rochester physics professor Everett M. Hafner.

Posthumous publication of excerpts from HP's unpublished “Tickletoby” cycle of stories, songs, and poems for children.